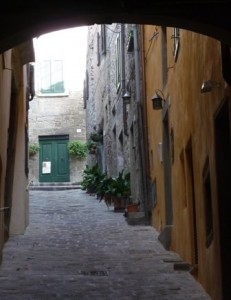 Because Jacqueline really identified with the movie version of Under the Tuscan Sun and saw it several times, she was very interested in seeing Bramasole, the home of the book’s author, Francis Mayes, in nearby Cortona.
We took my mother to see Bramasole in 2002 so we knew how to find it but the last time we were here, we couldn’t get manage to retrace our route to it.
In hopes we could figure something out this time, we descended Monte San Savino’s east-side hill and crossed the expressway in the valley and up to the west-facing hills crowned by Cortona.
We were surprised that although there are plenty of parking lots for the summer tourists, they were all filled – even in the dead of winter. We finally grabbed one and began the long steep climb from the tall stone gate to the piazza in the center of town, peeking up and down steep cobbled steps as we went.
We walked down to the edge of the smaller piazza in front of the little church and looked off the edge at the olive farms, vineyards and little villages to the north. Just across the piazza Jacqueline also got a long look at the the famous “Annunciation” by Fra Angelico in the little Museo Diocesano.
We all met for a bathroom break at a bar where we got directions to Bramasole. 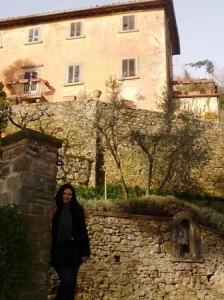 The bartender said the way we took in 2002 is now mostly pedestrianized so we had to go around the town the opposite direction. 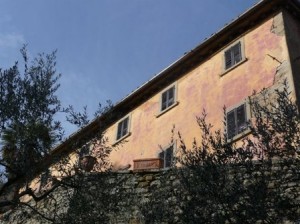 that looks to me like raspberry and apricot sherbet stirred lightly together.

We used the GPS to get us to lunch in Monticchiello in another valley, the magic Val d’Orcia the site of many battles for Tuscan preeminence first between competing noblemen and finally between Siena and Florence. Other hilltop strongholds turned into towns in the Val d’Orcia have names like Montalcino, Rocca d’Orcia, Radicofani, and Castiglion d’Orcia – high points in a battlefield where resisters could fight their last stand. But we’re here to eat! And to eat at one of our favorite restaurants on earth – La Porta where Daria greets and seats us like family. I was able to show her an email on my cell phone we just received from Ed and Sandy reminding us to give Daria a hug from them. Daria said, “Well, don’t forget!” and gave me another hug for Ed and Sandy. I don’t know how this works but now I get to pass her hug on to Ed and Sandy. How did I get in the middle of this? 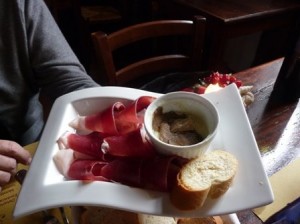 I had a plate of sliced Cinta Senese ham with melted pecorino cheese and truffles (we’re getting more chances than ever to enjoy the season’s bounty of truffles this year) to start. 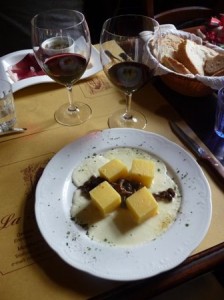 Anne and Jacqueline both had cubes of polenta on melted pecorino with mushrooms. We enjoyed this with sips of the best wine of the trip, a just released 2003 Brunello di Montalcino.
For first courses we had farro risotto with vino nobile and cornmeal gnocchi with pecorino. Then for secondi, I had two fried eggs with sliced truffles,
Anne had a rack of lamb (which she could only eat a bite or two – the first courses were so good she just had to eat every bite!) , and Jacqueline a plate of sliced pecorino with honey. We finished lunch off with two digestivi, one made of verbena, and the other of pear and pomegranate. Daria included a bottle of the latter as a gift. We’ll be proudly sharing it with friends after dinner in Virginia soon.
Long after the medieval battles in this valley, it again became the site of unbelievable hardship, suffering, and even the worst kind of cruelty during the occupation of the Nazis during World War II. One of the sad but triumphant stories is captured on a plaque just outside La Porta in Monticchiello. As we were walking up to read it an old man in a green Ape coasted downhill past us then turned around and drove back uphill when he saw we were reading the memorial plaque. 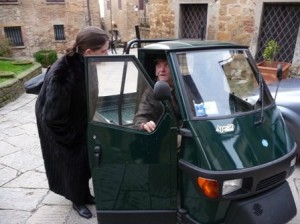 He said he was one of the young partisans whose photos are on an adjacent plaque who secretly resisted the Nazis by sabotaging their efforts and sending valuable military information to the Allies. He asked us where we were from and when we told him the USA, he said, “Those guys helped us beat the Nazis!” Then this hero’s eyes teared up as he remembered, saying “Those were brutal times.” He tried to explain with his hands where he was on the day memorialized on the plaque and where the Nazis were and how it happened. He seemed so happy to be living now in this peaceful valley. When we asked, he said his name is (ironically) Adolfo. We were very happy that he turned his little truck around and are truly privileged to have met a real live hero of the resistance.
Then we wandered over to a fabric shop to see pillowcases and hand towels crafted from beautiful local materials. Letizia Capelleti has run this shop for 60 years. Now her son mans the counter while she charms the visitors. 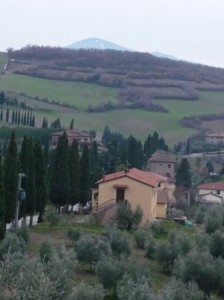 From the terrace outside the village walls, we spied what looked like a ski run on Monte Amiata. 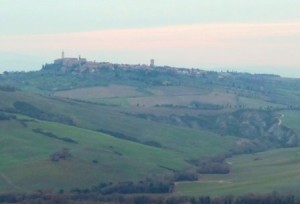 Next stop, Pienza – gleaming against the sunset across the valley. 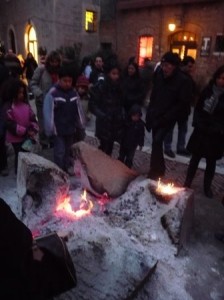 In Pienza’s beautiful Renaissance square, there are a couple of huge yule logs burning. It’s difficult to walk by without stopping to warm up our hands. 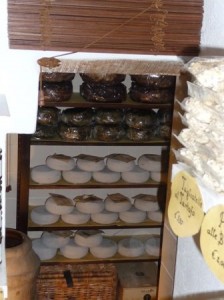 After the requisite shop in a pecorino cheese boutique (Pienza’s prized local specialty), where the smell is almost overpowering, we pile in the car to return to Monte San Savino.
Jacqueline visited the antique shop again, and the owner took her to a musty dark storeroom so she could see his hundreds of old doors – all in need of restoration.
For dinner today we walk through the huge stone gate of Monte San Savino to Ristorante La Terrasse. Kirk picked a particular wine as a surprise for Jacqueline – Bramasole! It’s a very good syrah from an Antinori vineyard in Cortona.
La Terrasse is owned and managed by a relative of our hotel’s owner, and is well worth a visit – we’ll remember to include it on future trips. Anne’s appetizer, a pear pecorino and truffle tart, brought ooh’s and aah’s and rolled eyes – a worth-the-trip treat!
Kirk’s Extravanza del Chef 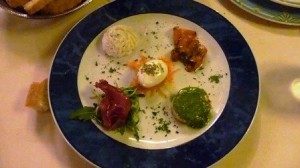 was a full two plates-full (one hot and one cold) of local delicacies.
Wandering back to our hotel, we thought of taking a post-dinner walk around the town, but lazily fell into bed instead.