Skeletons in the Market Square 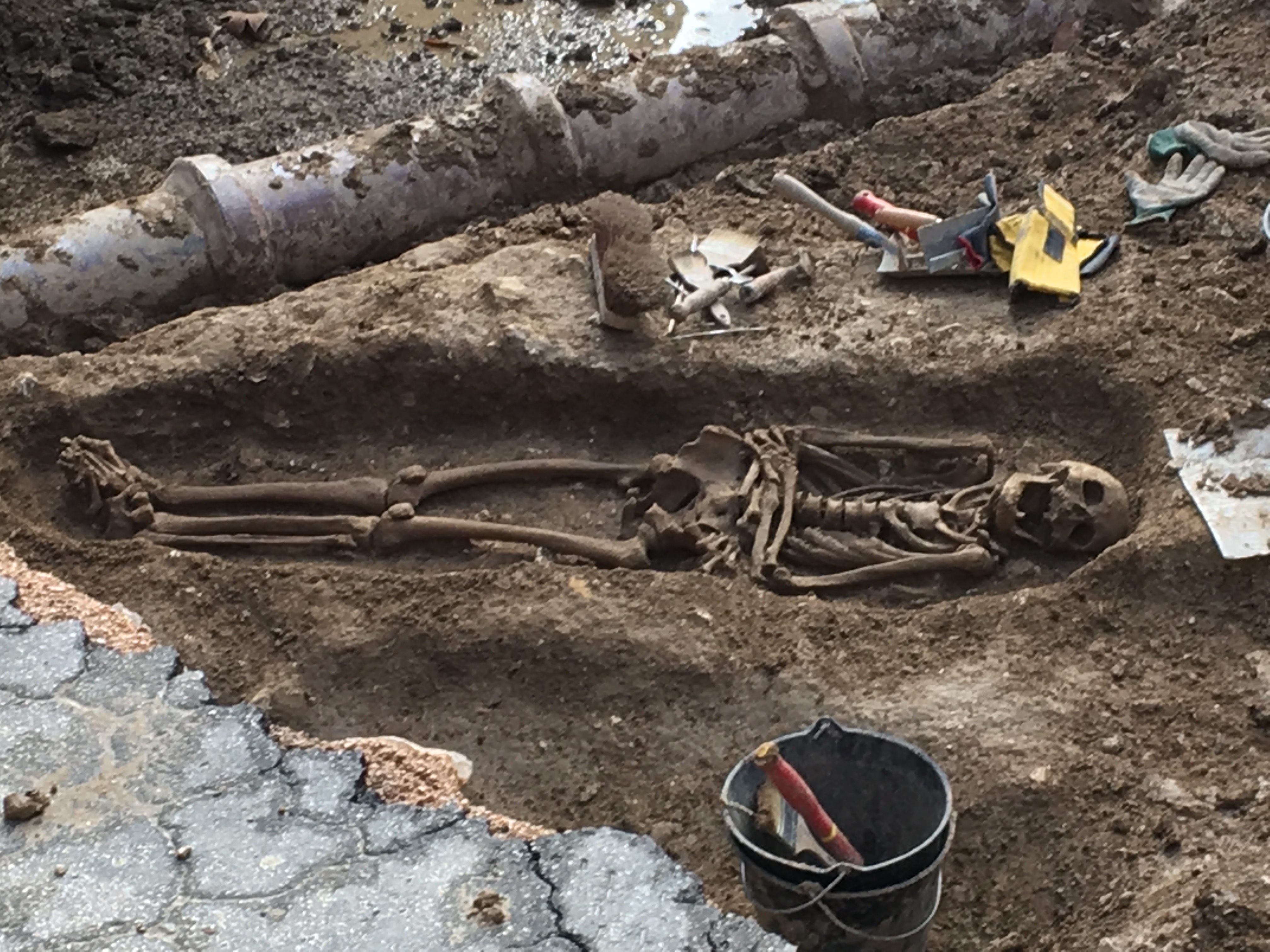 Interested in a Music and Markets Tour? We’d love to hear from you!  How about an unforgettable holiday with us at  New Years’ Jazz in Italy?

A downtown construction project comes to a halt because a worker discovers a coin or a ceramic shard from a previous culture. Archeologists are called in to sift through the area and after a couple of weeks give the all clear to continue. The delay is built in to the schedule – no big deal. But sometimes, as happened this year in our second home town of Aix-en-Provence, this happens: 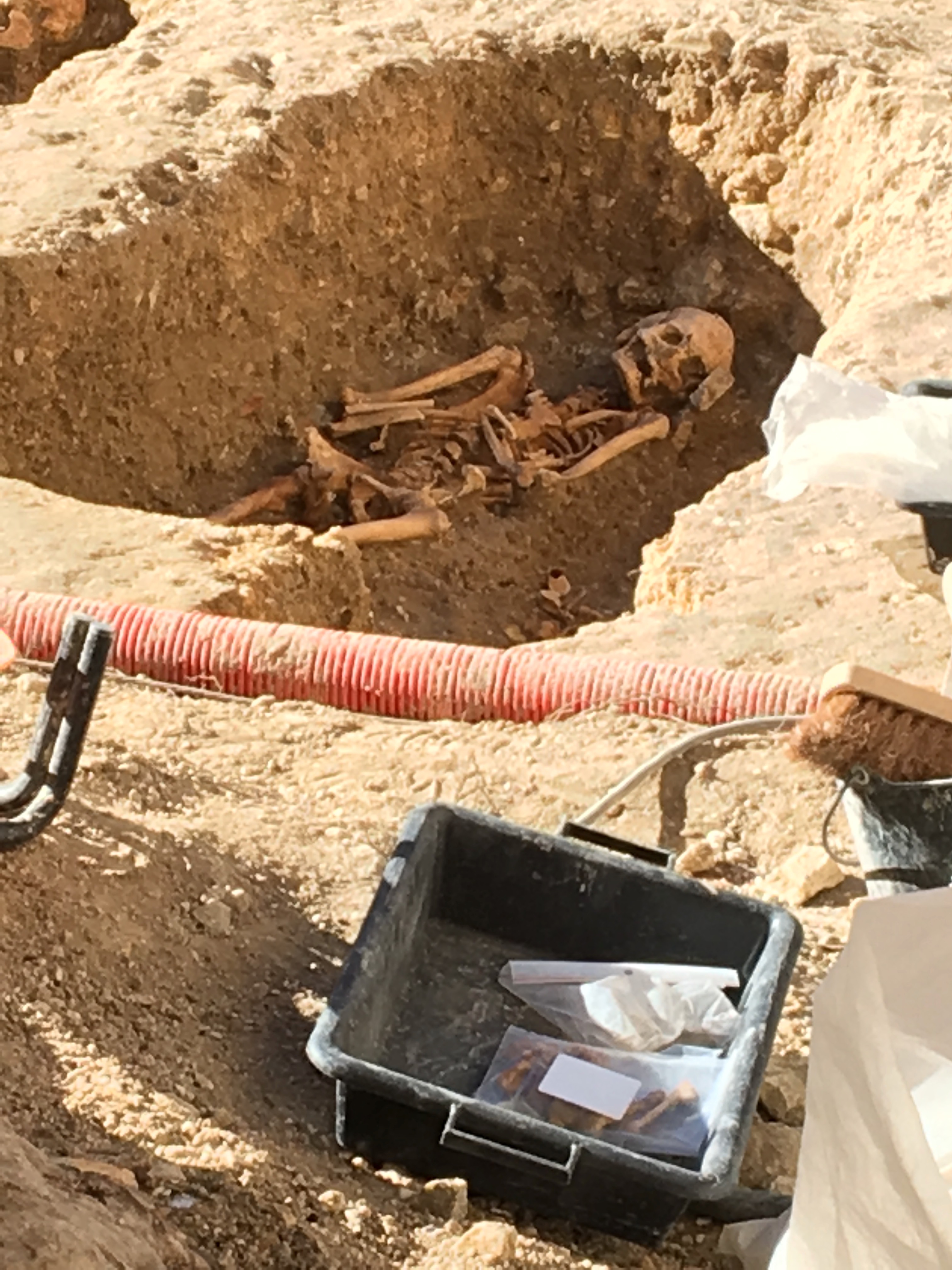 The asphalt area around the eagle-topped obelisk fountain is cleared of cars three days a week to make room for nearby farmers, fishermen, and craftsmen to set up their market stalls. 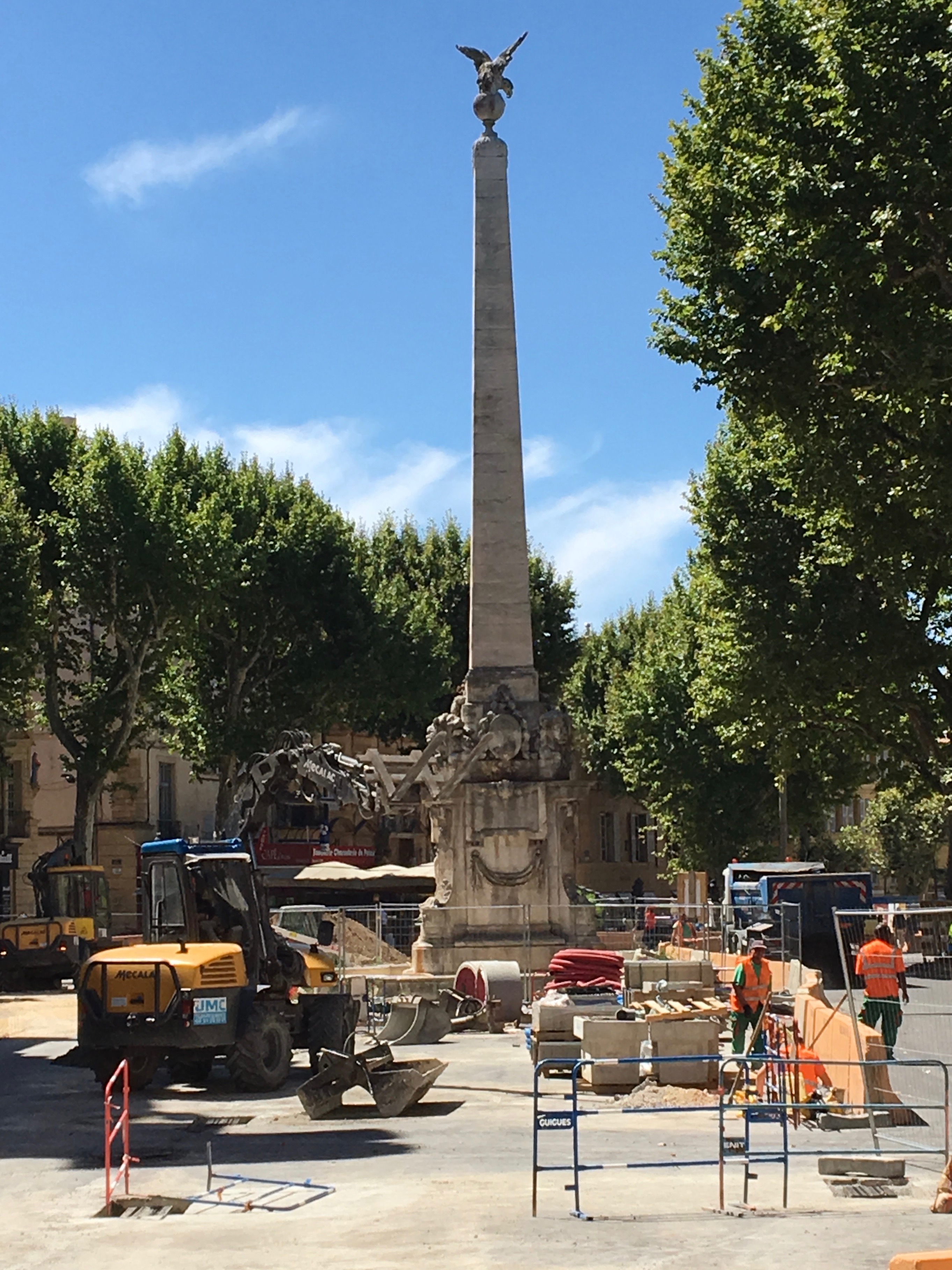 It’s a typical lively sunny scene with olive oil, spice, egg, lavender sachet, and homemade pasta sellers’ voices calling out their daily specials, competing for the city folks’ euros. And our feet pound that pavement every Tuesday, Thursday, and Saturday with menus in mind, planning our meals around what looks good and fresh. 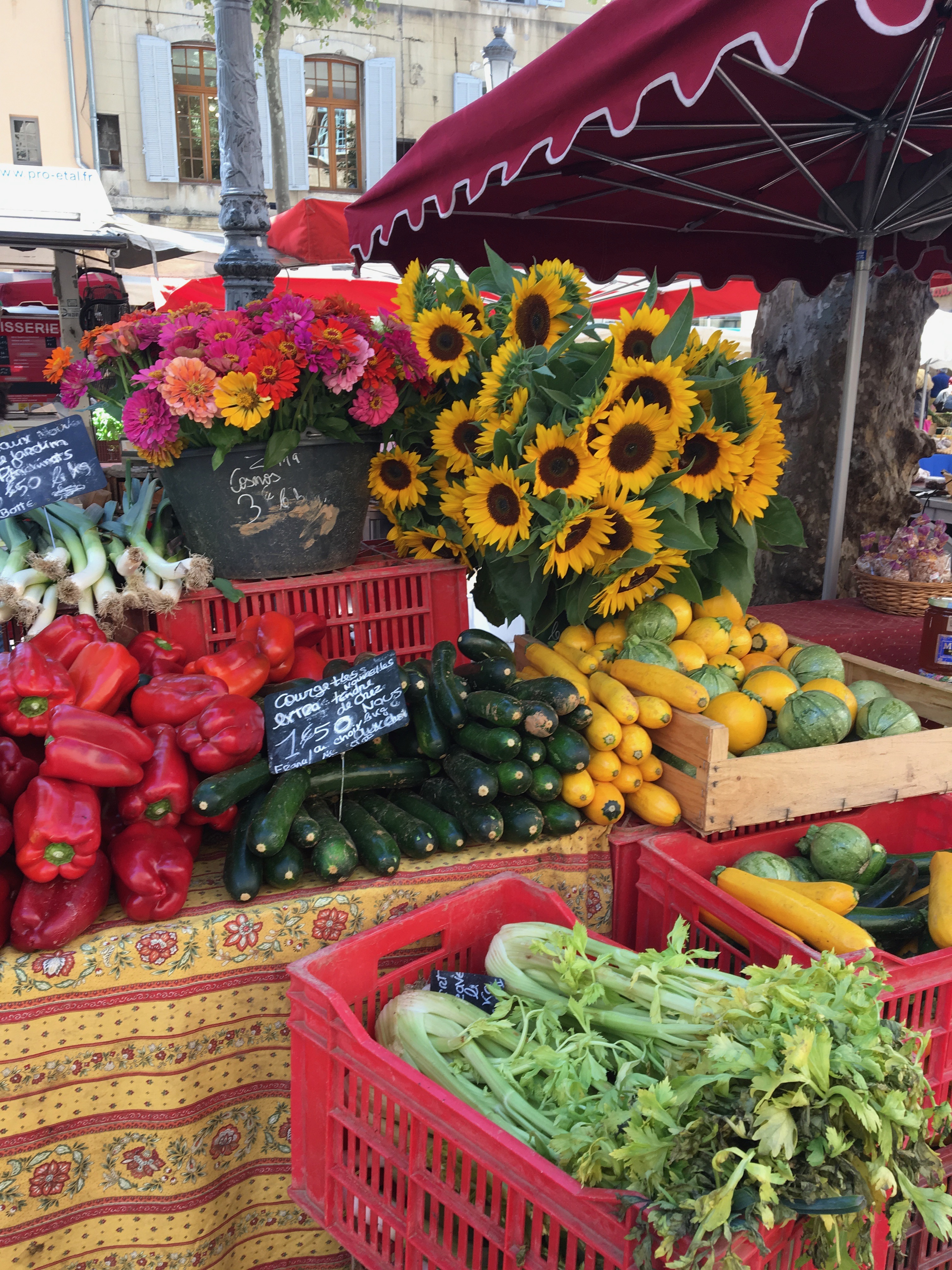 Late in 2016 we began to hear talk of temporarily moving the entire market to another part of town. City Hall has big plans to upgrade the asphalt surface of the Place of the Preachers with stone pavers, making it a car free zone all week. The market stalls will return after the year-long project but the cars on the off-market days will have to find somewhere else to park after the pedestrianization project is completed. Nobody was happy. It would be terribly disruptive for the vendors to move the whole market to another square, and the automobile drivers didn’t like the idea of the long walk to the center from parking lots on the outskirts of town. And when they heard a new drainage system would have to be installed to more effectively capture and redirect the runoff, there were groans, knowing that digging of that level was bound to turn up something medieval or Roman and the year-long project could easily take two years – or more to complete.
And that’s exactly what happened. 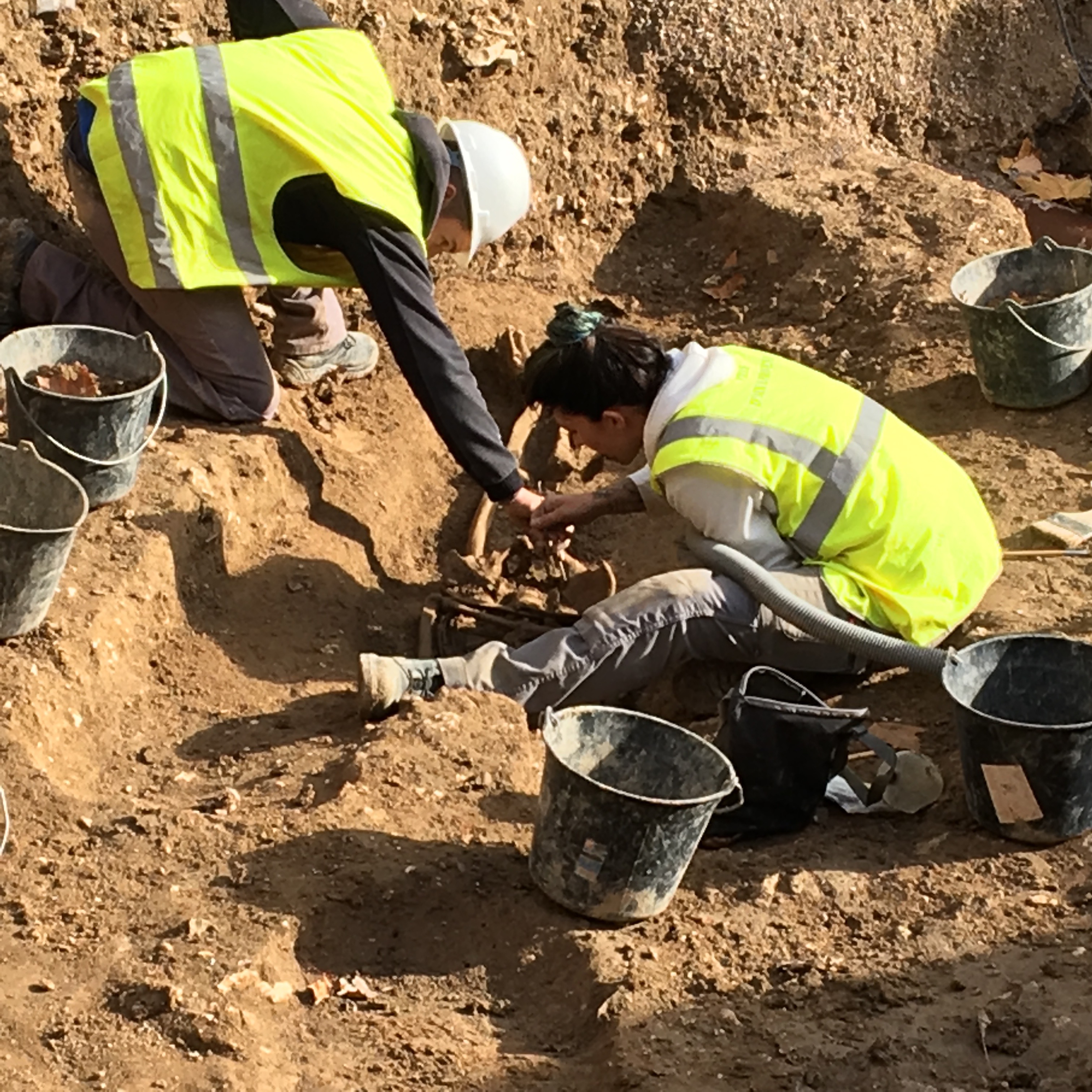 Shortly after they began digging the deep trenches for the four-foot wide underground drainage culverts, work had to stop and the whole area was teeming with fluorescent green vested archeologists instead of construction workers. 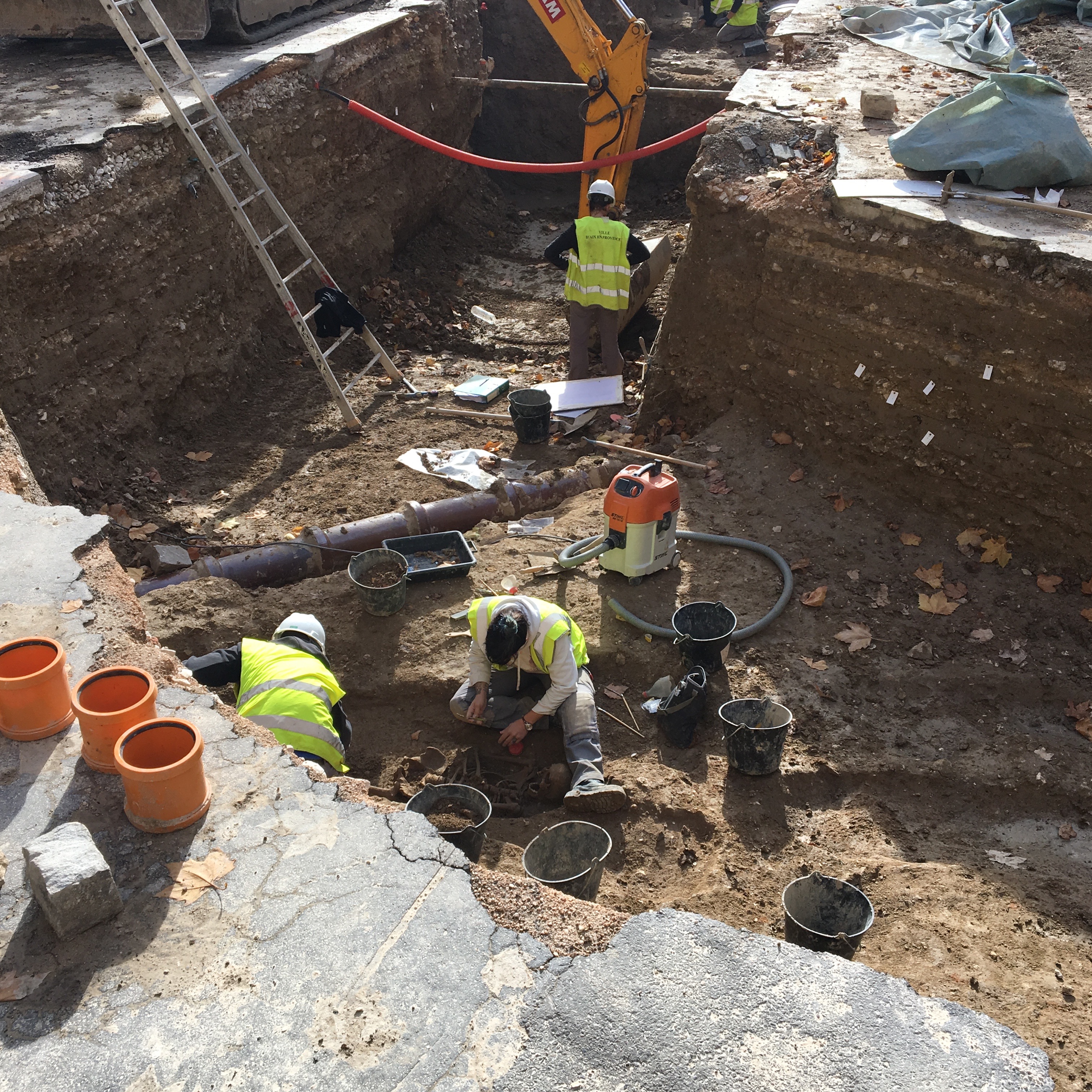 There appear to be about ten deep graves in front of the church facing the square. All the medieval and renaissance maps of the area show at least one gallows located near the center of the square. So maybe these people were executed and there was no one to claim their bodies, so they were buried near where they were executed. A definitive reason for the bodies being buried there was not reported. 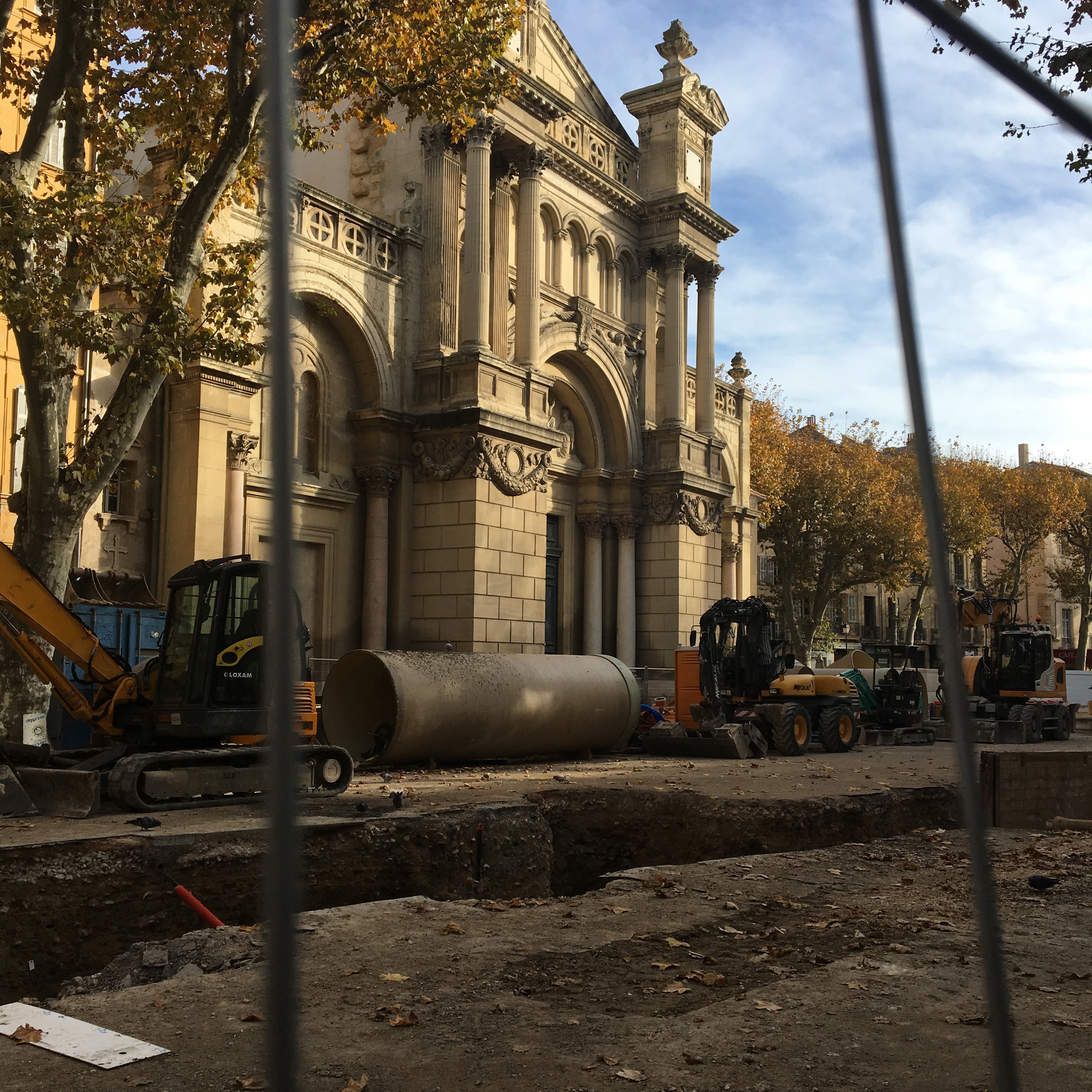 We were impressed with how they were not only searching for artifacts that could lead to a better understanding of the history of the place, but also the care and respect with which the bones were removed for a proper re-burial in the cemetery. The dirt was removed from the skeletons with small paint brushes, then swept into dustpans or vacuumed away to uncover the skeletons as they were buried up to 400 years earlier. 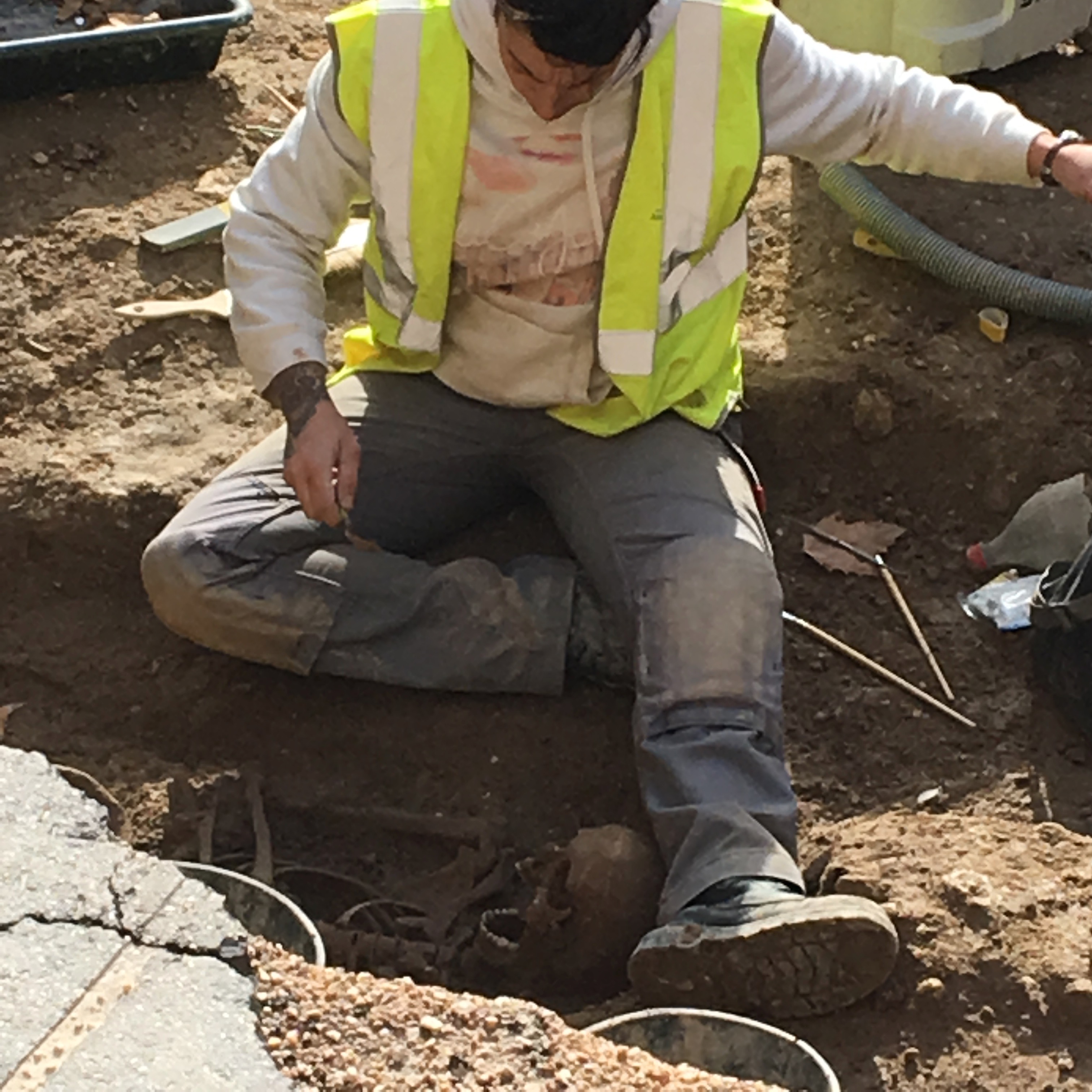 Each bone was carefully labeled before being moved. 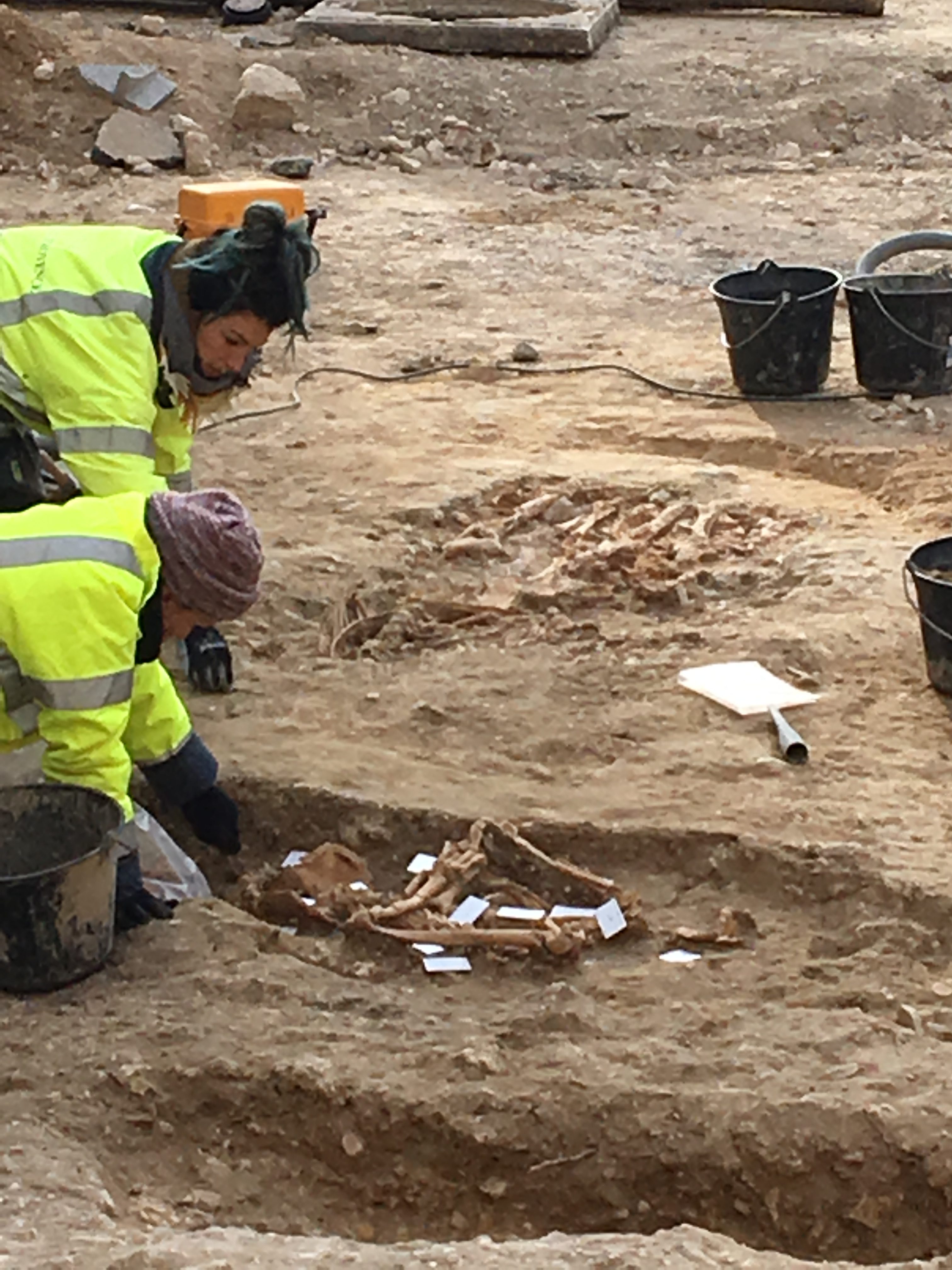 Of course, after the human remains were found, the whole area had to be meticulously excavated to make sure no skeletons would remain under the new pavers. And the other end of the square had to be dug up. Though no bodies were discovered there, the archeologists found and carefully recorded the traces of foundations of several buildings. 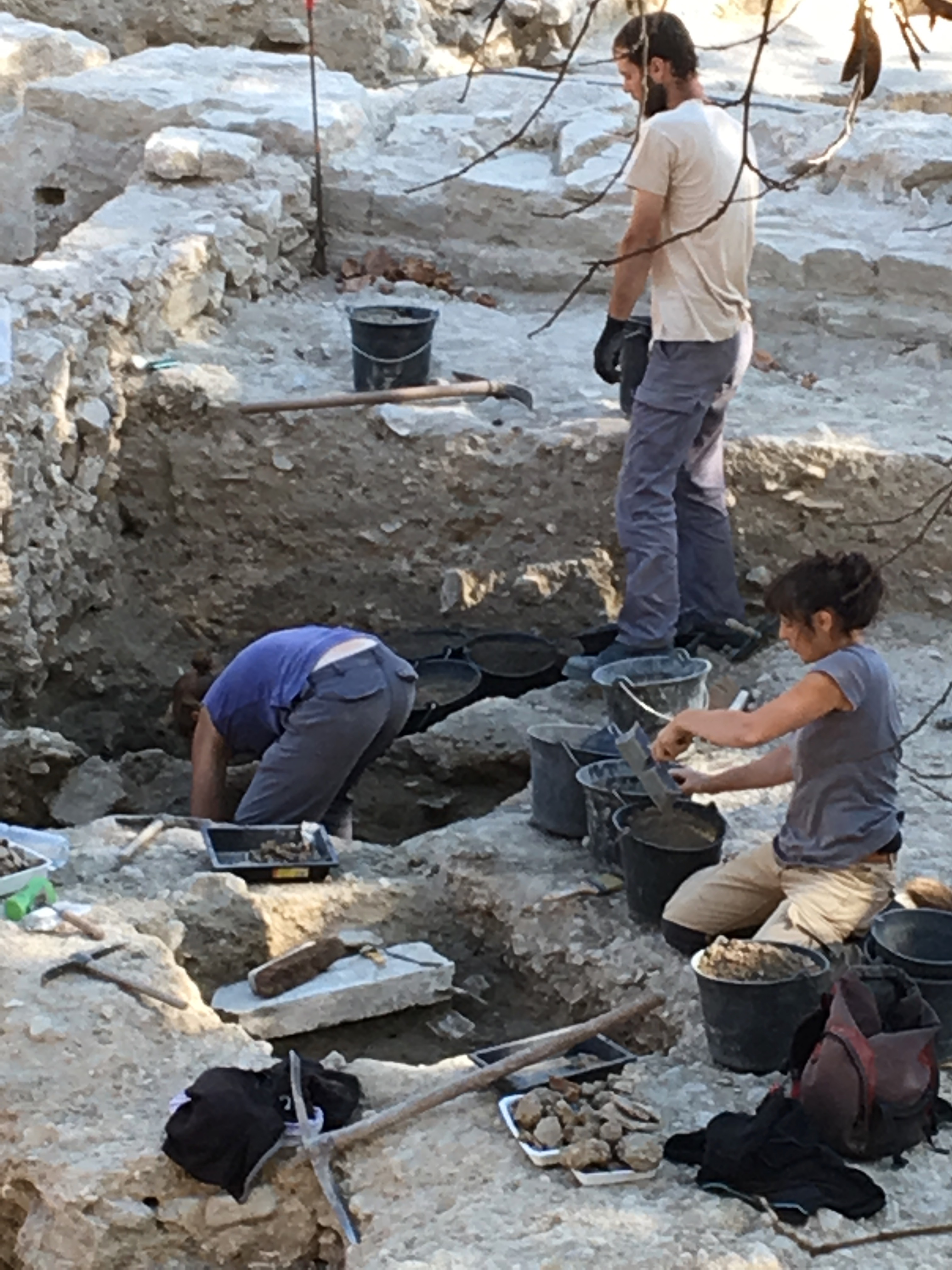 They even attempted to preserve a Plane tree that was growing in the square by wrapping the horizontal roots that had spread across the floor of the ancient buildings.
It is a little creepy to think we – and thousands of others – were unaware all this time that we were walking over buried humans while we shopped and greeted neighbors. But I guess, when you walk around in a town established by the Romans, you just never know.
On the lighter side, in 1676, Thomas Fornet wanted his contribution to the foundations found about 5 feet below the surface remembered by posterity. 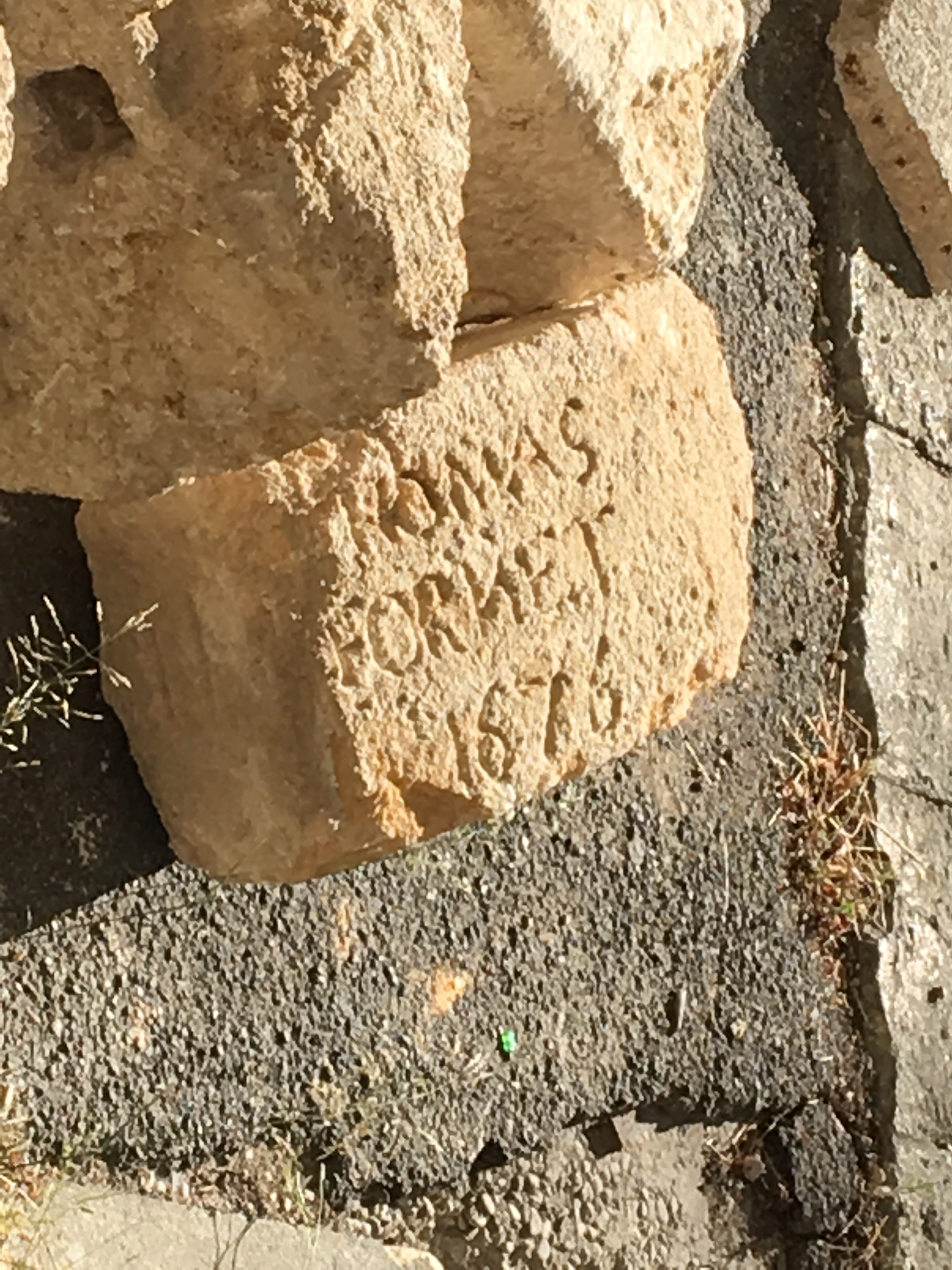 So we will do just that.