Paris Glitters for the Holidays 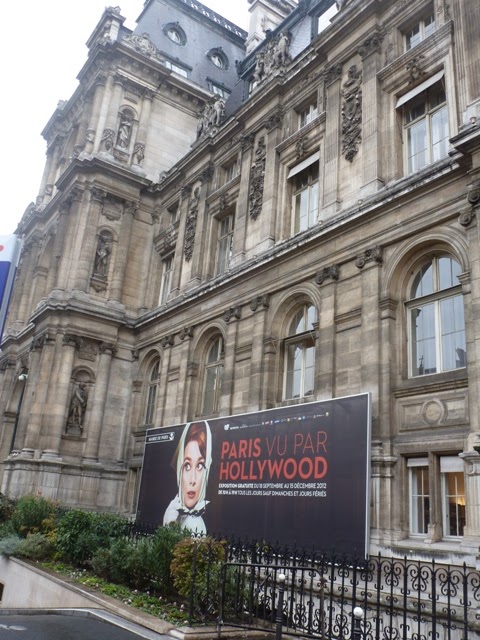 Paris, France
Wednesday, November 21, 2012
Interested in a Music and Markets Tour? We’d love to hear from you!  Why not join us in Italy for New Year’s Jazz? 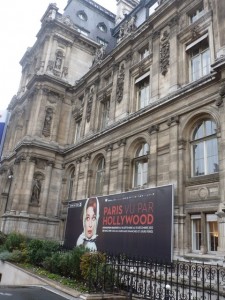 Our Christmas gift to each other continues with lunch and views of the Christmas windows of the Grands Magasins (Department Stores) with our friends, but before that we fit in a visit to the latest exhibit at the Hôtel de Ville (Paris’ grand town hall), Paris Vu par Hollywood (Paris Seen by Hollywood). We’d been warned of the long lines (the exhibit has received great reviews from the critics, so has become a “hot ticket”), so arrive just after opening time, 10 am, and wait under our umbrella in the drizzle for a few minutes before getting in. 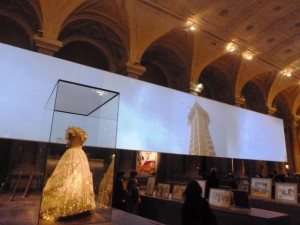 From the silent era (Mary Pickford et al) to the latest hit, Woody Allen’s Midnight in Paris, the vast hall is filled with memorabilia, including rare movie storyboards, letters from and to directors, and original sketches and costumes, such as this gold spangled white gown from Jean Renoir’s French CanCan.
Several screens, including the large one, filled with classic Audrey Hepburn clips, feature Hollywood’s best images of the city. One quote says that the Paramount sets of Paris in the 40’s and 50’s were even better than the real thing – ha! The exhibition’s on until 15 December and makes a great way to while away a drizzly hour or so in between strolling real live Paris. 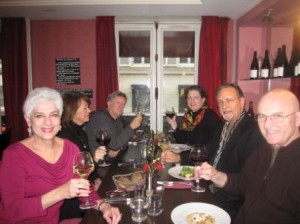 Back to the hotel, where Anne, Jack, Sandy and Ed await us, then around the corner for lunch at Aux Chai Moi (a play on words – Chez Moi means “my place”, and sounds the same as Chai moi, which means “my wine cellar”).
Sandy and I had both been searching and asking in- the- know friends for a restaurant near the Grands Magasins, and everyone agreed that there’s nothing nearby but touristy places. The pleasant lady at our hotel’s front desk said so too, and suggested the “petite bon resto” just around the corner. It is indeed a little gem – we’re seated on the top floor (there are a few tables on several floors) 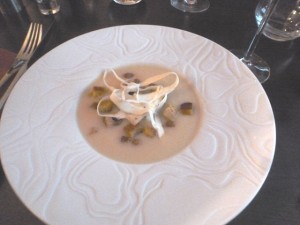 and order from the suggestions for today, seasonal treats such  as a creamy parsnip soup speckled with crispy lardons (bacon cubes),
roasted guinea fowl, and sea bass on a bed of buttery mashed potatoes – all accompanied with wines from the Chai.
Descriptions of this year’s delightful windows, and Sandy’s inviting emails  – come up to Paris for a day! – were what prompted this Christmas gift idea. 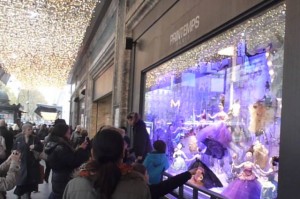 Under a canopy of lights stretching down Boulevard Hauss- mann, the scenes enthrall… 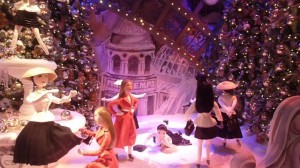 skaters revel, dressed to the nines in exquisitely tailored miniatures of outfits available inside the store – a discreet price list and directions to which floor carries the item is at the bottom of each window. 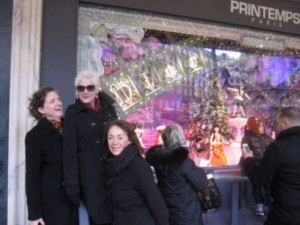 We three ladies stop snapping photos and video for a minute to pose together – can the children be enjoying this any more than we are?!

And the show goes on –
the elegant marionettes dancing, 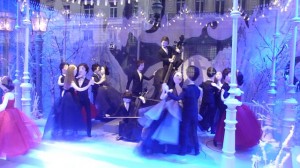 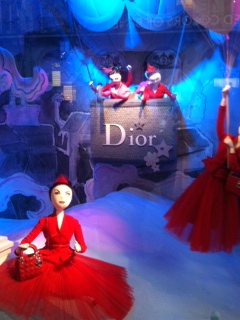 riding a carousel, floating in a balloon.
The workmanship, both of the gorgeous clothing and accessories (those miniature purses – love ’em!)  and the scenery, is fabulous. 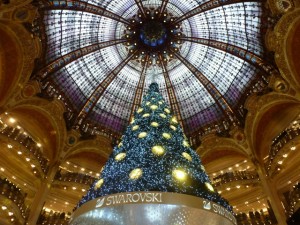 On to Gallerie Lafayette, where the windows (Louis Vuitton) are not at all as interesting as the Dior at Printemps, but the Christmas tree inside, under the stained glass dome, can’t be missed! Swarovski this year, it’s surrounded by tourists and locals snapping a photo. 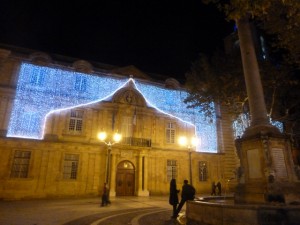 Well, we have to return to Aix… with plans to meet again in Virginia (we’ve persuaded Anne & Jack to stay a few days before returning to Atlanta) for an evening of music. The train home is non stop, so in just a little over three hours we’re walking to our apartment. The holiday lights have been turned on in Aix too – the Hôtel de Ville is draped in a curtain of lights.
Joyeuses Fêtes!