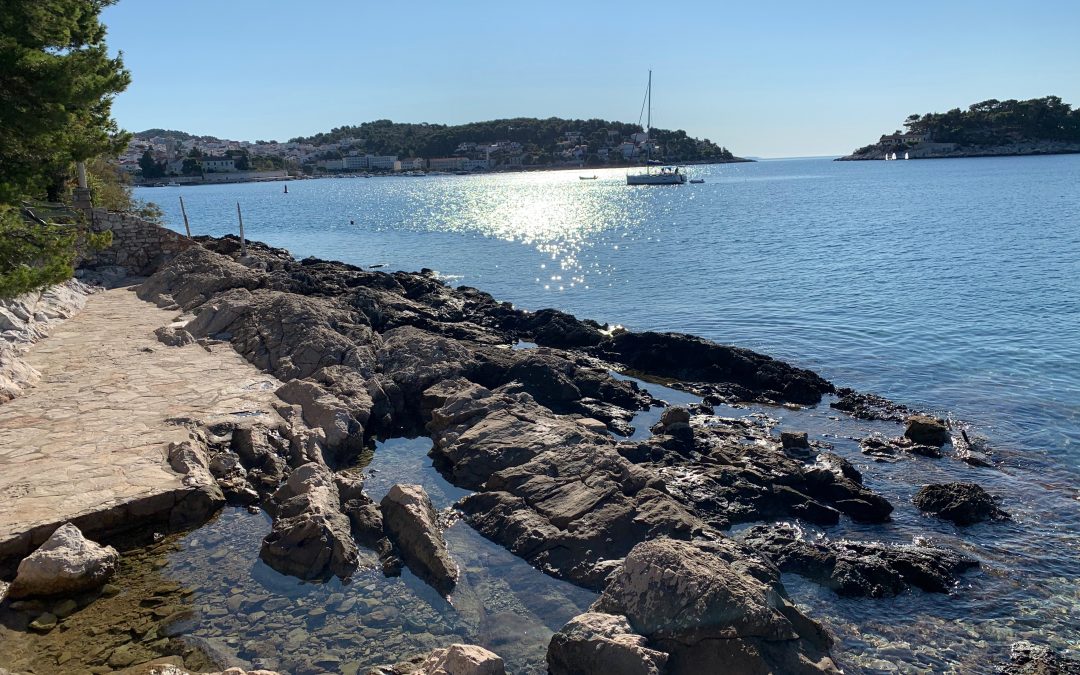 It’s mid-afternoon on our first day in Croatia and we just checked in to our rental apartment in Split. Job one is to make plans for dinner: Anne will shop in the grocery store downstairs for basic supplies and something we can make for dinner. I’ll choose a couple bottles of red wine. I agreed to this plan knowing that I knew next to nothing about Croatian wines. What I did know was that I had some quick catch up homework to do.

I also quickly realized Croatia labels are not in English. When I see a bottle of Argentine wine labeled “Malbec,” I know what to expect. But what does a Croatian wine labelled “Bogdanuša” or “Grk” tell me about the likelihood of whether the wine inside the bottle will go well with dinner tonight?
I would soon be staring at shelves of bottles whose labels were covered with mysterious foreign words. And I needed to come up with an intelligent red

wine choice before dinner. So I grabbed our two Croatia guidebooks and found the pages about the wines of the nearby area. 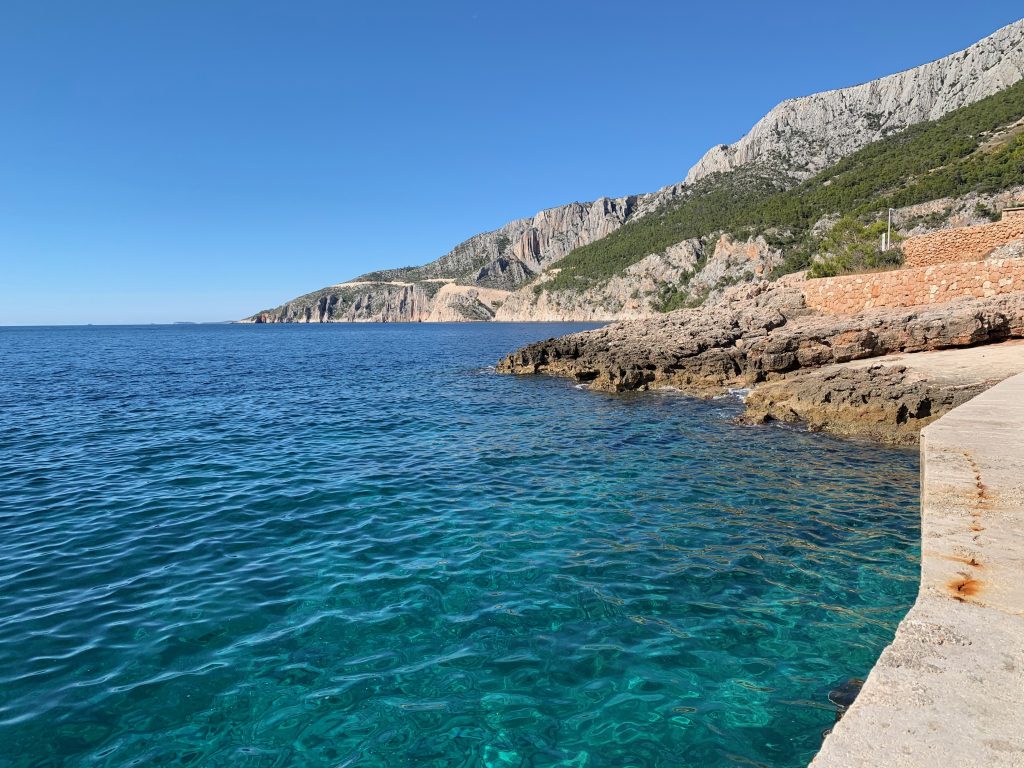 Hooked on the Hyper Local

Grapes that were grown and made into wine very close to where we’re eating is the goal. We learned long ago that wherever we are, we eat better when we order local food specialties in restaurants or try our hand at local recipes in the kitchen. Waiters are happy to bring us a bottle of something very local that goes well with what we ordered. The locals have been producing both the food and the wine from the same soil for centuries . Of course they go deliciously together.

So with google and the guidebooks, I focussed on the wines produced right here on the southern end of Croatia’s west coast and on those islands I could see from our eighth floor balcony.
It’s hard to grow grapes in Croatia. Land for expansive Bordeaux-like vineyards just doesn’t exist. The abundant mountains force winemakers to the scarce valleys or the narrow ribbon of limestone where the sea and the rocky mountains start. Winemakers who choose to farm near the shore have miles of shoreline to choose from. Croatia is the size of South Carolina, but including all the islands, has more shoreline than California. 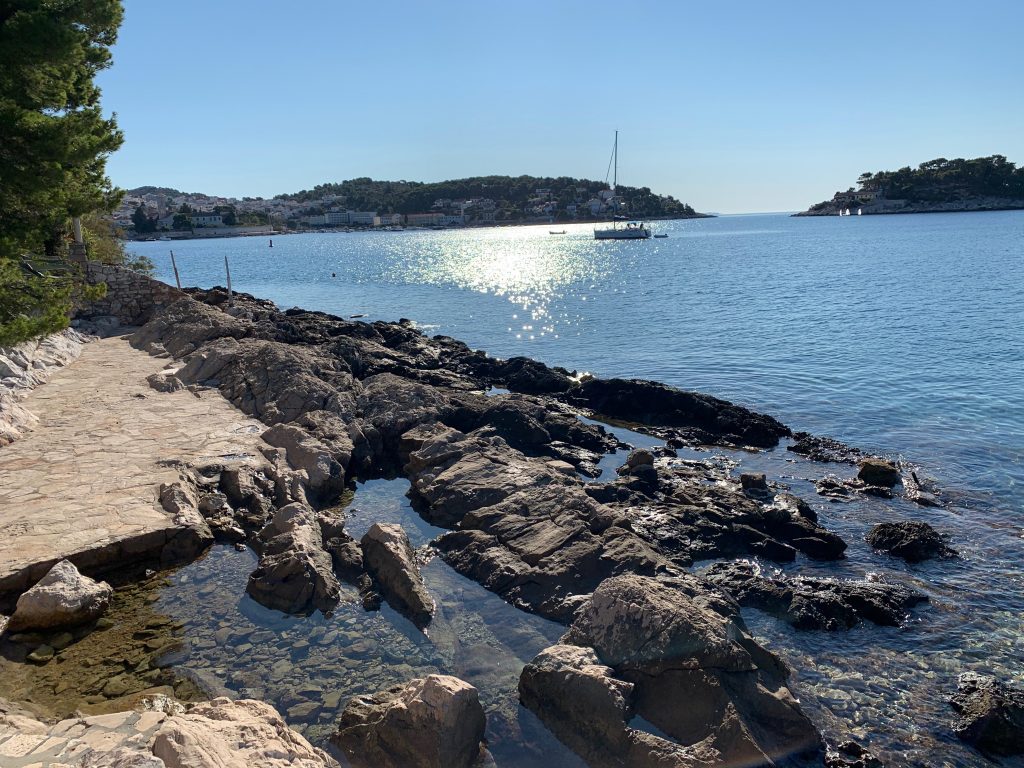 The Southern Dalmatian Coast is great for sailing, but the landscape doesn’t make planting grapes easy.

Next I learned that Croatia has their own wine naming protection system similar to France and Italy’s AOC and DOC with the acronyms ZOI or KZP, but this system does little more than divide the country into 12 wine-growing geographical areas. The ZOI, instead of being an indicator of a wine’s quality, points primarily to the area where the grapes originated. I did, however discover that for dinner tonight, I wanted a wine from the ZOI named, “Srednja I Južna Dalmacija” (Central and Southern Dalmatia) rather than from one of the other eleven. So I’ll look for that designation on the label next to the words “Zaštićena Oznaka Izvornosti” or “Kontrolirano Zemljopisno Podrijetlo”

Next, the dominant red wine grape grown in nearby vineyards and islands is Plavac Mali, a descendent of the indigenous zinfandel. While Anne was shopping for dinner, I scoured the unreadable names on wine labels for a wine made in the Central and Southern Dalmatia ZOI from this grape. I found a bottle that featured the word, “Plavac”. It was 37 Croatian Kuna or $5.77 and it met my two criteria, so we carried it home. 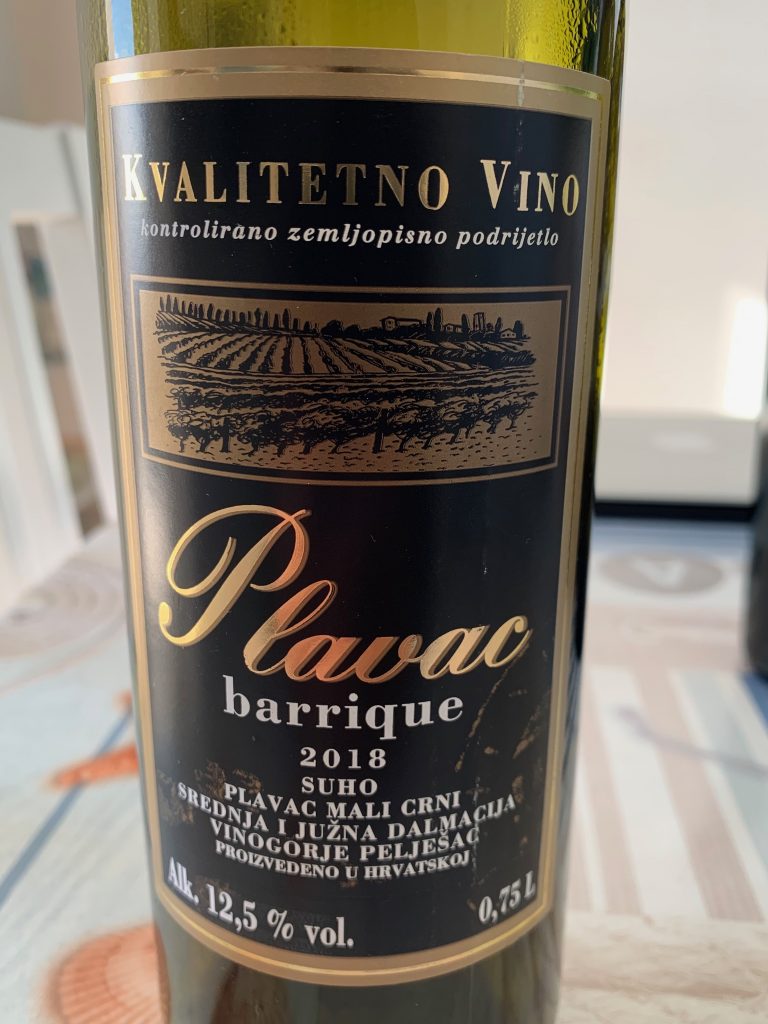 This label is in serious need of a decoder ring.

When Anne saw me make a face at the first taste, she lost hope that this would be the perfect complement to our first Croatian dinner. As much as I wanted to like it, the most picturesque description I could come up with for it was that something was missing. The color was weak, the hot alcohol hit was abrupt, and there was a sourness in the slight taste of red berries.

Going Back for More

It’s not the grape’s fault, I take some of the blame for going with the first bottle I saw with familiar words on it and I paid too little for it. So before tomorrow’s dinner, I determined to do a bit more research on Southern Dalmatian wines and loosen up the wallet a bit and see if I get a more agreeable taste.

I armed myself with more research and written notes: 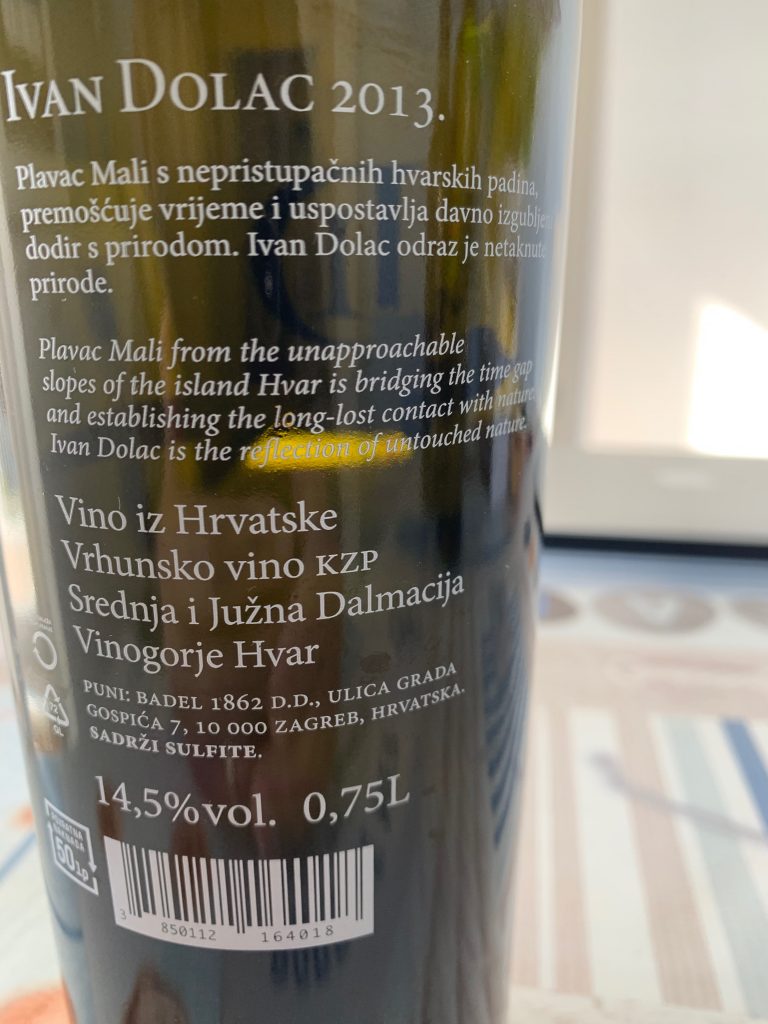 Some labels like this (empty) bottle of Plavac Mali have very helpful English translations.

Some Improvement on the Second Swing

So on the second trip to our grocery store’s wine section I selected a Postup and a Dingač both made from plavac mali grapes.

Each were about $15, classified with the Vrhunsko quality rating, and compared to what I’m accustomed to, I’d rate both of them at about a B-.

Both are bold reds; the Dingač seemed bitter and the Postup more chalky. I wouldn’t say either was pleasant. But with a steak or hearty winter stew, either would make a fine evening’s companion. 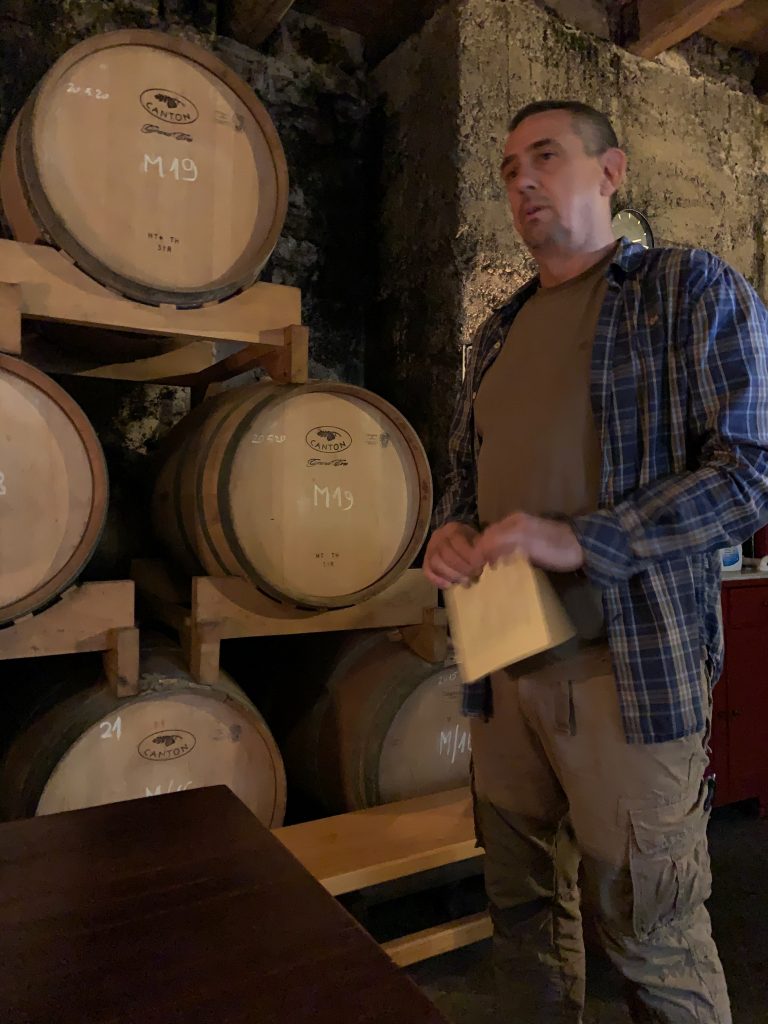 This winemaker, who is also a great spinner of wine stories, makes it easy to spend an afternoon tasting and buying in his cellar.

But there’s more to wine than the flavor. I like that after only about 20 years of a market economy, Croatia’s new generation of winemakers, though they are staying with the ancient indigenous grapes, are beginning to win international competitions, and the quality and finesse of their wines are getting better. And the fanciful stories I heard from some of the winemakers reflect the authenticity of the craft. I could sit and sip a wine all day as long as the winemaker is telling the ancestral legends that go along with it.This winemaker, who is also a great spinner of wine stories, makes it easy to spend an afternoon tasting and buying in his cellar.

Fairies Arrive Dancing During the Night

One legend involves a tiny pond surrounded on all sides by hills just north of the village of Smokvica on the cigar shaped island of Korcula. Unlike the other ponds in the area, this one never dries out in the heat of the summer because of the dancing night fairies protecting the pond. According to the legend of the Vilin Dol (Valley of the Fairies) one morning, a villager named Jakov and his mule found a beautiful fairy who had fallen asleep after an exhausting night of dancing. Knowing that fairies cannot survive in sunlight, Jakov cut some branches and made a little shelter to shade her sensitive skin. To reward him for saving her, she gave him two bags of gold coins instructing him to open the bags only when he arrived back home in Smokvica.

On the way there, overcome with his desire to see the coins, he opened the bags and found only dried leaves. At home, when he related the story to his wife, she shook the now empty bags of leaves and a few gold coins fell out. She gave him a thorough tongue lashing for letting his curiosity get the best of him. 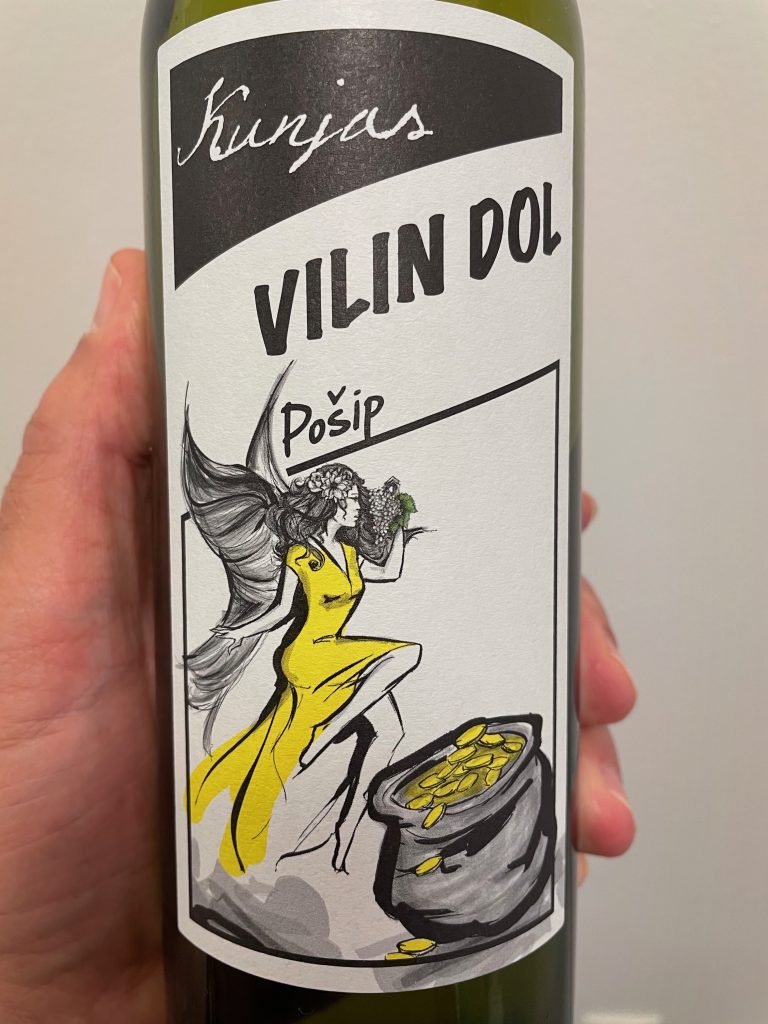 Cousins of our apartment host, Boris, grew the grapes and made this wine on the nearby island of Korčula.

A Passion for Passing on the Traditions

Stories like these repeated by winemakers and re-enacted by the real girls of Smokvica for centuries are part of a culture bent on refining the wine produced from the same varieties of grapes and soil and that their grandfathers worked. These coastal Croatian winemakers have no interest in reproducing what moderns have come to expect from Italian, French or New World wine. Their strong and enduring passion is to honor the ancestral traditions handed down to them by drawing all the best from the grapes that thrive on the scarce workable soil by the sea,. 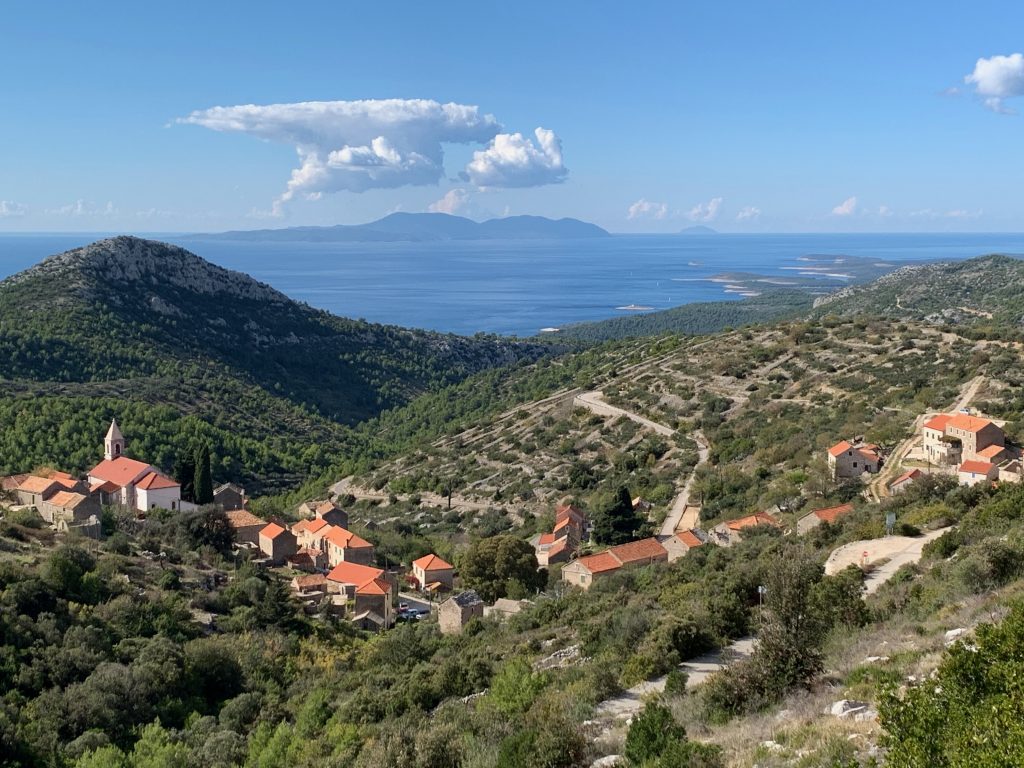 On these hillside terraces, villagers have been producing admirable wines for centuries.

Southern Dalmatian coast winemakers like to explain that their grapes get kissed three times by the sun – directly by the sunlight overhead, by the light bouncing off the near-white limestone vineyard floors, and by the sparkling diamond-like reflections from the adjacent Adriatic Sea. And I’m happy to continue enjoying the smells and tastes of this unique and ancient land, expanding my experience with the foods and wines and listening to more winemakers’ stories.