From Elegant Aix to Village Vias 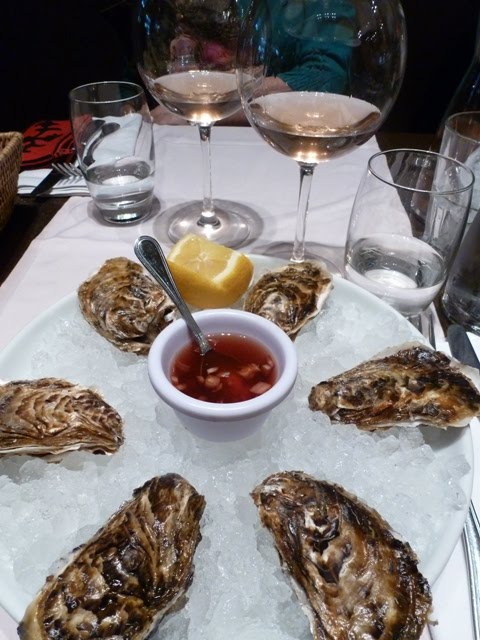 Sunday is a quiet day in Aix, not many people on the streets, nearly all the shops and many restaurants closed. Cafe Mado, a popular spot on Place de Prêcheurs which we’ve not tri 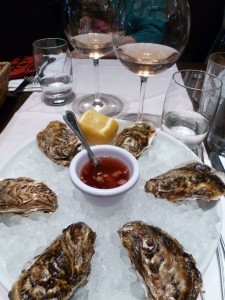 ed before, is busy as usual. Too chilly to be outside so we’re seated indoors, and watch as one seafood plateau after another arrives at nearby tables.
Kirk begins with a serving of briny oysters from the Bassin de Thau, which we’ll drive by on our way 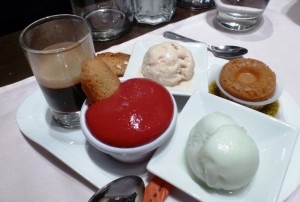 And we finish with a shared Café Gourmand, enjoying bites of several sweets with the strong coffee. That colorful raspberry foam is light as air and intensely flavorful. 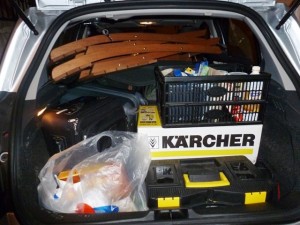 Yesterday we shopped for things we’ll need in Vias, and the little rented Renault is jam packed. It all fit – even the Karcher pressure-washer and two woo 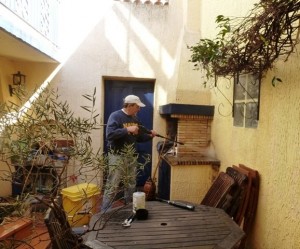 den chairs for the courtyard!

Monday morning, and Kirk’s out in the courtyard of La Belle Cour, power-washing that terra cotta and creamy yellow walls cleaner than they’ve ever been! 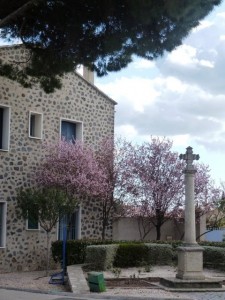 I’m off to do errands, enjoying the village views – a lava stone-studded house by the market cross nicely sets off the springtime blooms. 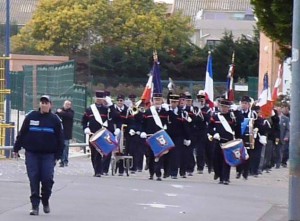 What’s that drumming I hear? A marching band is on its way to the church, and a poster tells me that today’s commemoration is the 50th anniversary of the Algerian War Cease- Fire. 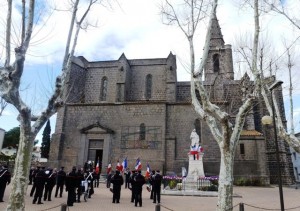 St. John the Baptist church, also constructed from the black lava stone of the nearby Agde volcanoes – in the 12th century – is just around the corner from us. 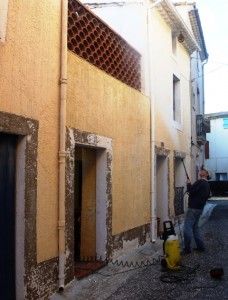 Kirk has moved on to the façade and what has been looking the most shabby – the white “framing” around the windows and doors. He has patched several peeling spots through the years, but now the white borders are due for a total rehaul. 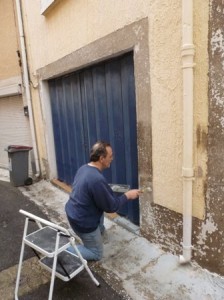 Then it’s time to patch the pitted cement surrounds, and clean off the lane which looks as if there’s been a heavy snowstorm – that pressure wash sent white paint chips flying!
Tuesday was set aside for painting, but the exterior will have to wait til our next trip, since we woke up to rain, which continued throughout the day. That means that we’ll get alot of the interior work got done instead, and we have our list of honey-do’s for May, when we ‘ll spend a few working days here before ou 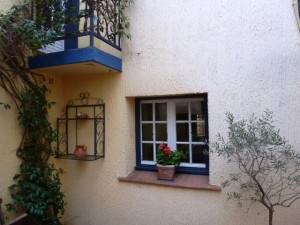 It’s warm enough (unlike when we were here in frigid February) to plant some bright geraniums, they’ll be a cheery welcome home when we next enter the courtyard.