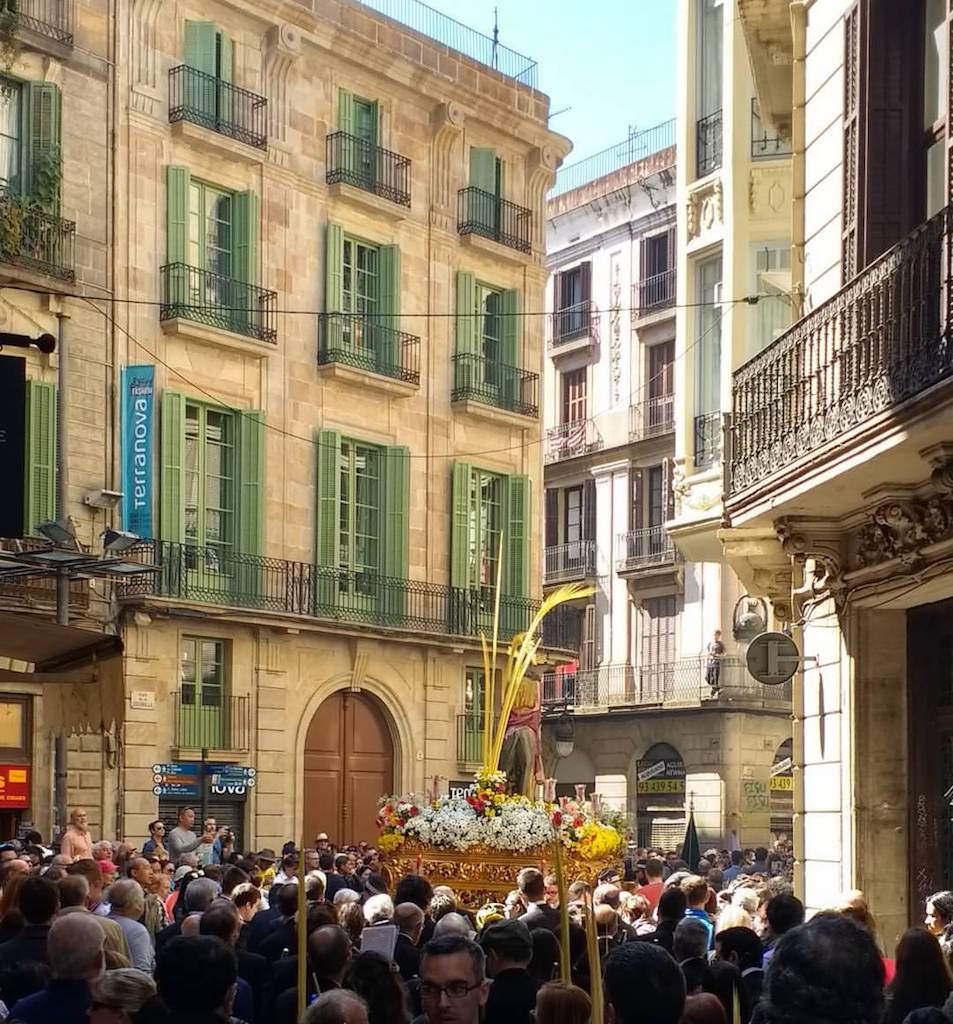 A cozy corner in Poble Sec, the neighborhood near Montjuic where we’re staying, is the perfect place for our last Barcelona  breakfast – I’m inspired to serve our yogurt and fruit at home in such an elegant goblet! 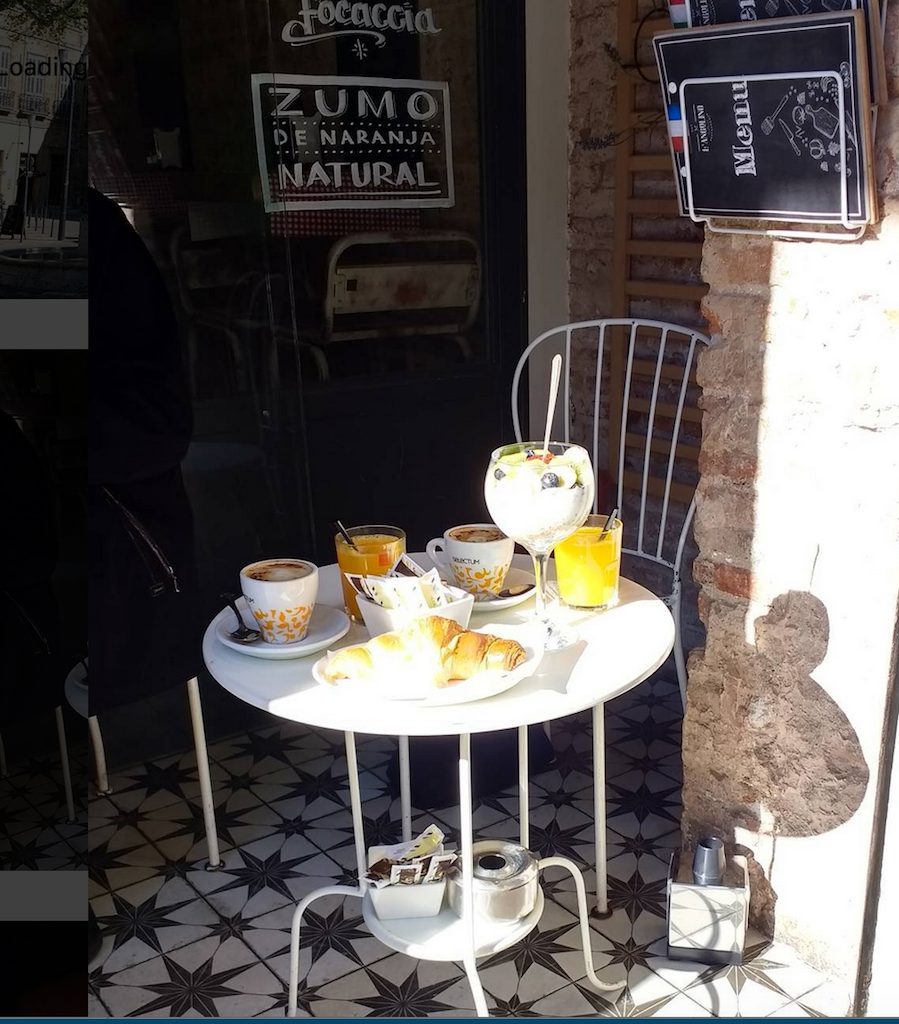 We’ll fly back to France later today, and our final hours are spent in the Barri Gotic, the old quarter. Petritxol is one of my favorite strolling lanes – with several recommended chocolate shops, churrerias, and boutiques – love the over-door decor of this bookshop! 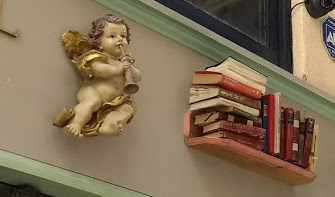 And a highlight of the street is the ceramic tile vintage cartoons  – such as this one exclaiming that from dawn to dusk all the people walk by. 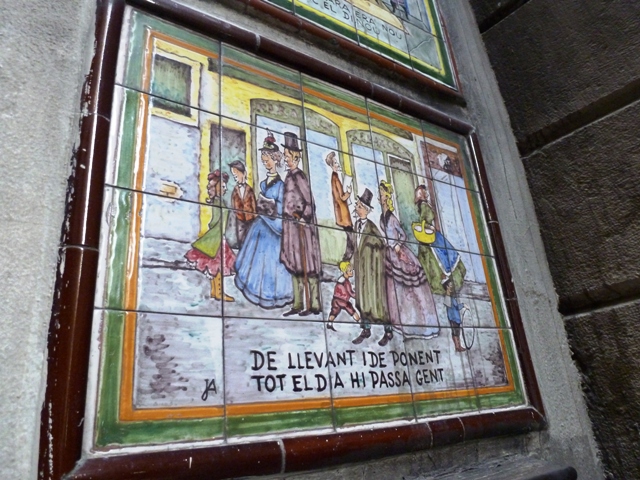 As we’re walking to the cathedral to see the post-mass dancing of the Sardana, we’re sidetracked by the thump of drums, and find a Palm Sunday procession winding through the narrow streets.

We quietly walk alongside the solemn marchers, and catch up to the heavy float being carried through the streets by a hefty group of men. 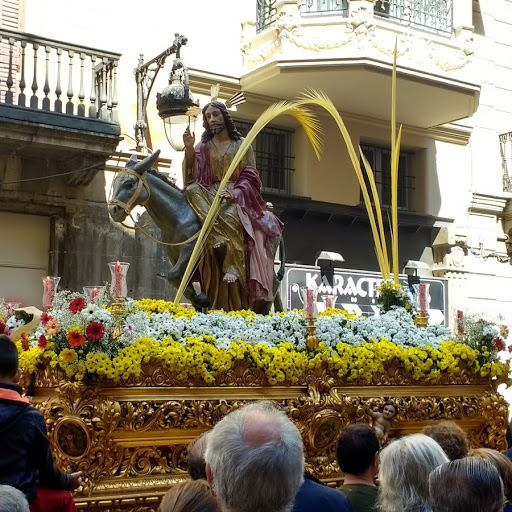 Semana Santa celebrations are so beautiful in Spain – we’re glad that our travel schedule has us here on Palm Sunday!
The Sardana, a traditional Catalan folk dance, takes place every Saturday evening and Sunday morning in front of the cathedral. The band is ready on the steps, 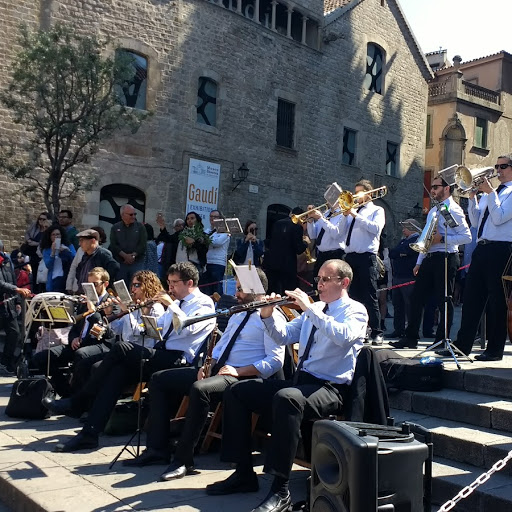 and the dancers join hands and begin to circle to the music, 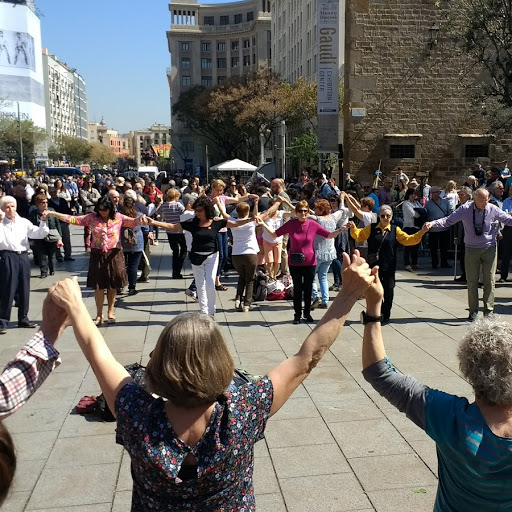 the steps as familiar to them as their names.
Barcelona, what a pleasure! We’ll be back in a few weeks, bringing new guests eager to experience your delights! Interested in a Music and Markets Tour? We’d love to hear from you!
Next on the itinerary: New Year’s Jazz in Italy 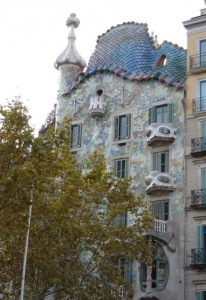 I’ve heard and read about Barcelona’s Sardana, a circle dance, for decades, and today we finally have the opportunity to see it!
It’s about a twenty minute walk from our apartment in the Eixample (expansion) District, the area that was designed and developed in the mid-1800’s when Barcelona burst through its medieval walls. Modernista (Catalonian Art Nouveau) architects, the most famous of whom was Gaudi, designed sinuous masterpieces for their wealthy clients, and his shimmering Casa Battló greets us this morning as we walk down Passeig de Gràcia toward the old town. This wondrous building changes color throughout the day and night, depending on how the light hits it. 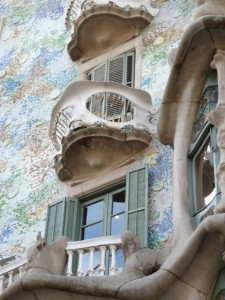 Mask-like balconies dot the scaly façade – sometimes the house looks like a dragon, sometimes like an undersea fantasy. Amazing! 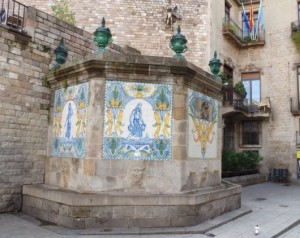 What a difference as we enter the Gothic Quarter, closer to the Mediterranean. Traditional ceramic tiles adorn exteriors and palm shaded courtyards. 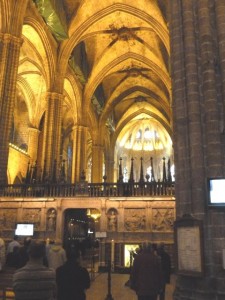 Sunday morning mass fills the Seu, or Cathedral, with alleluias, and incense fuzzes the altar as we peer through the intricately carved marble choir screen. 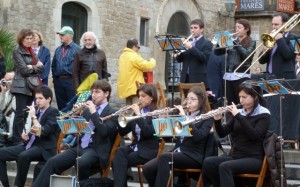 On the Cathedral steps the band is tuning up, with several unusual instruments unique to Catalonia (Barcelona is the capital of Catalonia, which is one of Spain’s regions that clings strongly to its own language and customs).

I am sorry to say that none of my videos of the unusual music and dance came out… I so wanted to share it! There was one large circle, and several smaller ones. As people entered the circles, they would bring their coats and bags into the center, then join the ring and the slow and intricate steps, raising and lowering their hands, sometimes jumping up and down together. I could have watched for 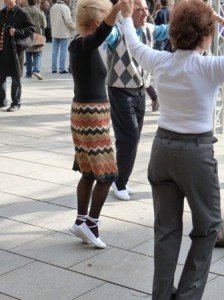 There was no dress code, but several of the ladies changed into ankle-laced espadrilles to dance. 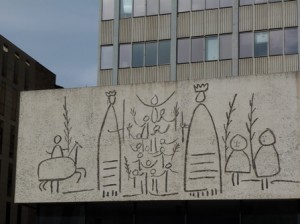 In stark contrast to the ancient buildings (even a portion of a Roman aqueduct) surrounding the Plaça (plaza) is a modern high-rise, the Architects’ Association, decorated with graffiti-style Catalan folk scenes designed by Picasso in the 1950’s. 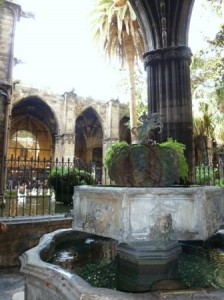 From the celebration in the front of the cathedral, we walk to the peaceful palm-shaded cloister in the rear. 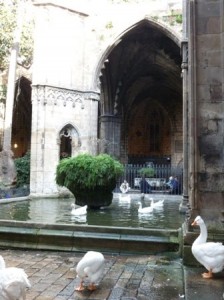 A lovely place, a little noisier than most cloisters, since thirteen geese, representing the thirteen years of Saint Eulàlia, Barcelona’s martyred patron s 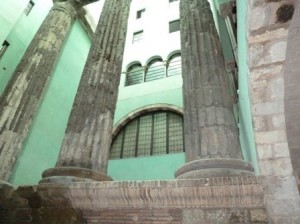 Down the winding narrow lanes behind the cathedral are further traces of the city’s Roman origins – four remaining columns of a first century BC Temple of Augustus. 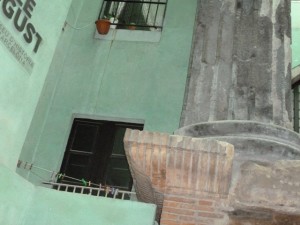 Through the centuries the city’s been built around them – how would you like to hang your laundry out beside an ancient Roman pillar?! 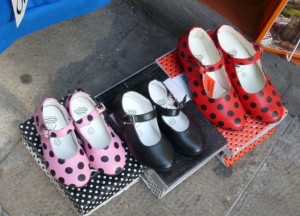 Didn’t see any of these Spanish dancing shoes in the Sardana rings…. 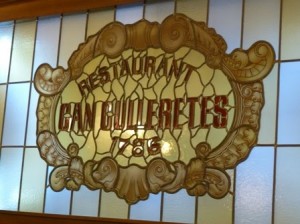 Can Culleretes has been dishing out traditional Catalan cuisine since 1786. 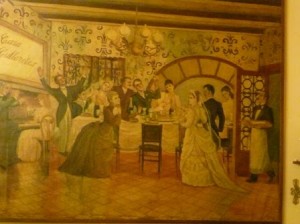 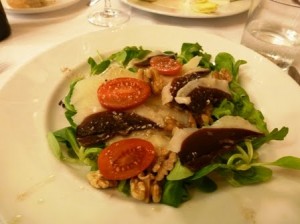 We begin with tasty salads – mine with smoked duck breast – and continue with duck and plums. Usually we choose different dishes to get a better feel for the menu, but we both really wanted that duck!