Some of the most beautiful ceramics in Italy are made in Deruta, northeast of Orvieto, and although the artisans are on holiday until January 7, some of the showrooms are open. Silvia, third generation of the artisan Pimpinelli family, welcomed us warmly to the family’s workshop, filled with outstanding examples of Deruta craftsmanship. 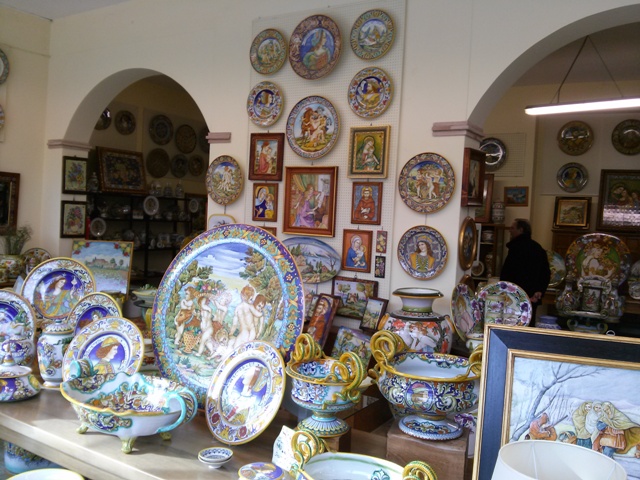 GP Ceramiche Artistiche is one of the most respected workshops in Italy, and features magnificent traditional pieces, as well as newer designs of their own.
Silvia’s tour left us marveling at the hours of delicate and inspired work involved in each piece. 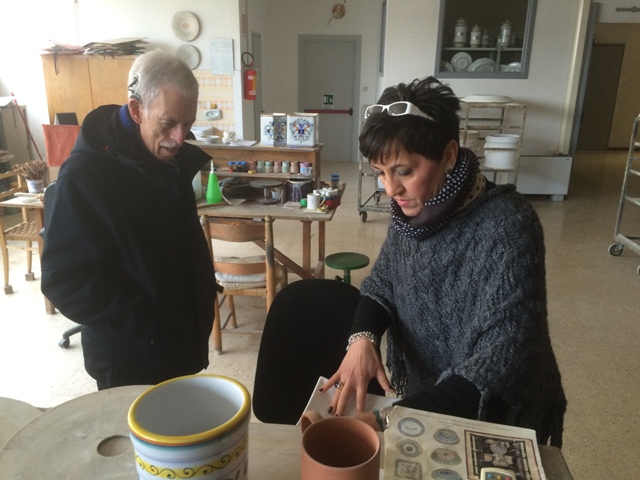 From the clay, arriving from Tuscany since Deruta has long since run out, 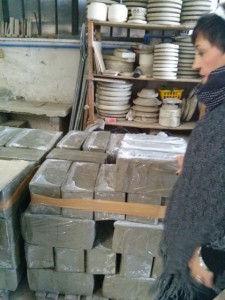 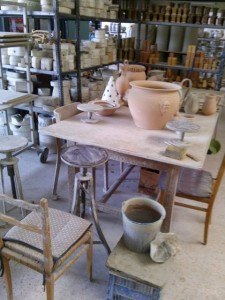 to the design and transfer and painting, we learn what is involved in a piece,  shivering with Silvia in the cold workrooms, fascinated even in the chill. 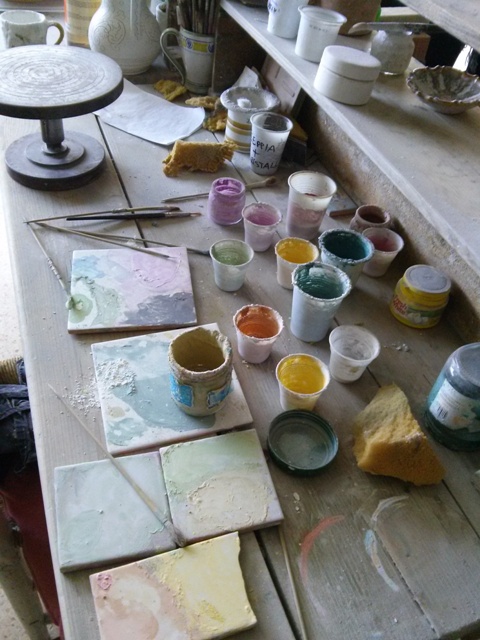 After firing, the colors become so much more deep and intense – that rich Deruta red!

Silvia’s father has hunted for ancient pottery and fragments since he was a child, and a small collection of his finds share the history of Deruta ceramics, renowned since the early 15th century. This ancient plate features a scene from Signorelli’s frescoes in the chapel we viewed yesterday in Orvieto’s duomo. 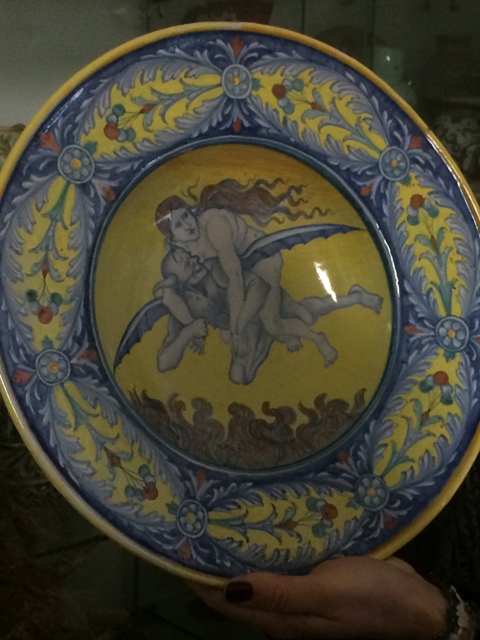 We’ve been glancing out the window as we shopped in the front boutique…an unexpected snowstorm has blown in! So our drive home, as we snake along the two lane road beside Lake Corbara, is quite an adventure as the snow thickens. 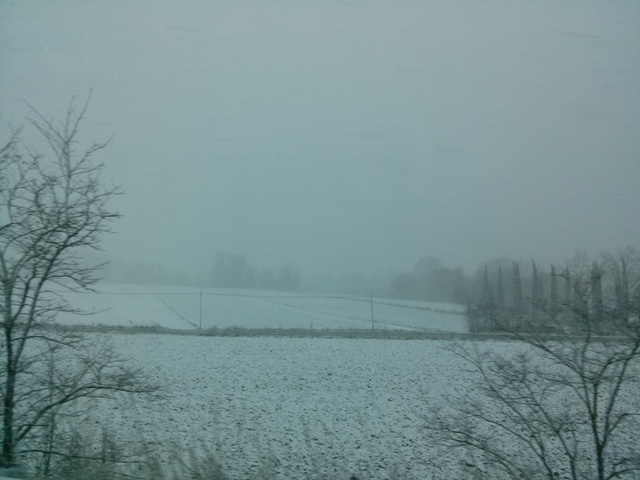 But by the time we get to Orvieto there’s not a flake!
We grab a delicious lunch at Montanucci, where as usual it’s a challenge to find a table – this place is ALWAYS packed, 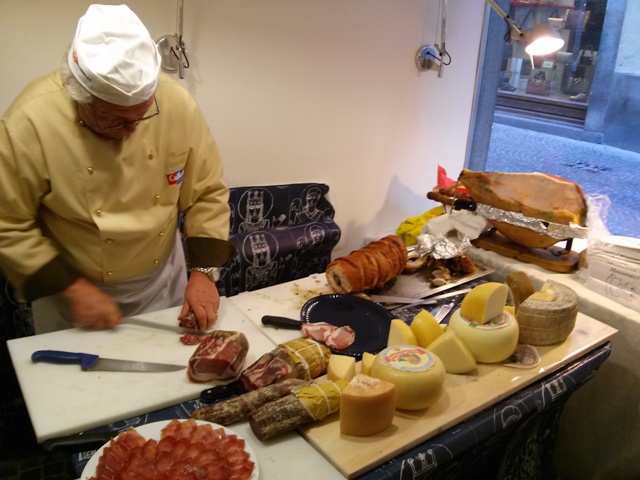 then return to Palazzo Piccolomini to change for an early evening concert, and Lorri grabs a photo with Cecil McBee, that legendary acoustic bass player. 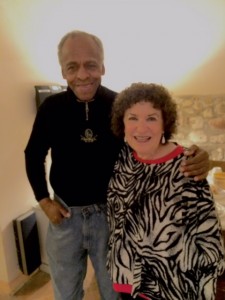 Teatro Mancinelli is our destination once again, always a delight.

Russ and Lorri, savvy jazz afficionados, had let us know the artists that were familiar to them who would be performing at this year’s festival, and we were able to include all of them in our concert lineup. 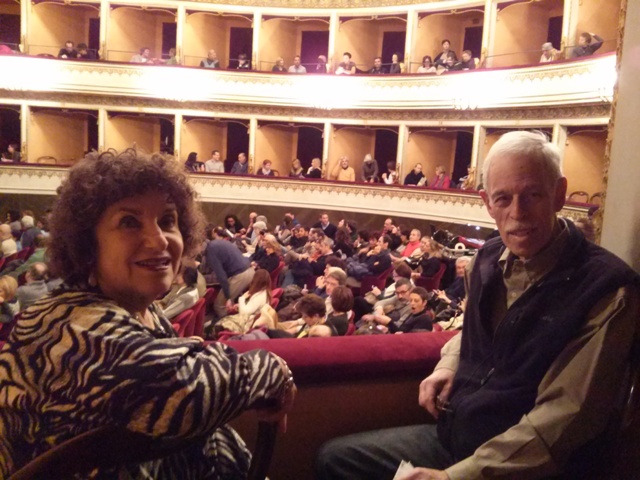 Anat Cohen, a jazz clarinetist, was on their list. She has brought a combo of young artists with whom she plays Chorro, a Brazilian jazzy folk predecessor of the better known samba and bossanova. 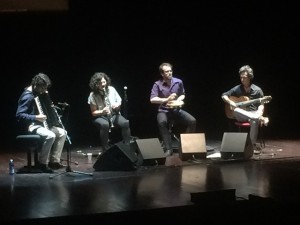 A terrific concert, and we’re all invited for a glass of Orvieto Classico with the artists afterwards. 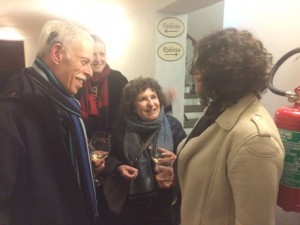 A Capodanno (New Years Eve) feast awaits us at Zeppelin tonight – and our palates are delighted with one course after another…crispy polenta topped with salmon draped with a creamy goat cheese sauce, a truffled cauliflower soup sprinkled with a crunch of hazlenuts and a crisp of Cinta Sinese (a prized belted pig of Siena) bacon, 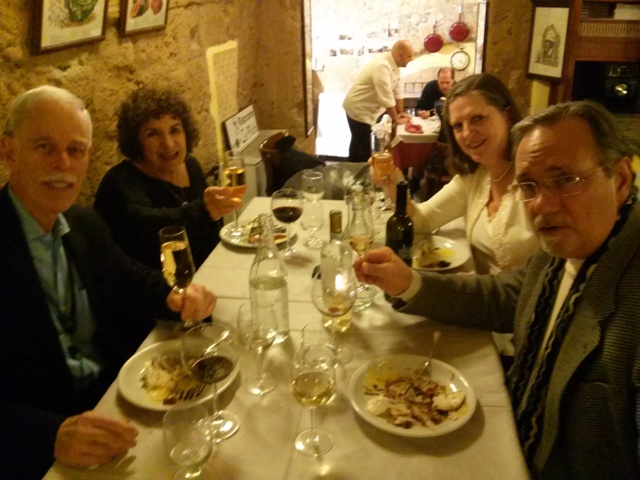 then this tender manicotti in white ragu of duck, roofed with a saffron parmiggiano crisp. 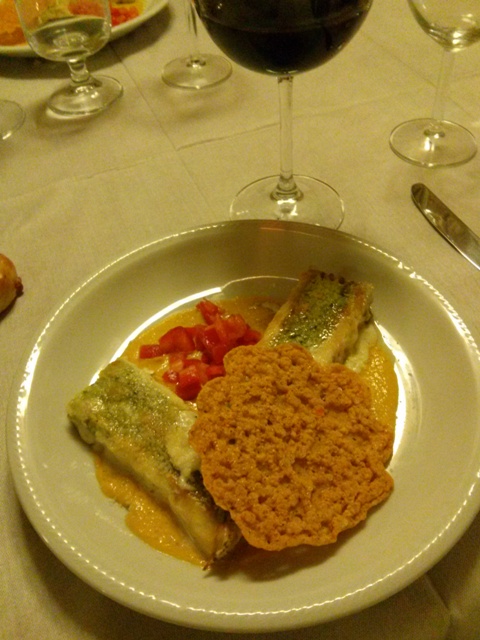 I manage a few bites of the main course, a delicious stuffed lamb, and even though I don’t usually like chestnut, I can’t stop eating this fabulous Mont Blanc of cream, chestnut purée and grappa until my plate is clean! 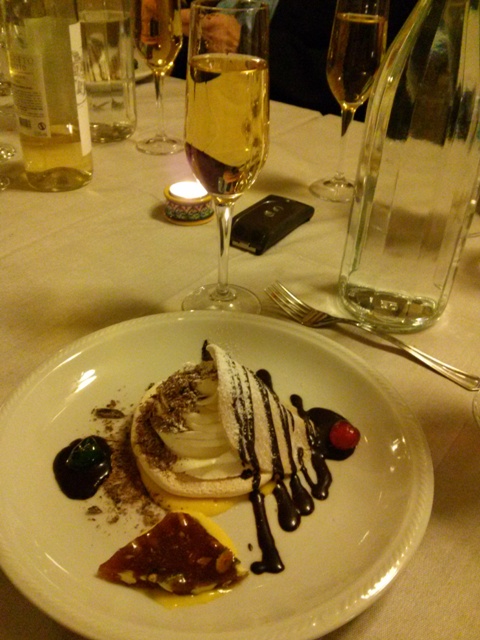 Zeppelin has moved from it’s previous location to RIGHT next to Palazzo Piccolomini – making it all too easy to hang around til way past midnight, chatting with Chef Lorenzo and his crew, 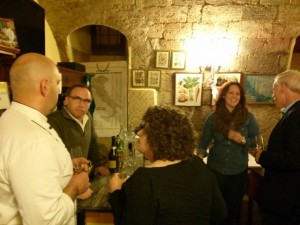