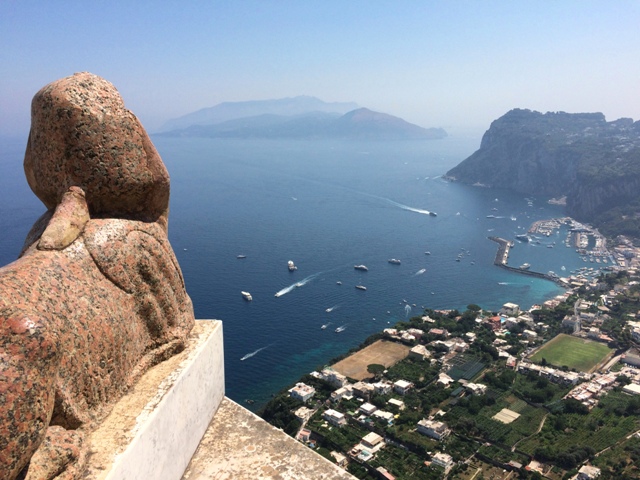 We’ll speed on the sea to Capri, but first we have to get to Amalfi from Maiori..along the barely-wide-enough-for-2-little-cars Amalfi Coast Highway…will these buses make it by each other? Not without a LOT of manoeuvring! 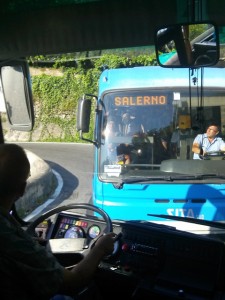 I continue to be in awe of these patient and skillful drivers – I can’t imagine driving a car on this road (although Kirk does it expertly), much less a huge BUS!
The sea is wide open – no challenge to avoid other boats here – and soon Capri comes into view. See that dot of white about a third of the way down the ridge? 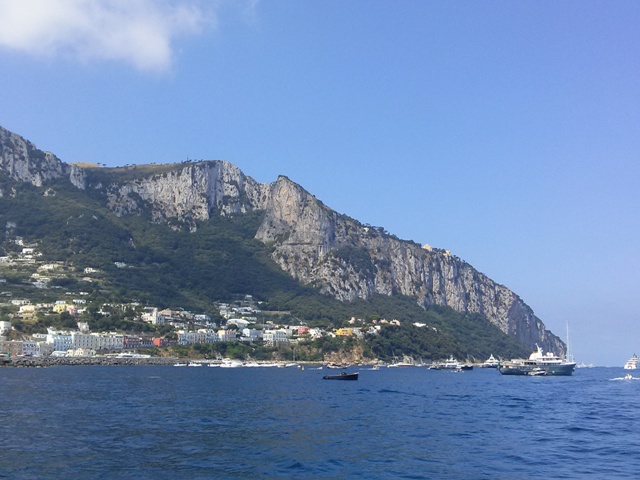 That’s our destination – who knows what it is?!
We quickly load into a taxi and head up the rock from Marina Grande, 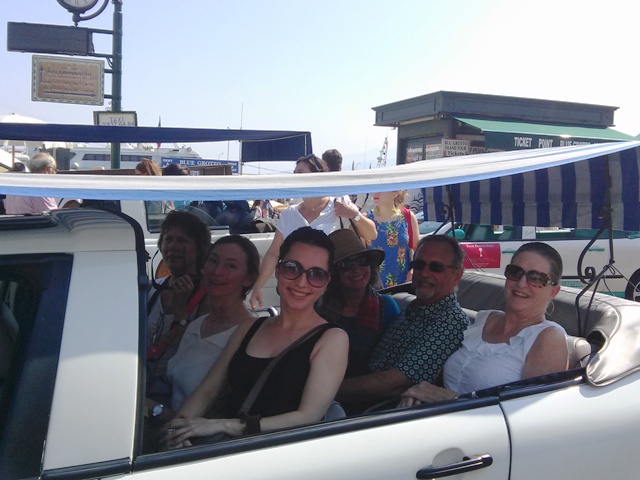 and soon we’re walking the peaceful paths of Villa San Michele in Anacapri, 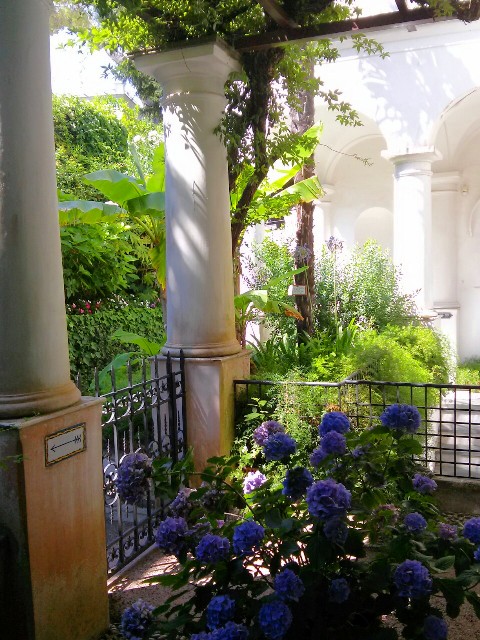 Dr. Axel Munthe’s exquisite house and gardens built over the ruins of a Roman emperor’s palace in the early 1900s. We love how he incorporated Roman relics discovered during construction – a marble face here, a bit of a pillar there… 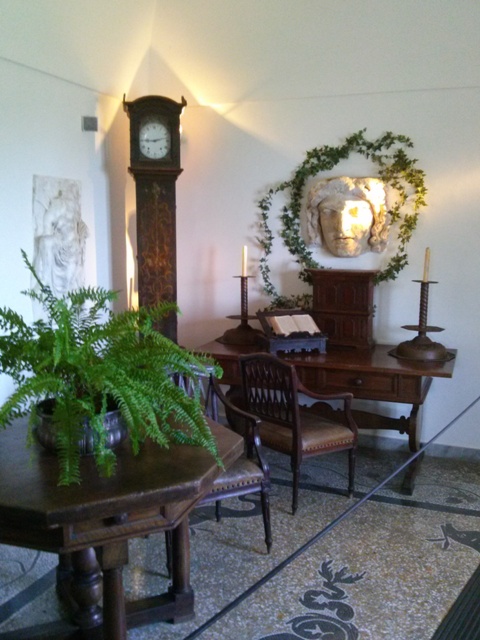 Through the shaded gardens, 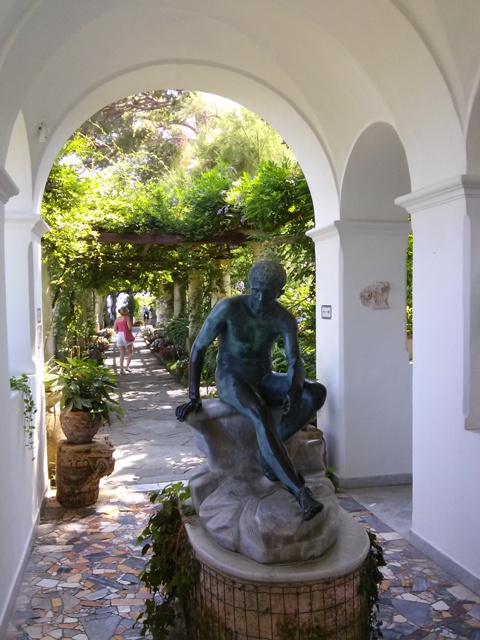 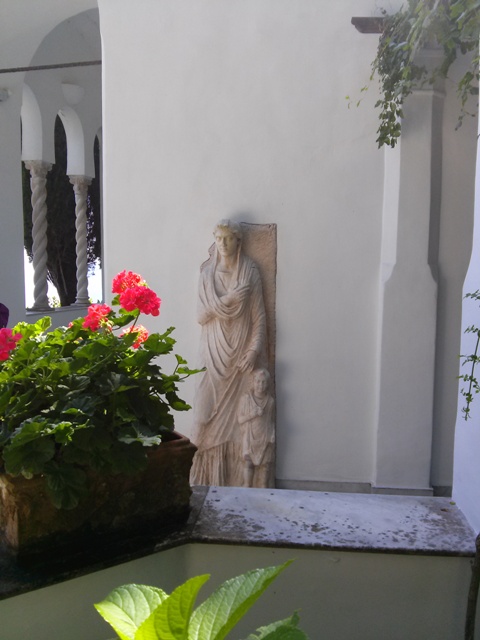 our group has expanded a bit, with the addition of two of the marvelous musicians of the Amalfi Coast Music Festival, 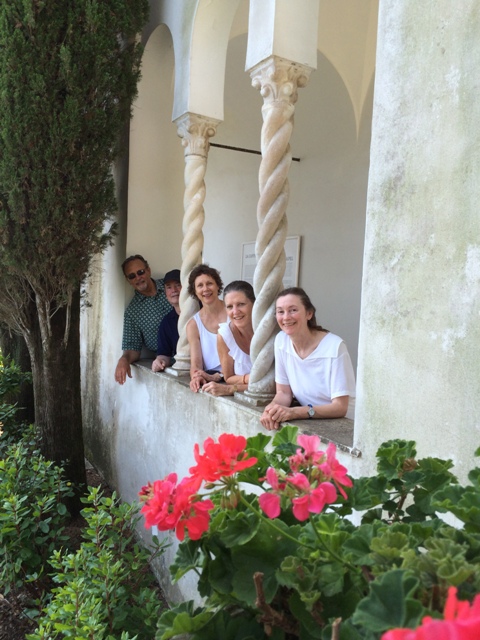 pianist Boaz Sharon and flutist Nancy Stagnitta, who’s taking the photo.
And there, far below is where we sailed in, with this red granite sphinx gazing down on us – we could see the white building, but not this red speck from so far away.

Olga and her daughter have been relaxing on the rooftop cafe, and we join them there 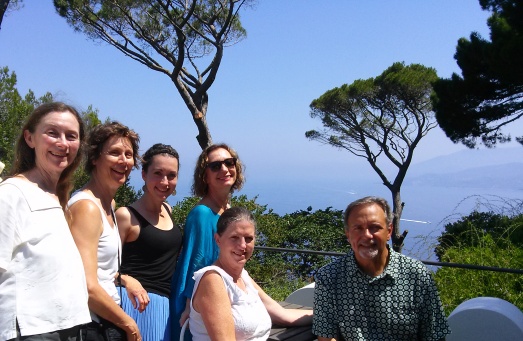 before browsing the shops on the way back to Anacapri’s main square, 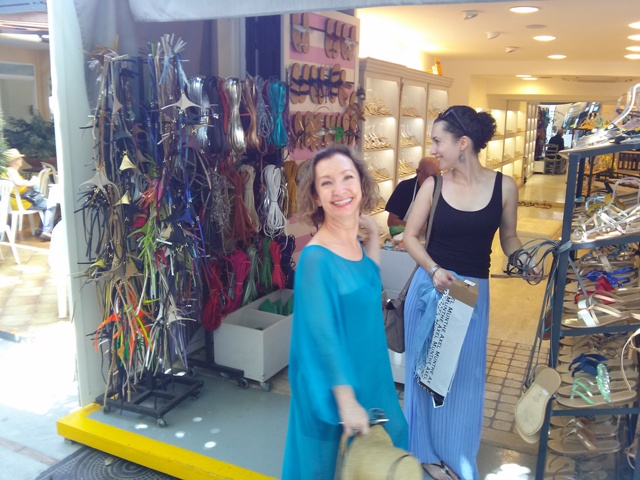 then making our way 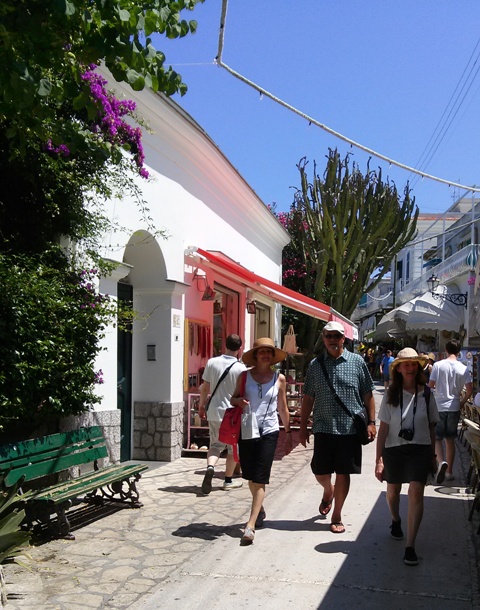 to lunch at Il Solitario. 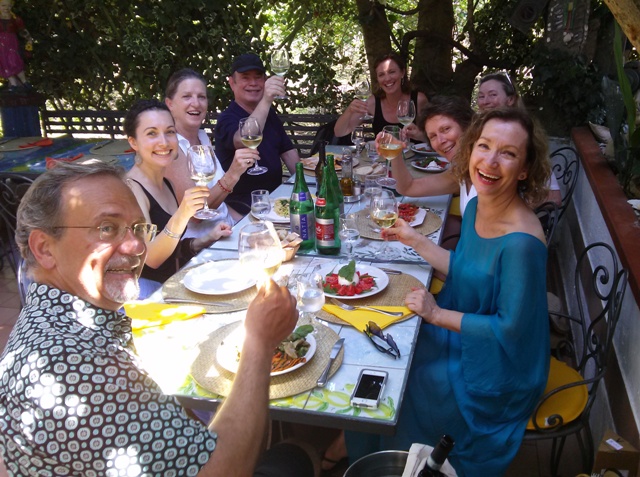 Sharing a toast, we all agree that a Caprese Salad tastes best in Capri, 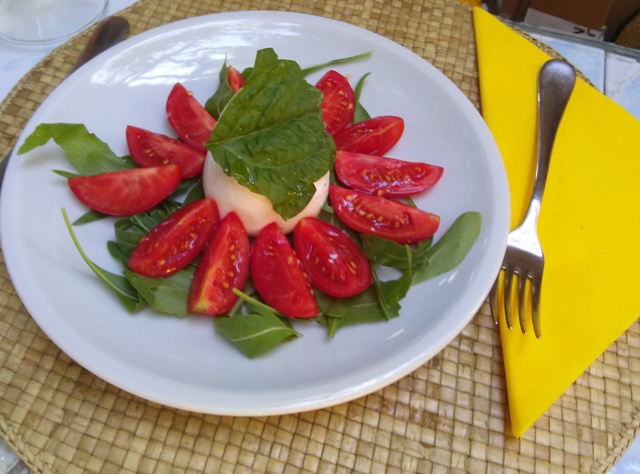 and imagine the fishermen catching our lunch early this morning. 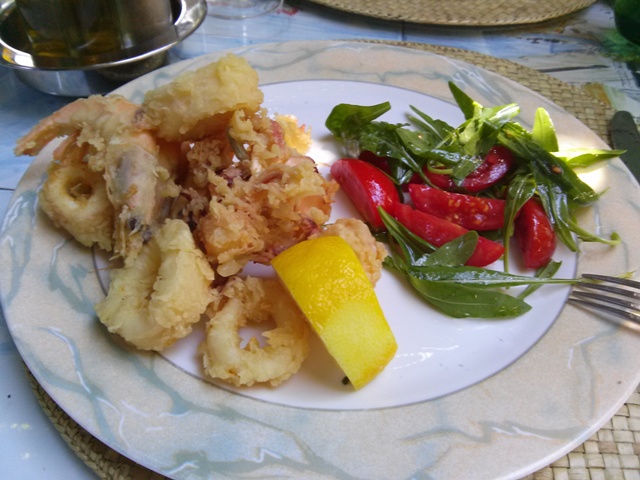 The only way to get from the marina, and Capritown, to Anacapri until 1874 when a road was built, was a still-usable stairway zigzagged into the cliff. The ride down, along the side of Monte Solaro, is as scary as that staircase! 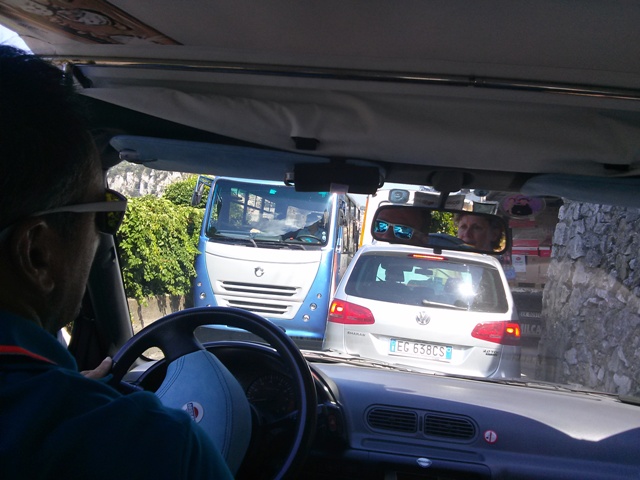 Anacapri is the quieter, less-glitzy town on the island, Capritown is the one FILLED with high-end shops 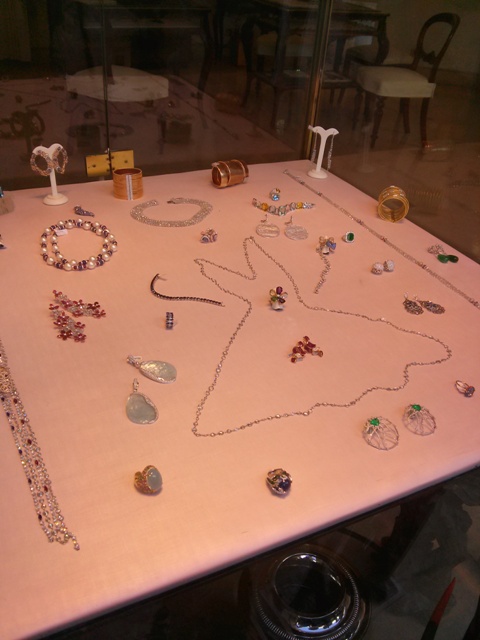 – including a grand total of FIVE Ferragamos! 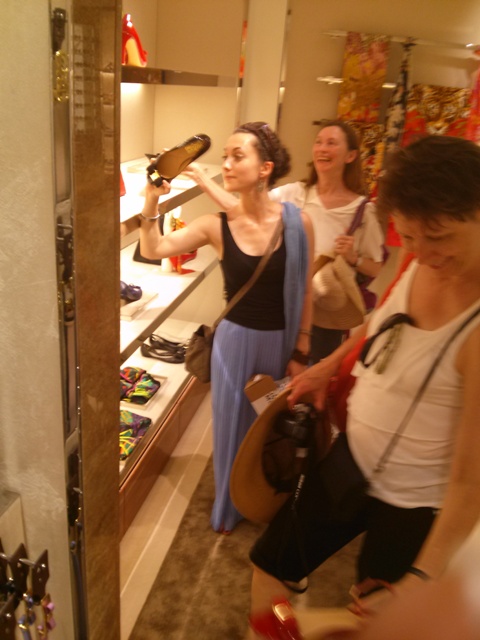 But as you know from our stay here earlier in July, the entire island is filled with beauty – keep looking around and up as you shop and stroll! 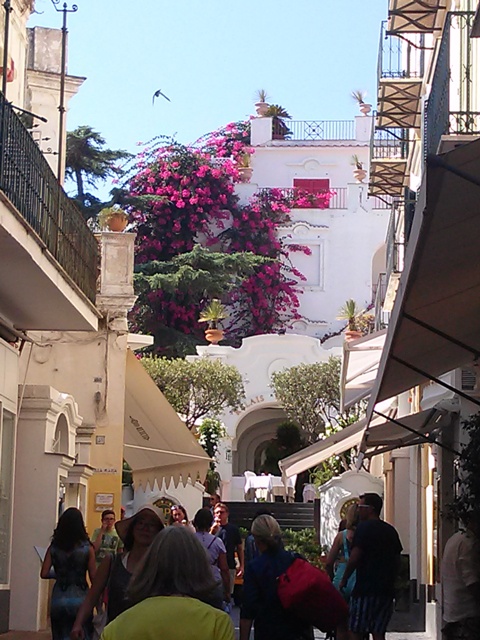 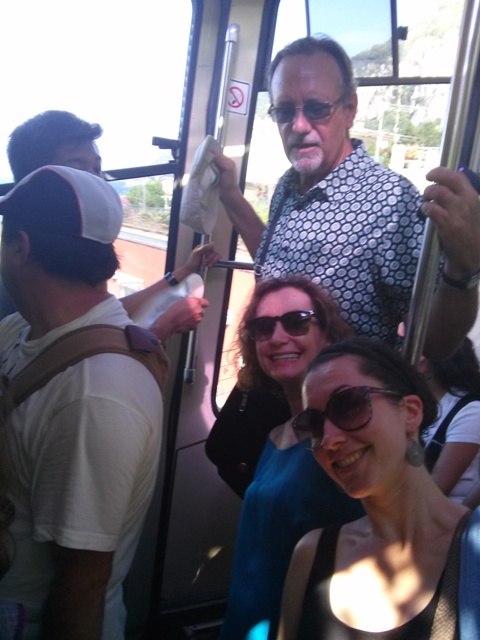 and we’re back on the boat towards the mainland – arrivederci, Capri! 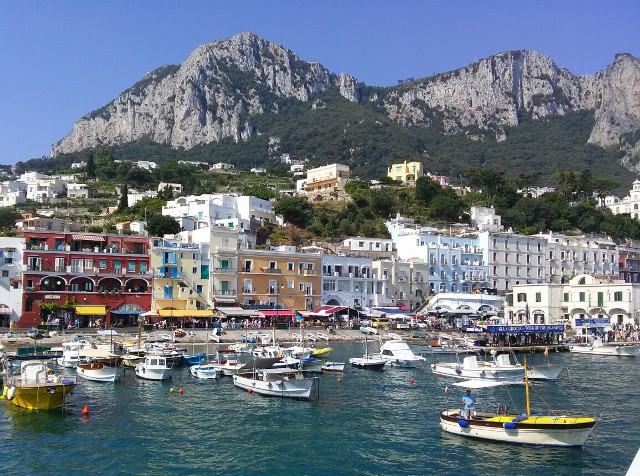 Oh how much beauty that rock hides in its crevices! 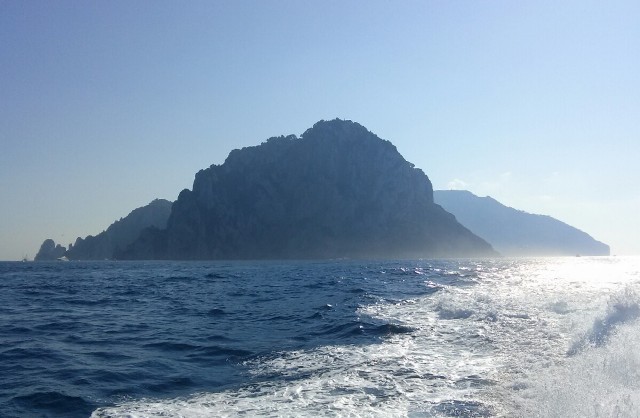 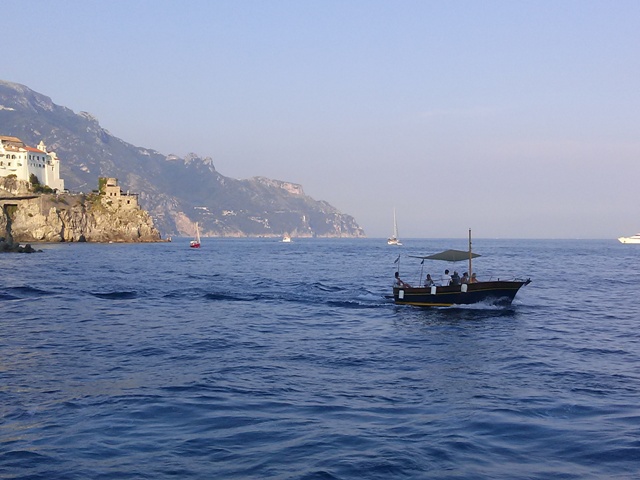 and we meet again for a final dinner in Maiori. 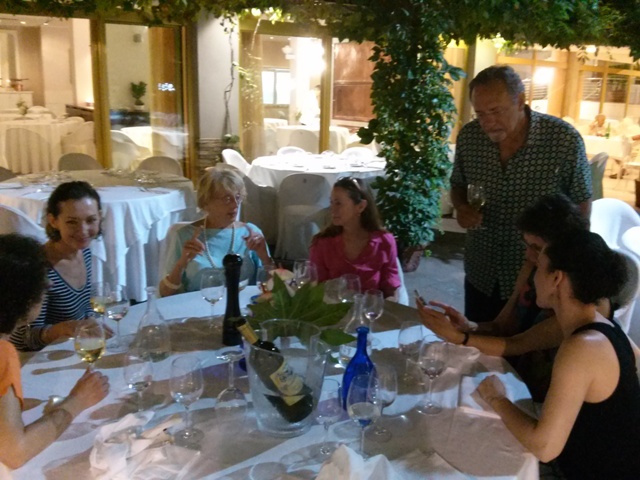 Chatting with Edith, the charming mother of Leslie, the festival director, we’re the last to leave…and tomorrow we’ll say goodbye to this gorgeous coast and head for Tuscany!