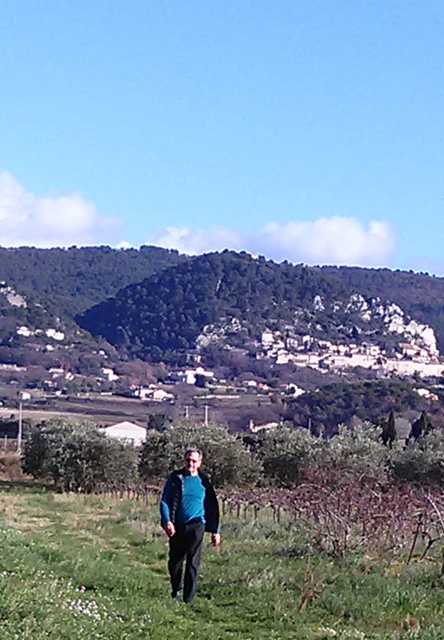 Memories and Wine in Provence

Interested in a Music and Markets Tour? We’d love to hear from you!
We’re looking ahead to Spring – Prague and Budapest, or Venice and the Veneto – join us!

Today we’re going Christmas shopping – a couple of months late. You know that cool dark cave we’ve mentioned, down spooky ancient stairs to a dungeon like area below our apartment? Well it’s time to put something delicious and interesting in there, not just unused furniture or household items. Something we can find in the hills north of Aix, so we’re driving to an area filled with 15 years of memories, past the pale pink of almonds, 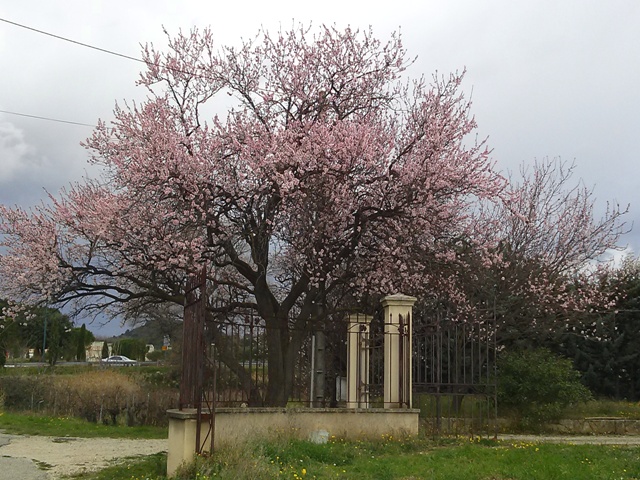 the first blooms of spring.
We’ll end up in the pretty wine village of Gigondas, but first we head for the places that bring a smile to our faces – Sablet, the village that shines on its hill at night, 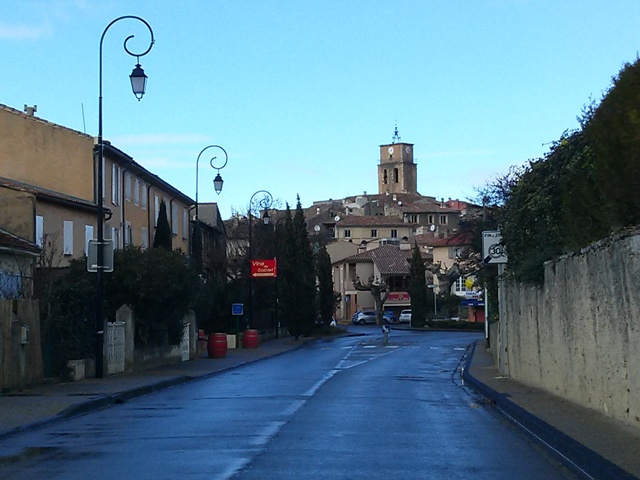 best viewed from our bedroom window in our dear friend Karen’s former beautiful countryside villa where we first visited in the summer of 2000. A little further down the road Seguret clings to the side of its hill. 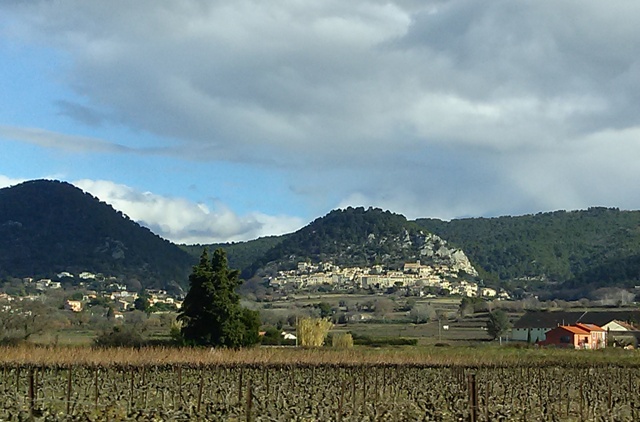 Another village that gleamed its light to the villa at night, and where we toasted an elegant civil wedding that preceded a joyous celebration by the vines in the garden of the villa later that year.
By now it’s lunchtime so we buzz on to Vaison la Romaine, where the old parking lot, surrounded by cafés, is now paved over. 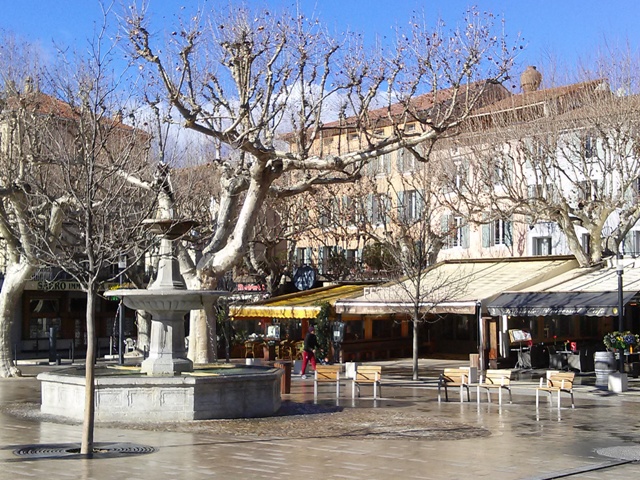 Lunch at a café is forgettable, but the town is still full of fun memories – the Roman ruins which watched over our departed friend Suzy’s house 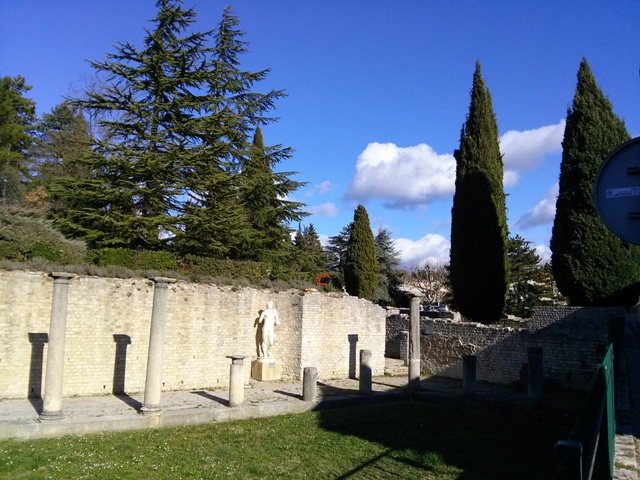 (she always said Marc Antony was looking in her window), and, beneath the medieval part of town, that graceful Roman bridge, 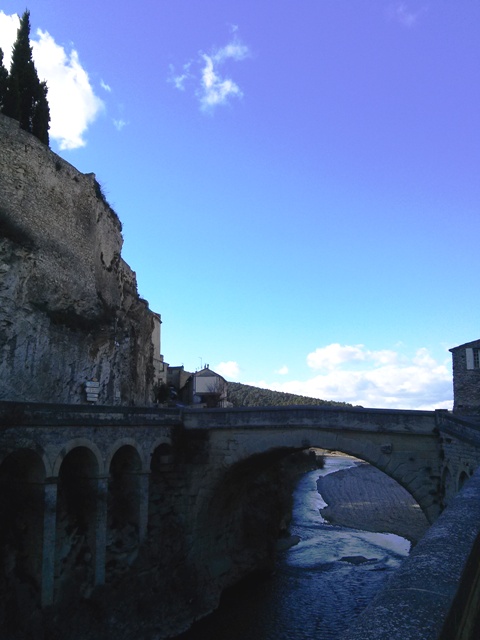 which survived the horrific 1992 floods even when all of the newer bridges were washed away.
No one’s home at the villa where we spent many happy times today, so we walk around the back, Kirk recalling the hours prepping the garden to be as beautiful as possible for the wedding of Miles (Karen’s son) & Mira in the fall of 2000.

I can still picture that lovely couple, framed by the dramatic Dentelles in the background, that lush vineyard spreading behind them. 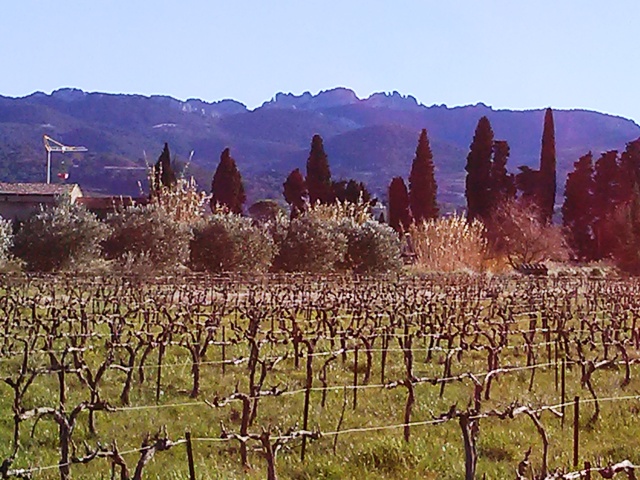 Oh the hours we’ve spent here, relaxing, feasting, laughing, celebrating….
The little village of Gigondas is tucked up against the jagged Dentelles, surrounded by prime vineyards. 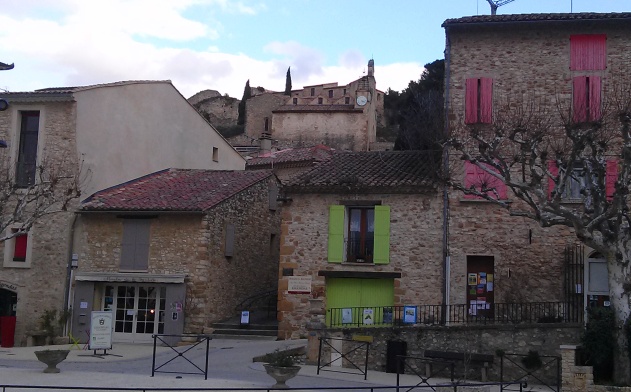 We’ve had a few choice bottles from here through the years, and stop by the village wine shop, where we have a choice of vintages from all the surrounding vineyards – Christmas shopping done!
Life moves on – but the memories remain, to enjoy forever! 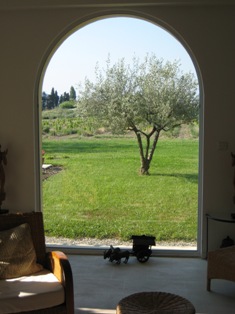 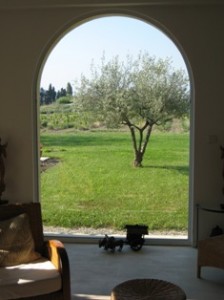 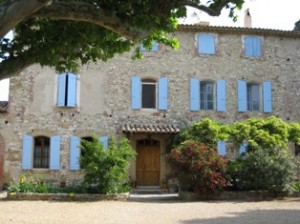 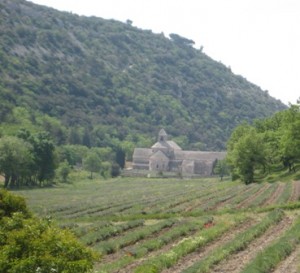 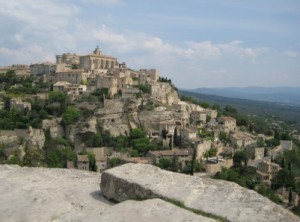 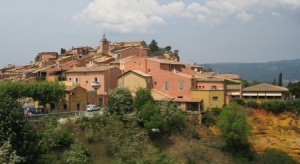 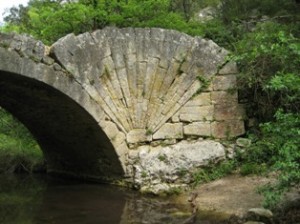 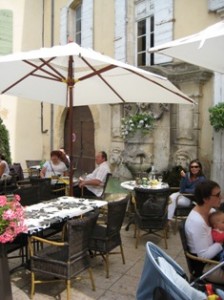