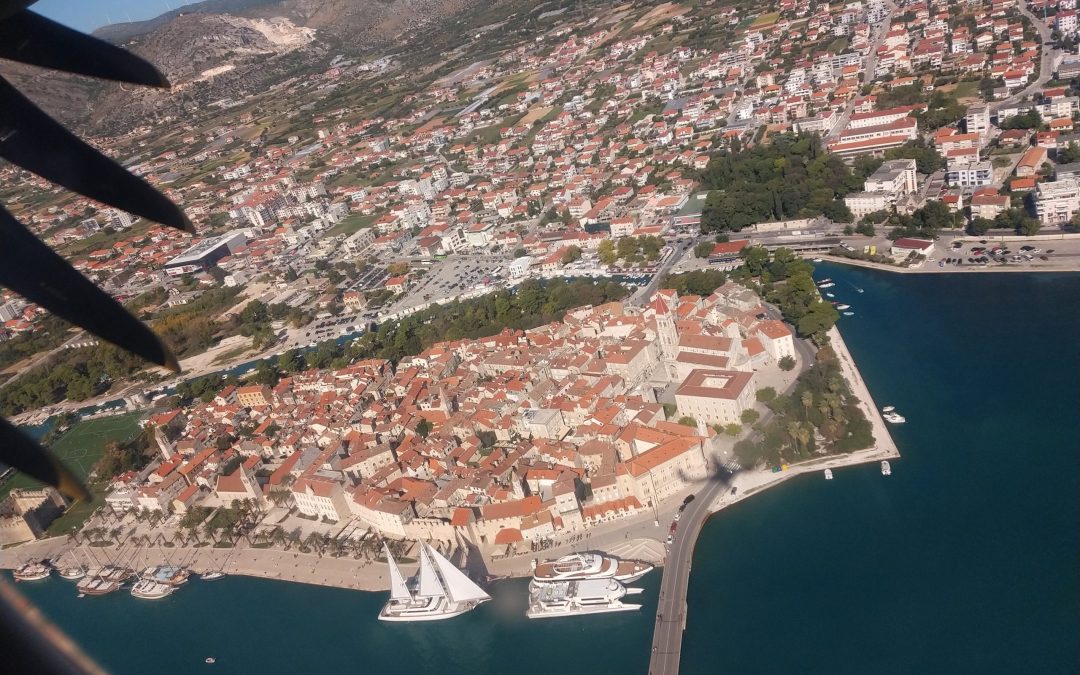 A Tiny Island in the Adriatic

Since our first glimpse of Trogir, as we came in for a landing (yes on a prop plane – how often does that happen?!) at the Split airport, 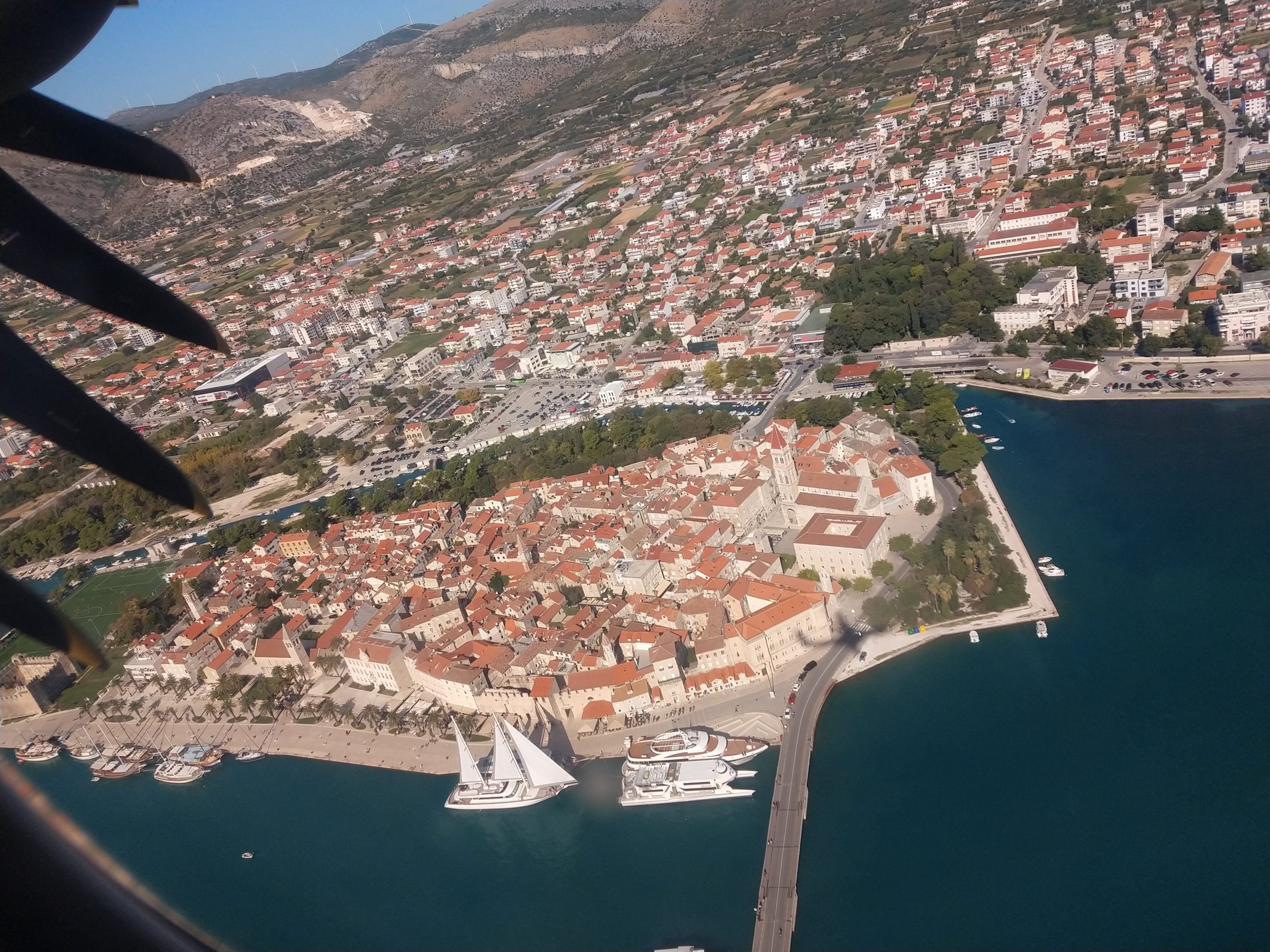 we’ve wanted to explore this intriguing barely-an-island. Just steps from the mainland, it’s connected by a couple of short bridges, then further bridged to a larger island, Ciovo.
It’s an easy 30 minute drive from Split, our home for two months, and like all of the places we’ve visited this Covid-changed fall, it looks much different, with just a few locals out and about, than the Youtube videos we’ve watched, when each square, promenade or bridge is jammed with people. Imagine standing in front of the Mona Lisa at the Louvre, or in the middle of St. Mark’s Square in Venice, alone, just taking it in at your leisure…it’s a pleasure!
We choose a couple of pastries at the first bakery we pass, then settle in with our cappuccinos at a main-square cafe, enjoying the view of Trogir’s showpiece – the Cathedral of St. Lawrence. 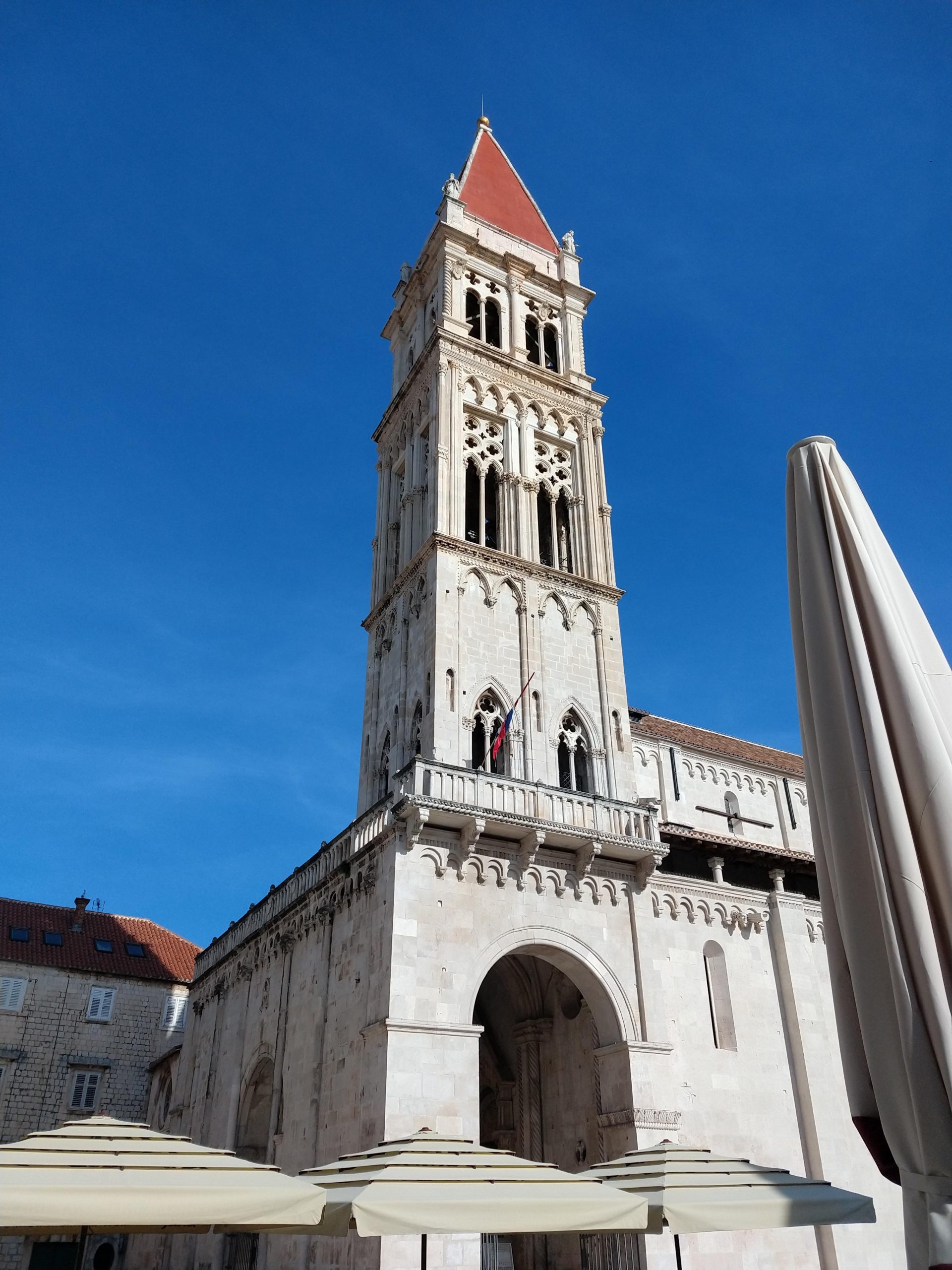 That gorgeous bell tower alone took 200 years to build – the entire edifice was built from the 13th to 17th centuries. Gothic arches on the first level, then Venetian Gothic (a taste of what we’ll continue to spy along the twisting lanes of the interior)  topped by Renaissance – an architectural lesson in stone.
Across from the cathedral is the 15th century St. Sebastian’s church, topped by the town clock, added in the Renaissance era. 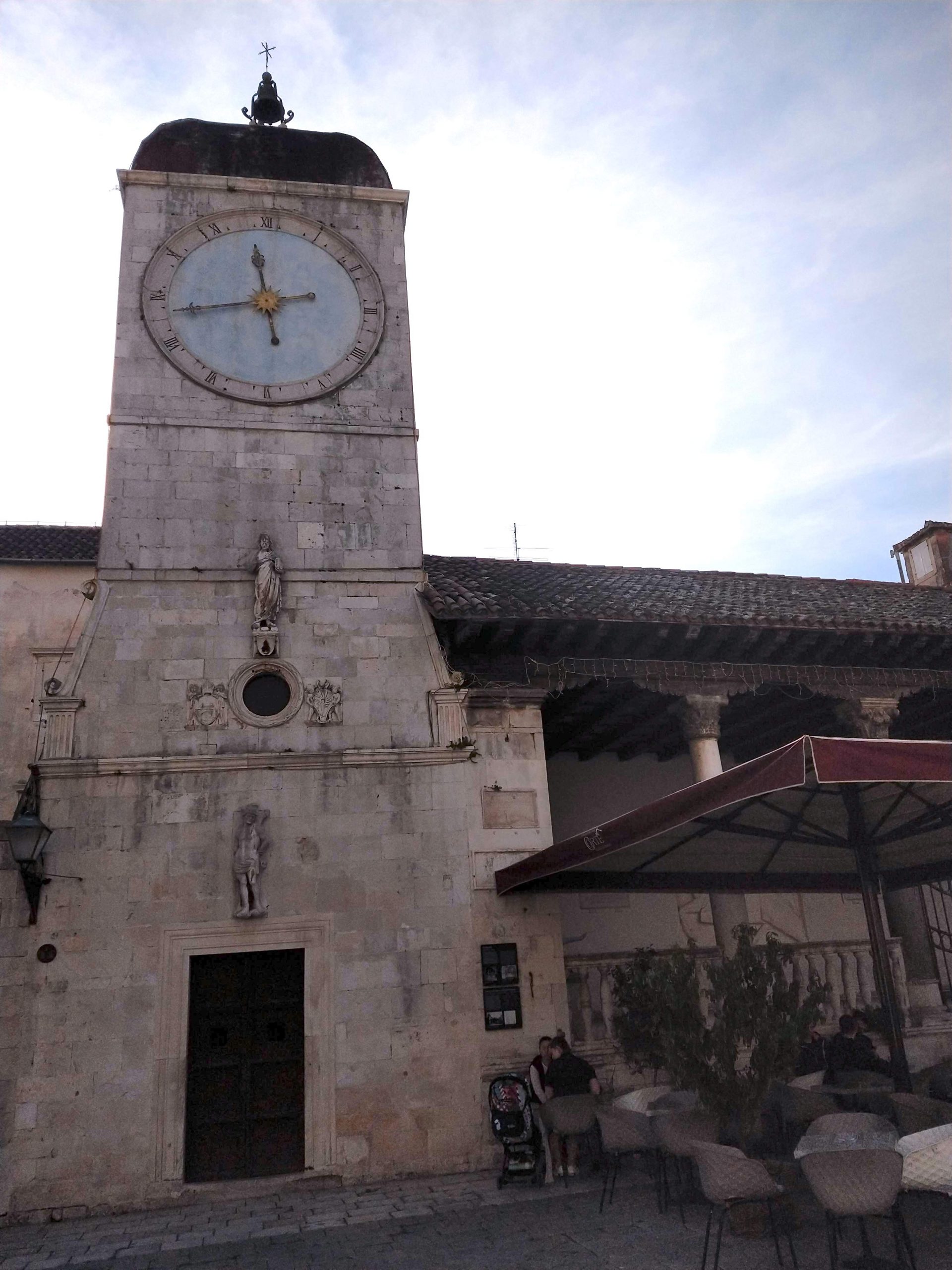 Beside the church, the Town Loggia hides behind cafe umbrellas.
The town hall anchors another side of the plaza, inviting a peek into its Gothic courtyard. 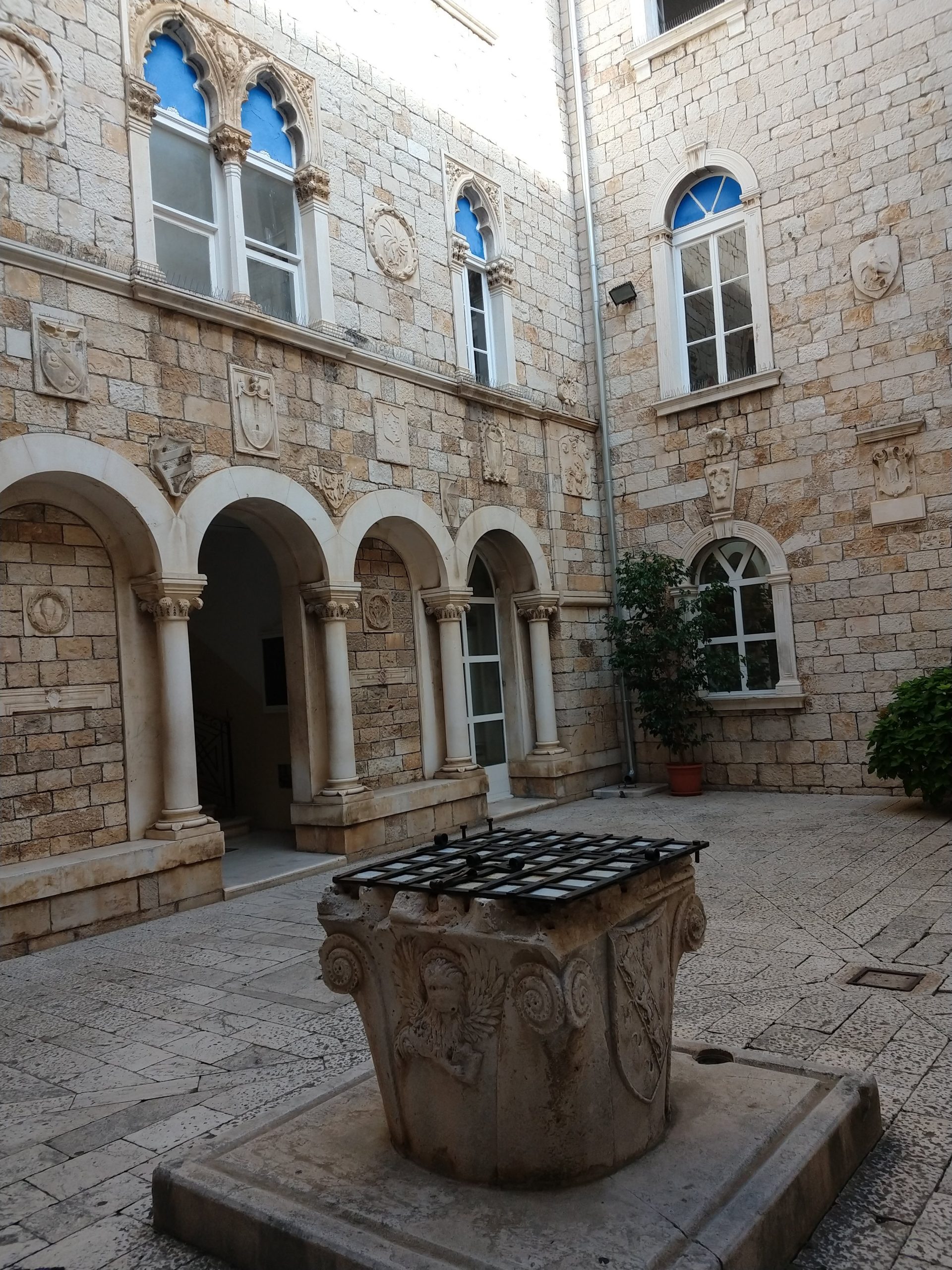 One of the many Venetian-style wells on this coast, this one is carved with the winged lion of St. Mark, the symbol of the Venetian Republic, which ruled the area in the 1400s. On the walls are coats of arms of noble families of the era.
Tiny though the island is, we have no trouble filling a day with wandering its maze of marble streets, enclosed by sturdy medieval walls. 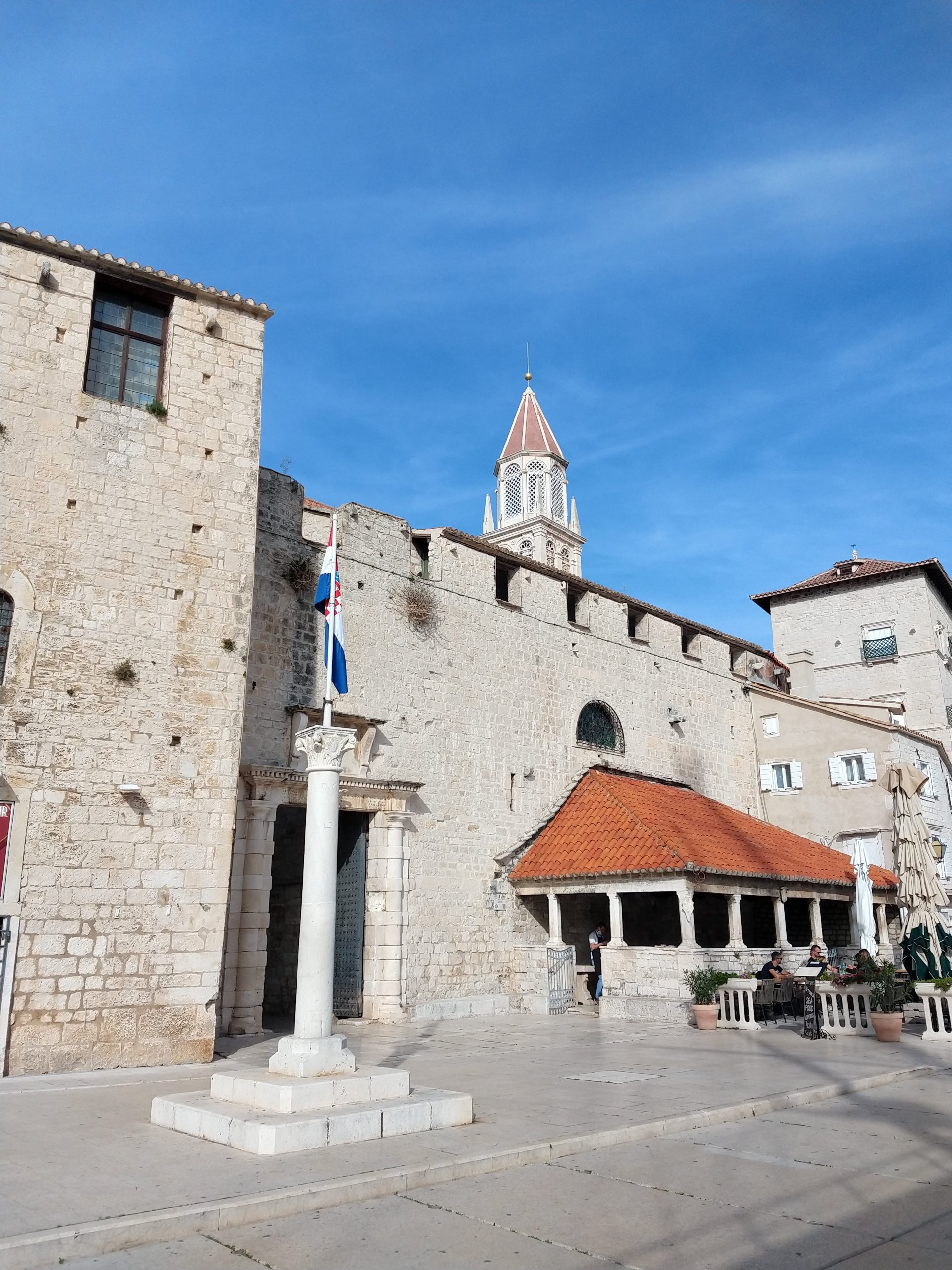 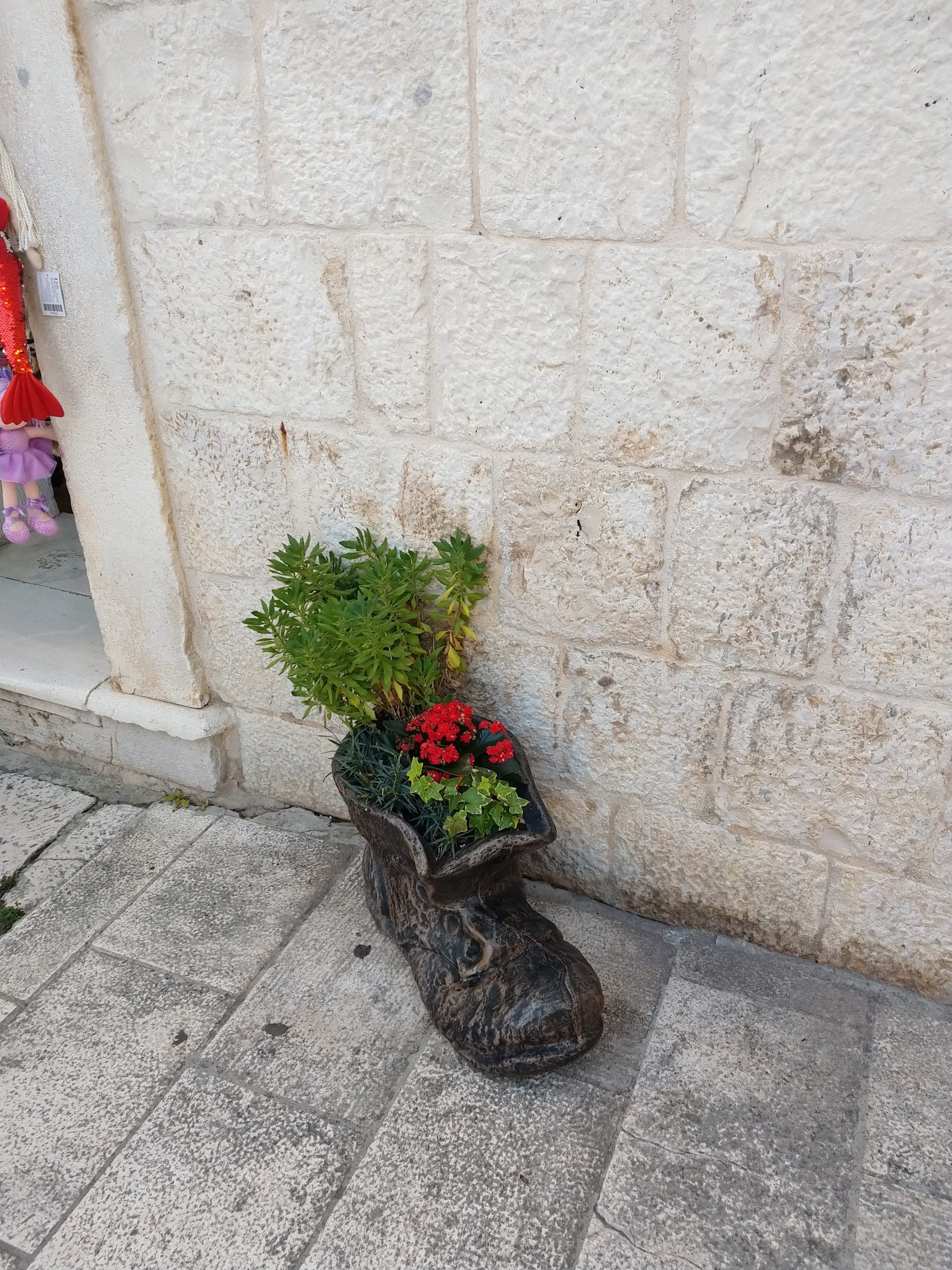 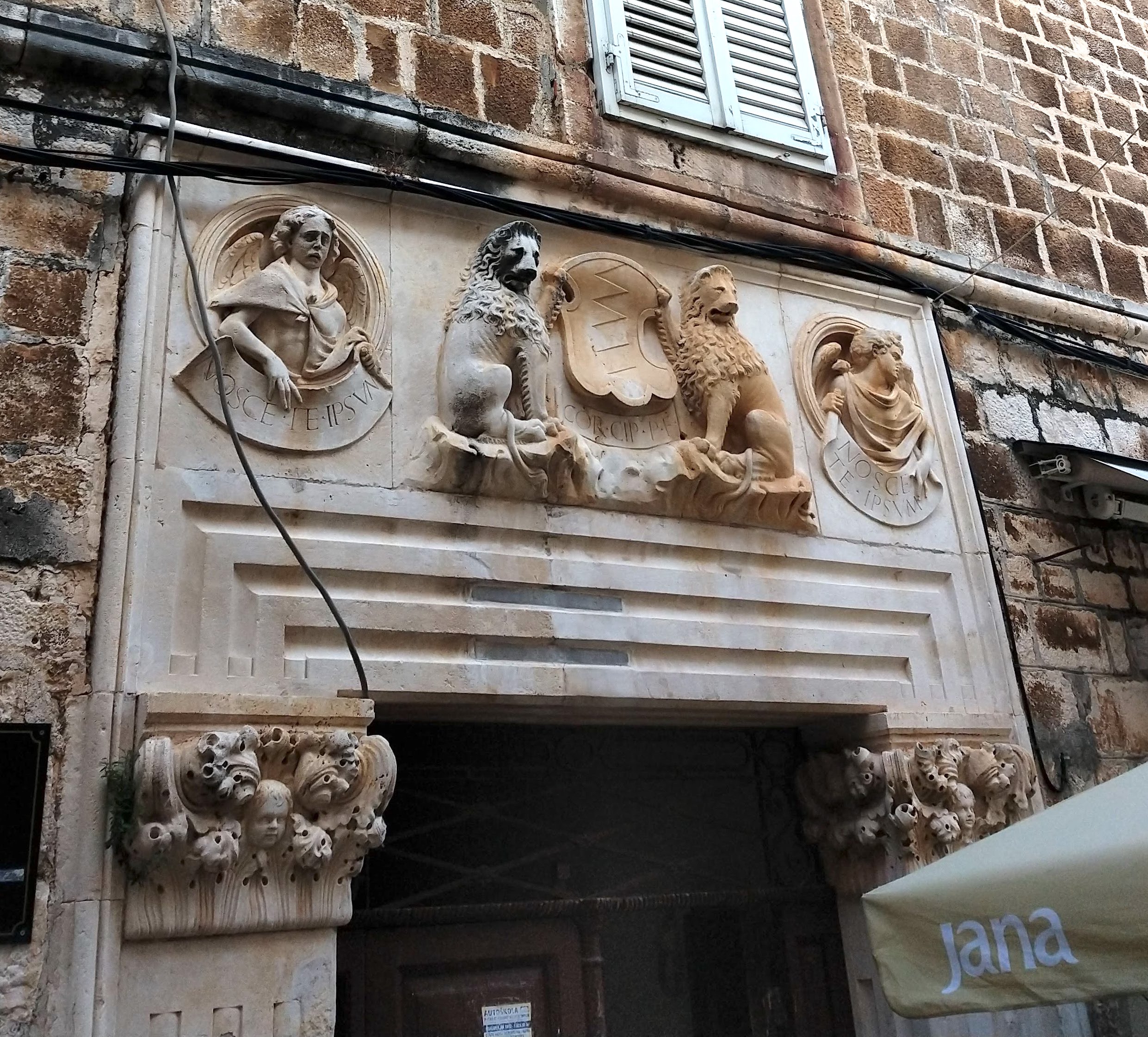 our eyes dart from one intriguing sight to another. 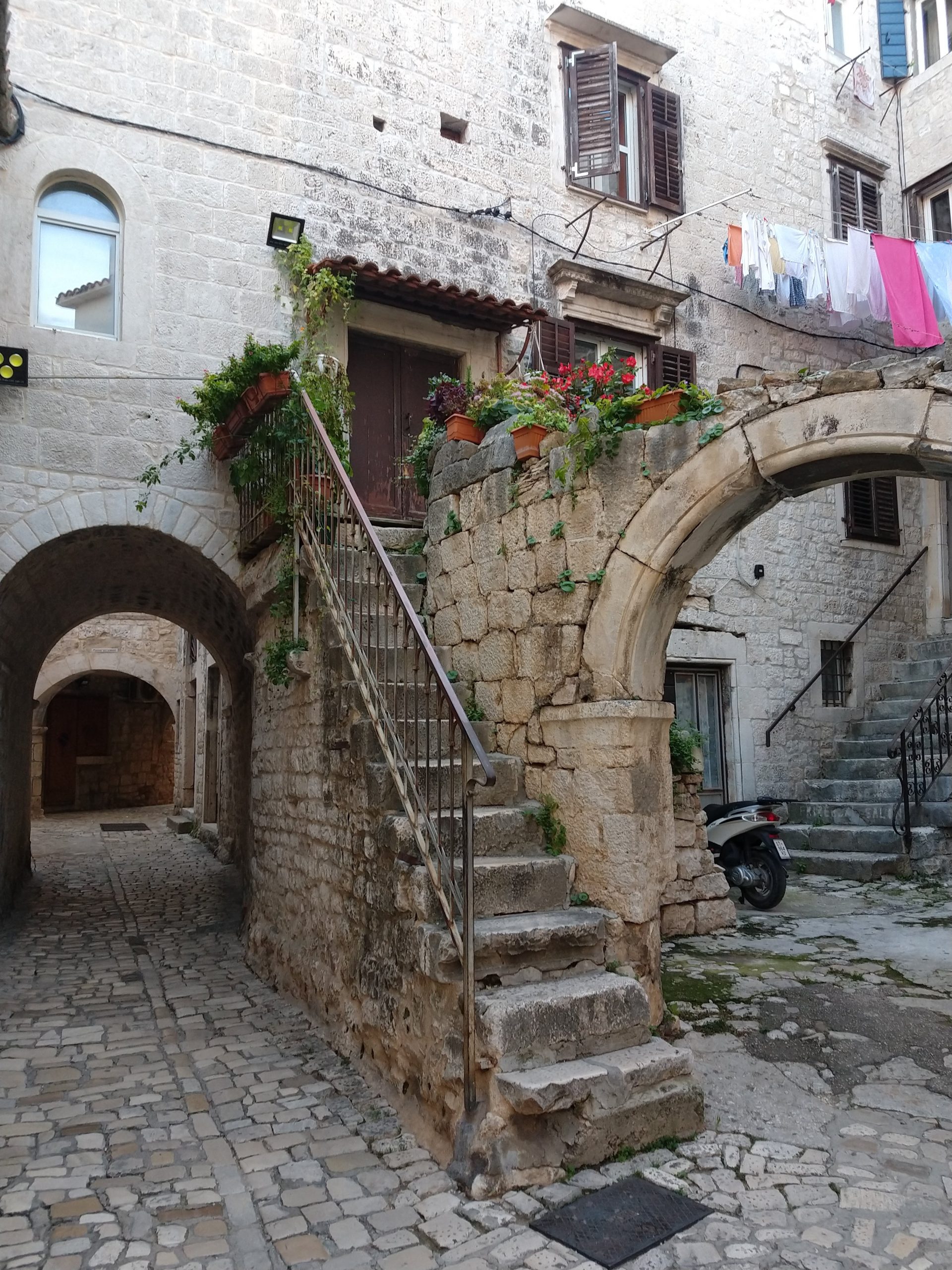 We pass an elegant entry into a palace courtyard, now a vacation rental 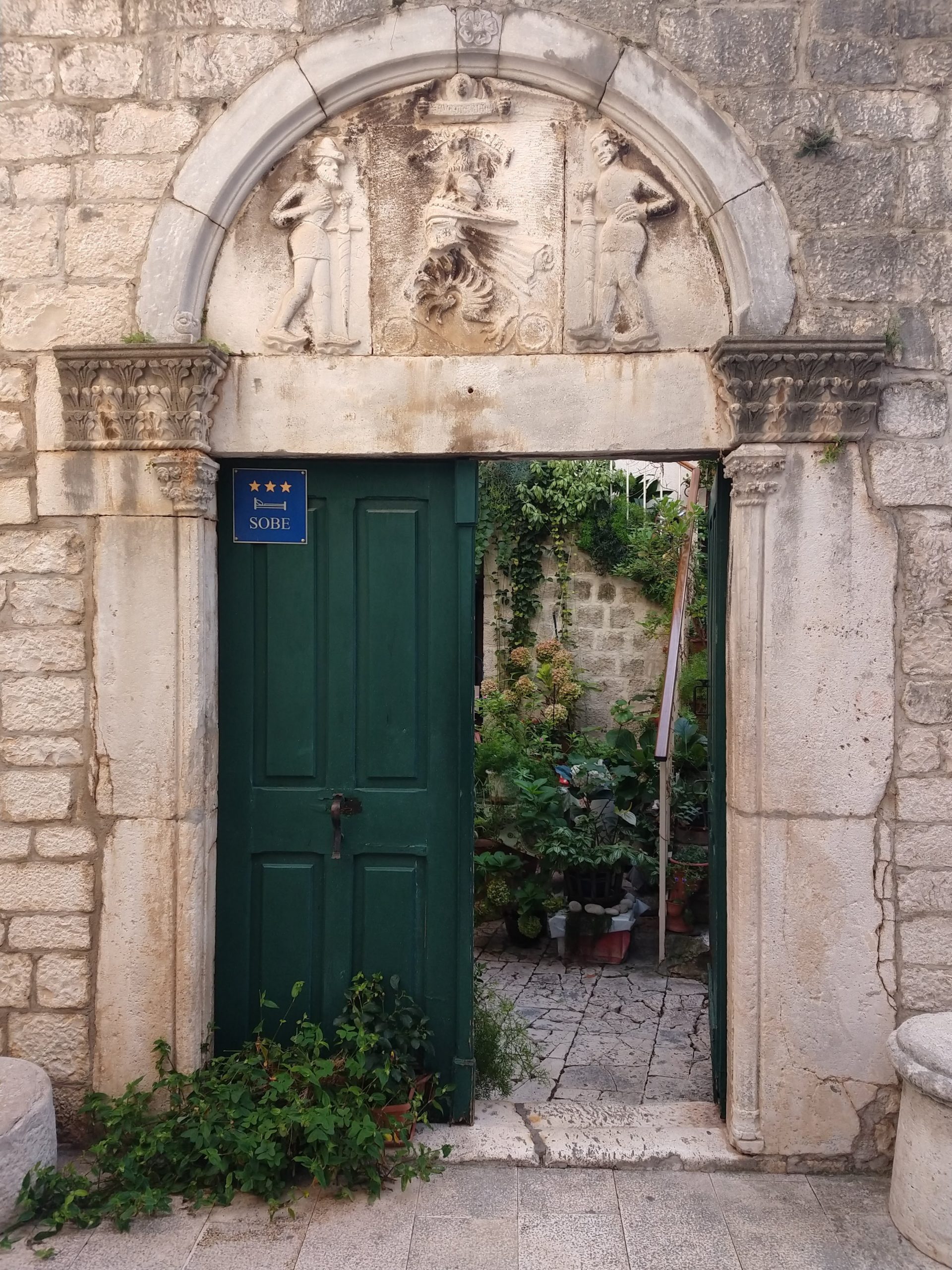 and keep looking up to take in the Venetian gothic windows 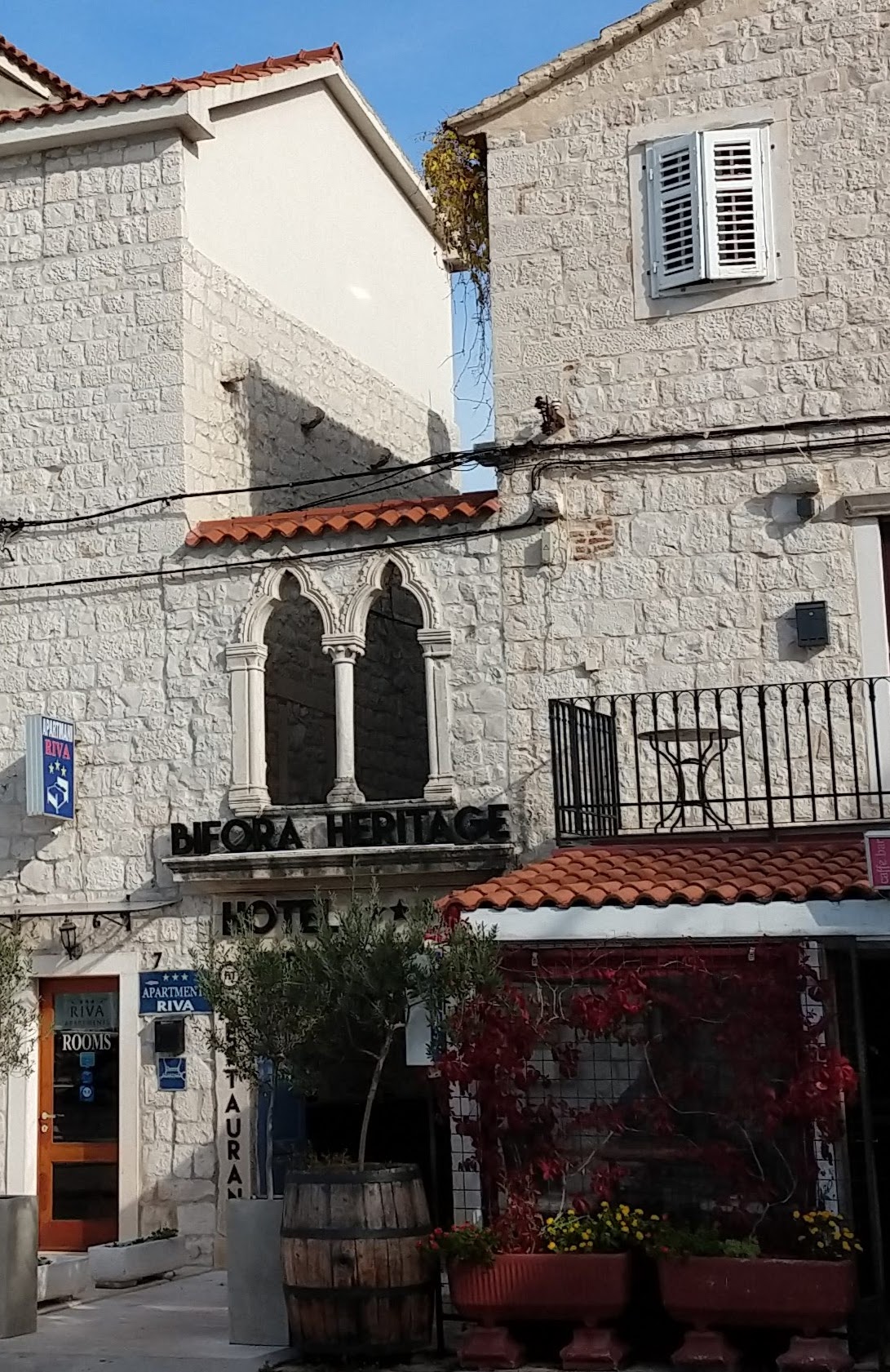 scattered through the lanes. 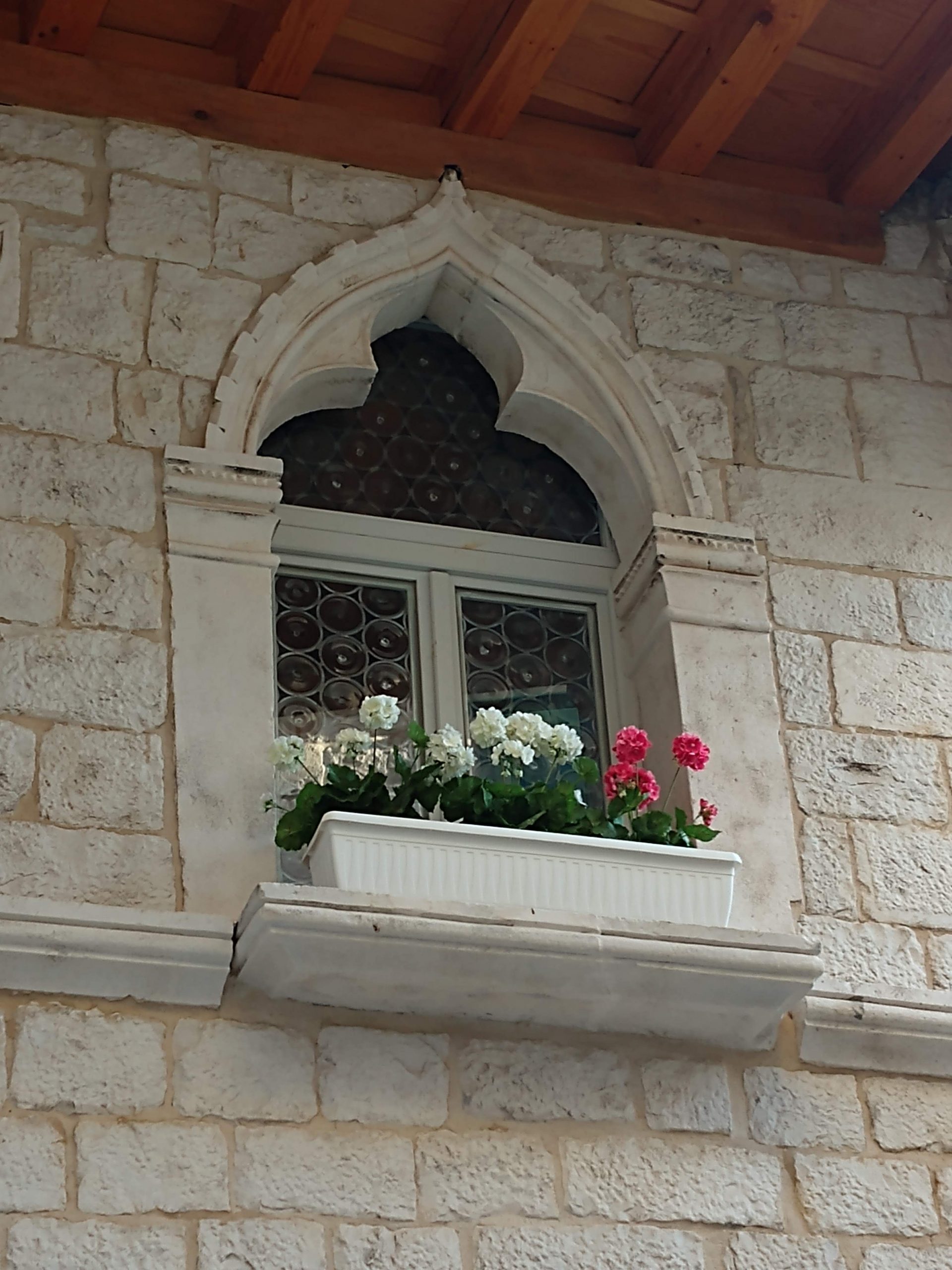 Not many places are serving meals in the off-season, but after walking across a bridge to Ciovo island to appreciate the views of Trogir, 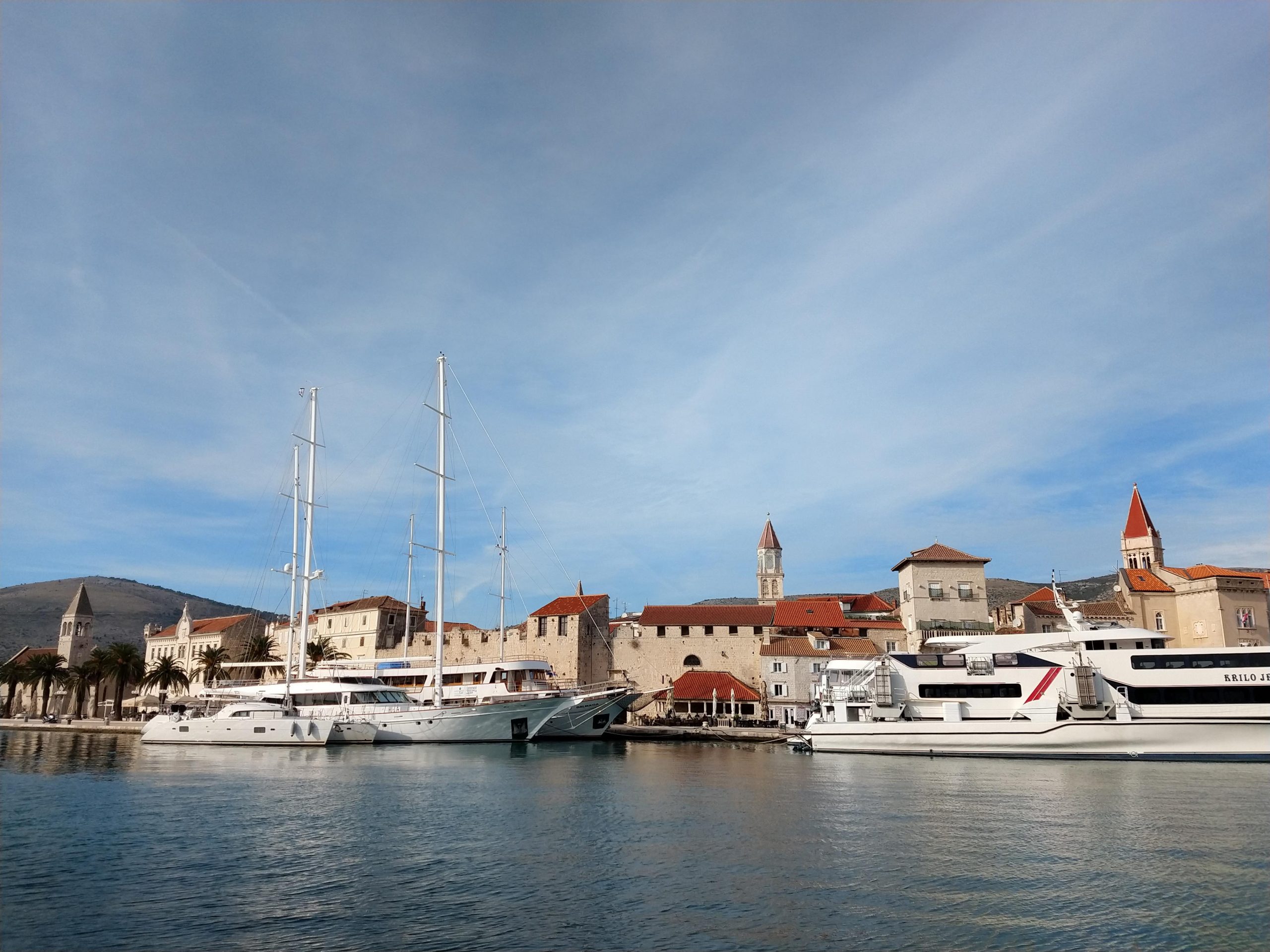 we return and find a picturesque spot by the old fish market, 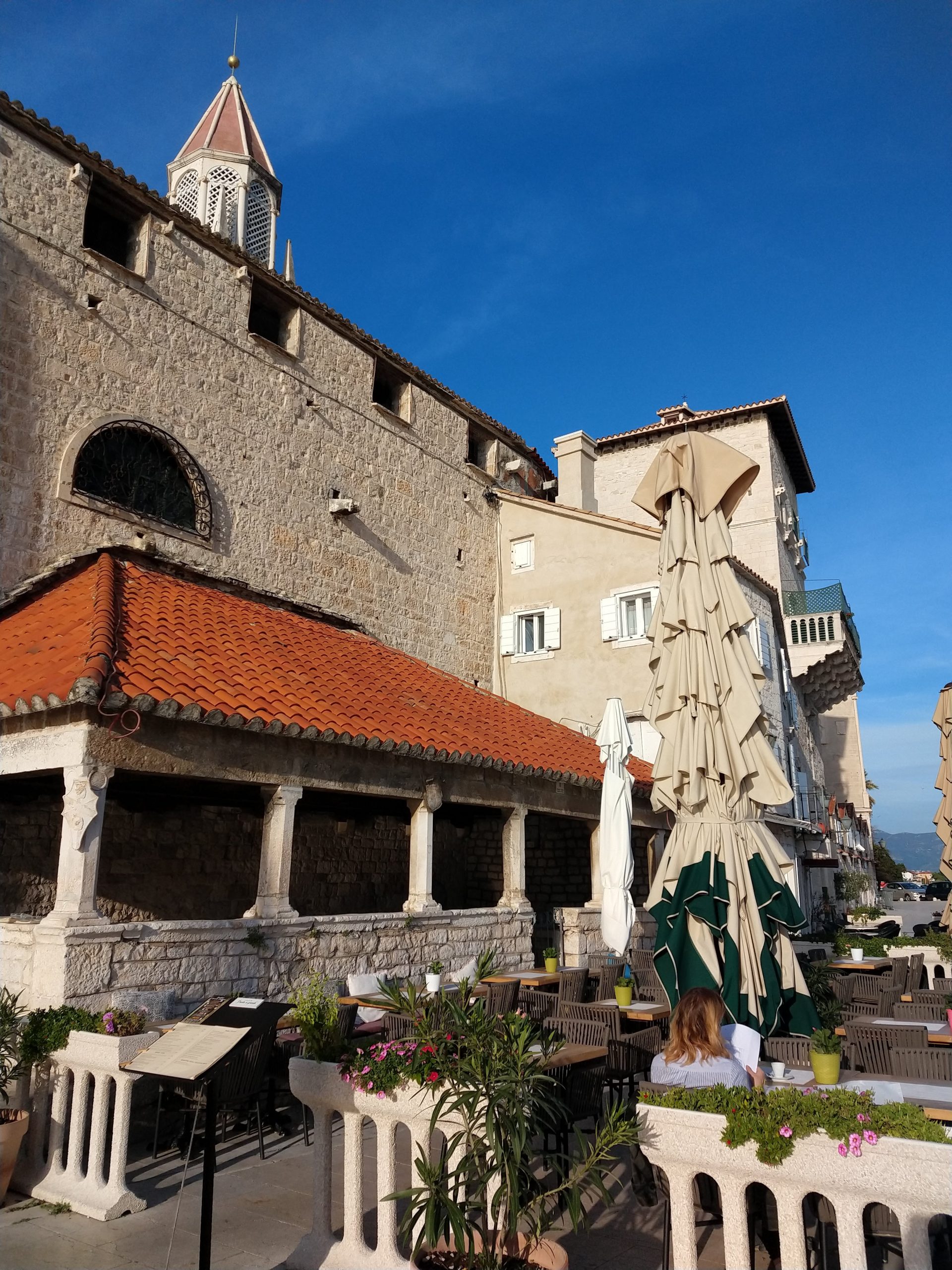 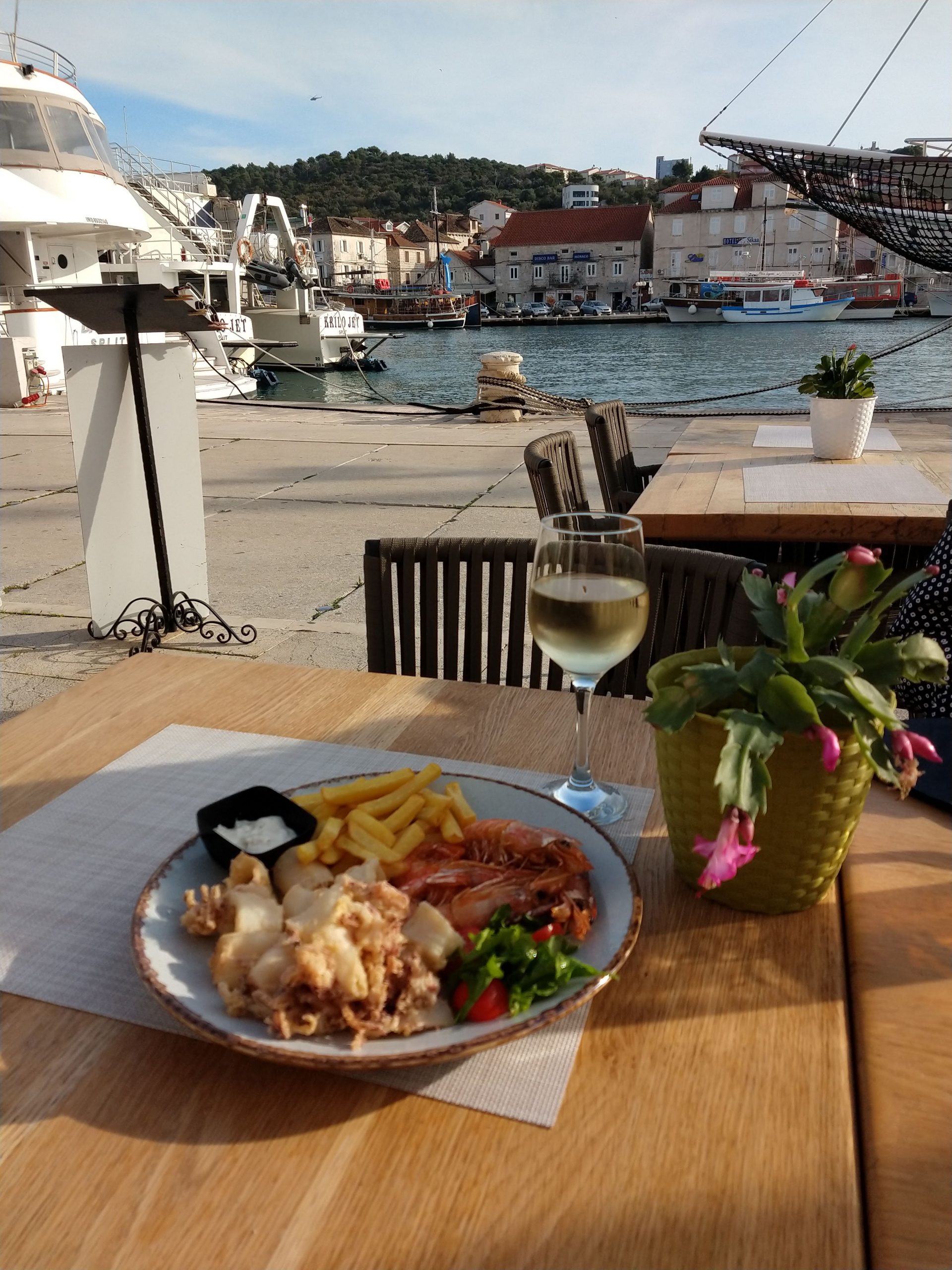 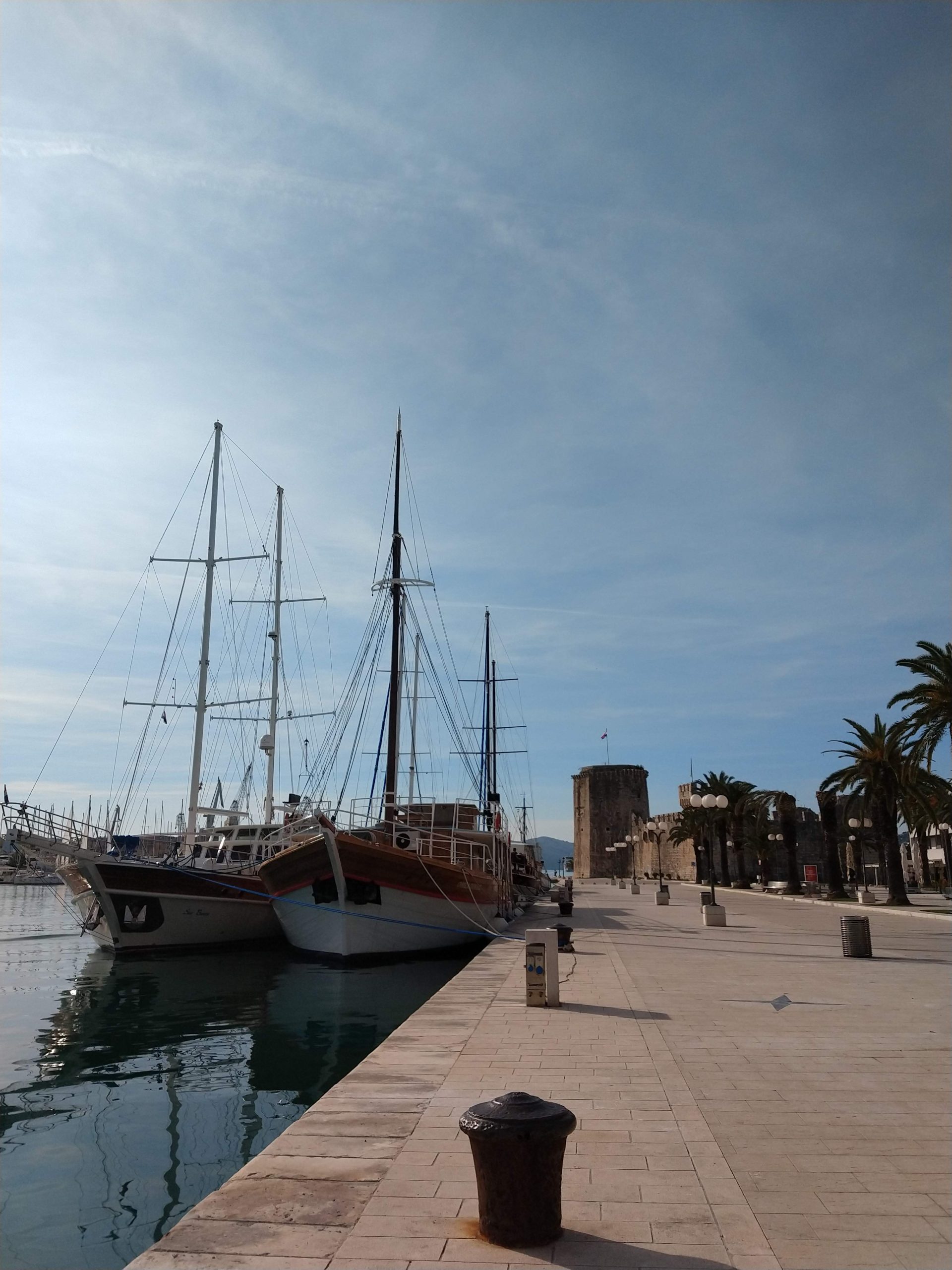 and Trogir’s is wide and welcoming,

popular with young and old. A bulwark of a fortress, Kamerlengo Castle, another Venetian addition, anchors one end. 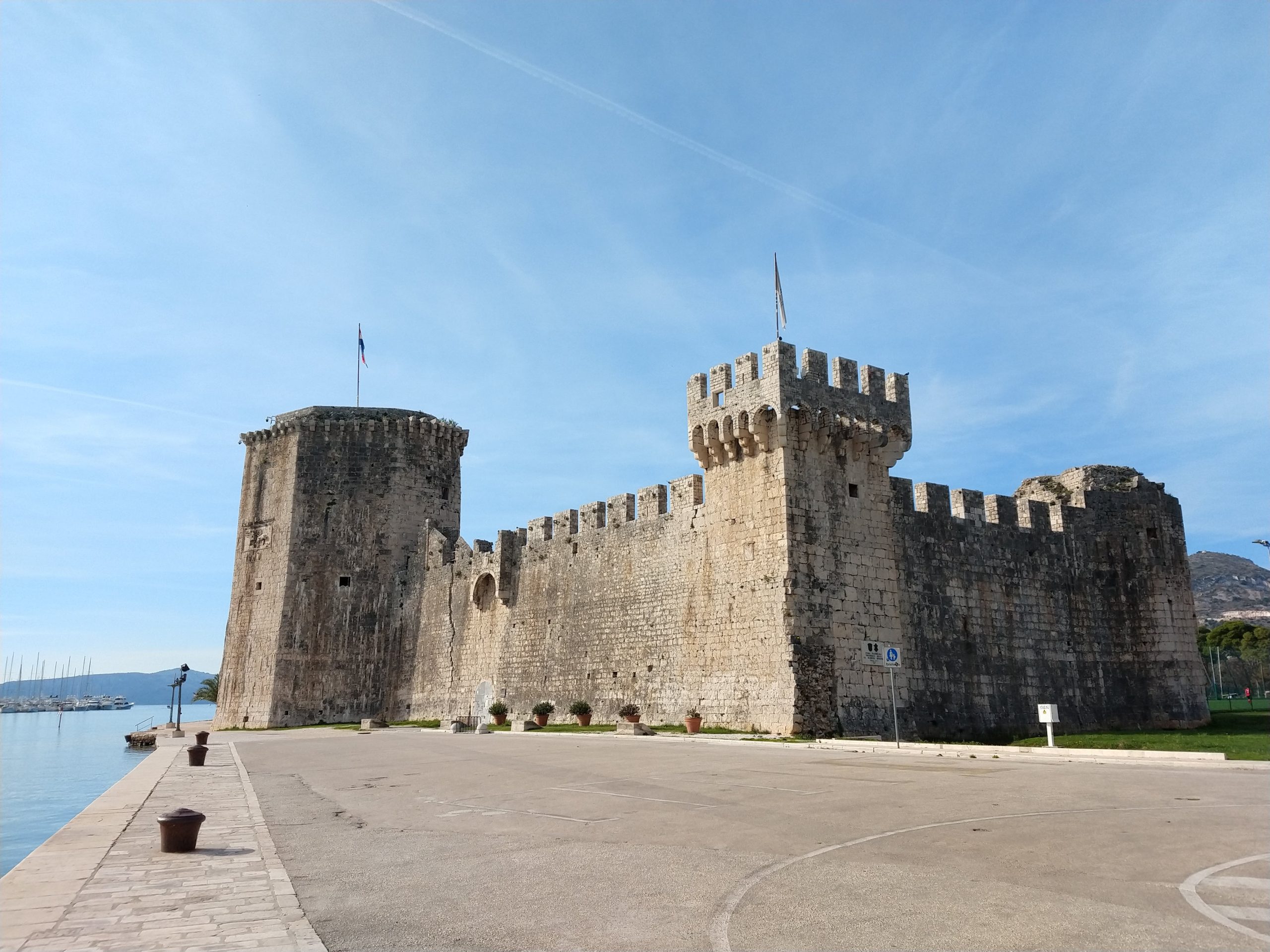 Turn right at the fortress, and a soccer field fills the space between it and a later tower, St. Marks. 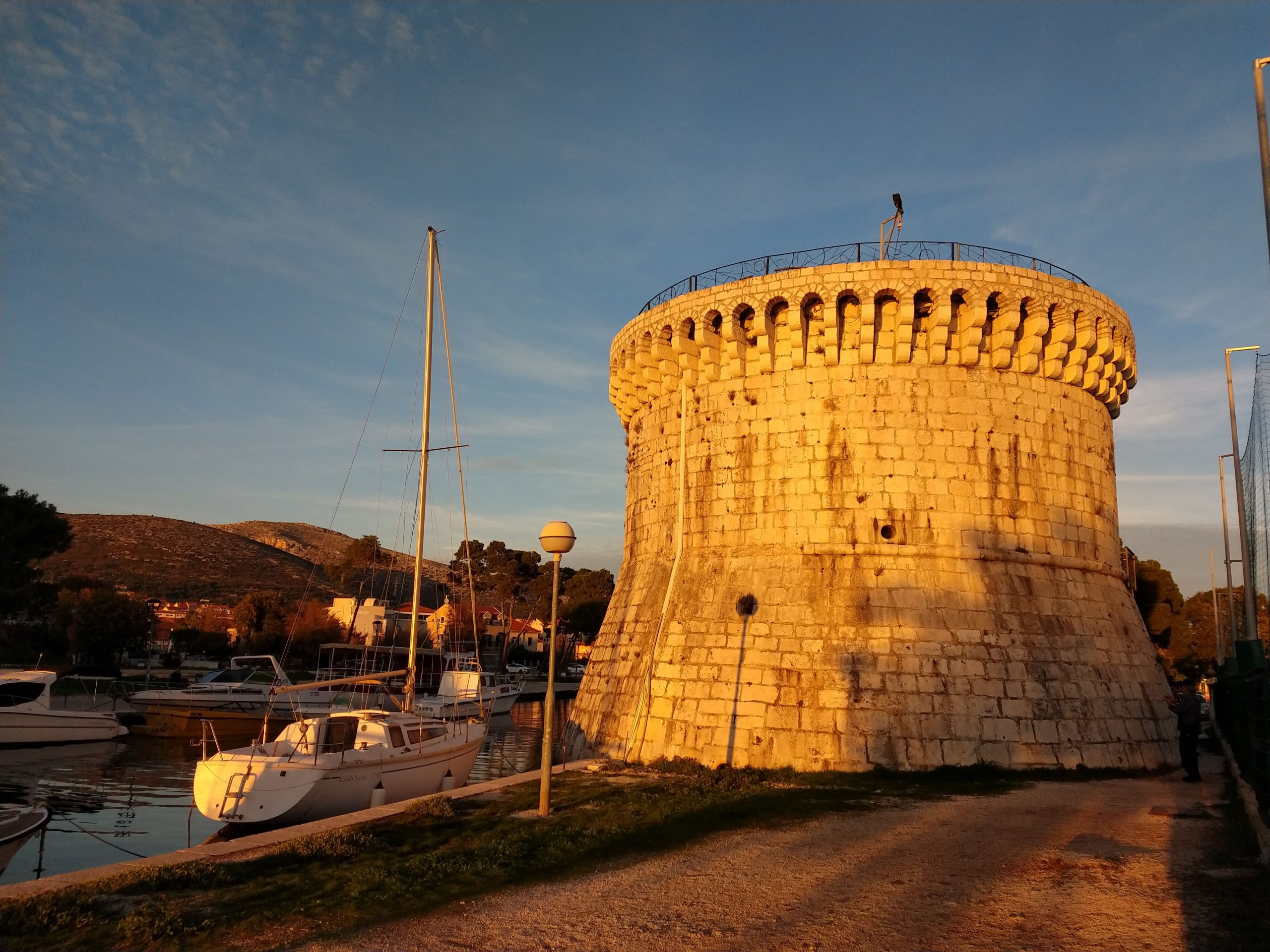 This must be the most fabulously located soccer field in the world!
As the sun sets, we take in the views from one end of the Riva 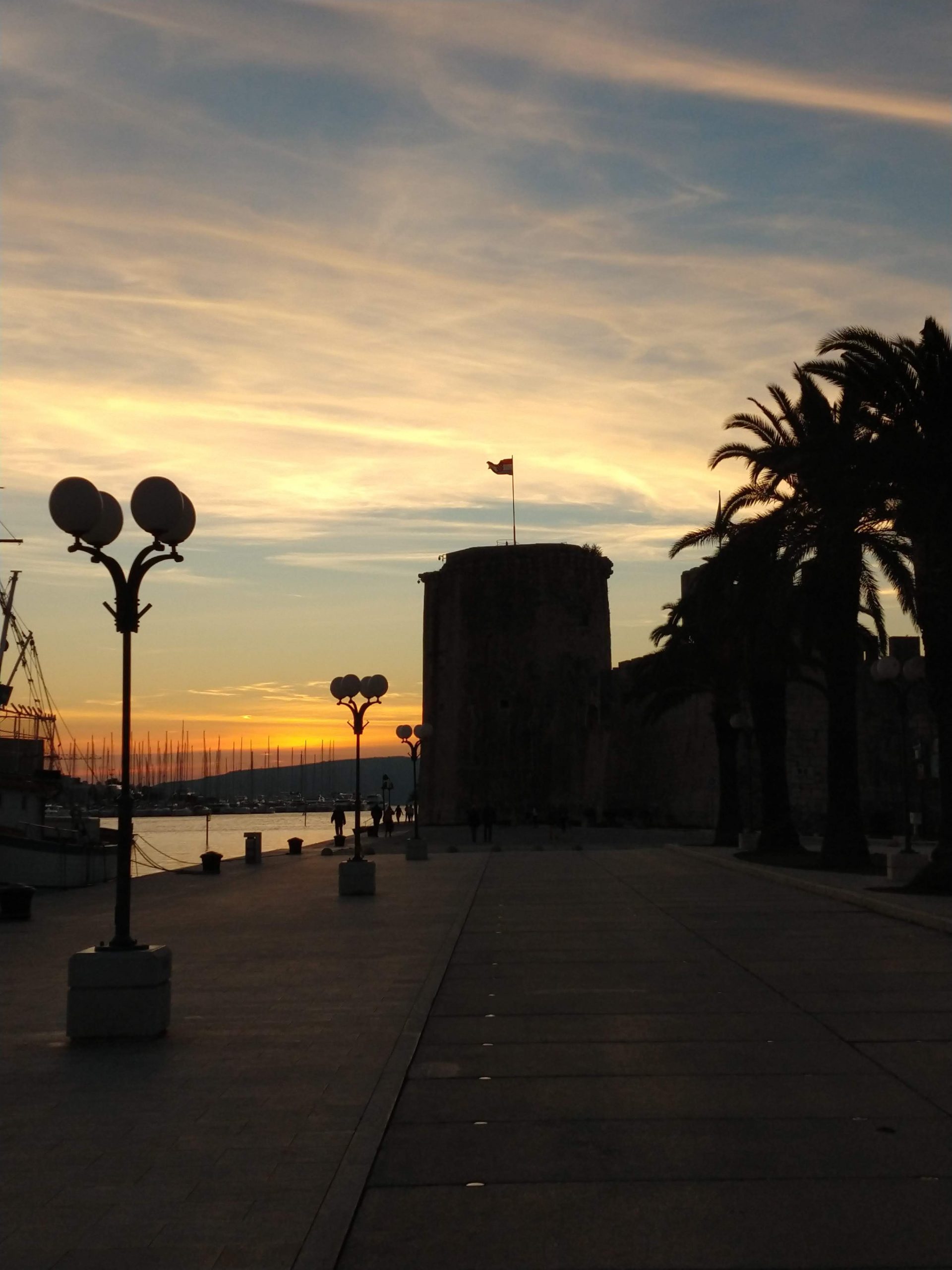 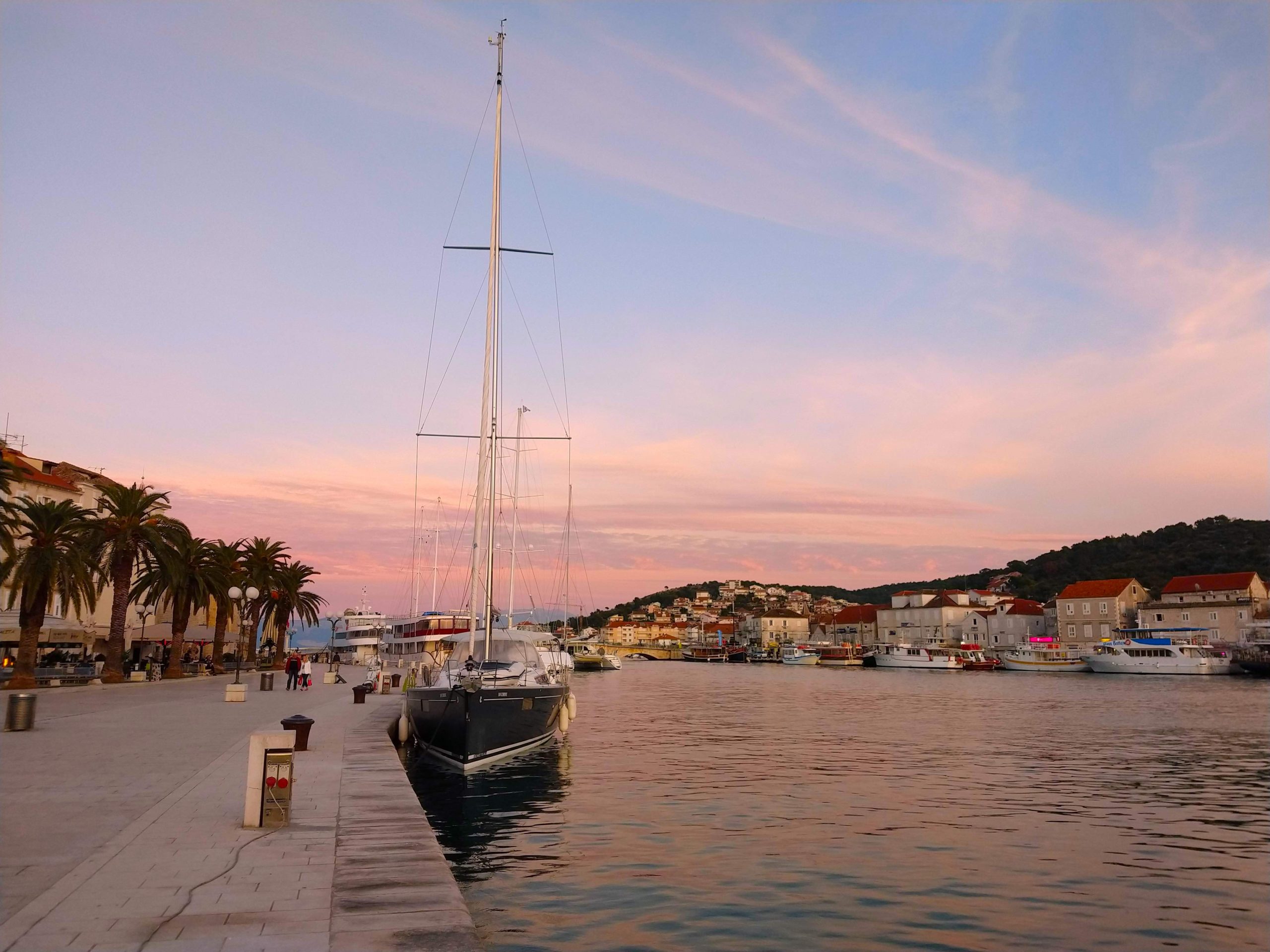 and take a final stroll inside the walls. The ancient town hall twinkles with fairy lights, 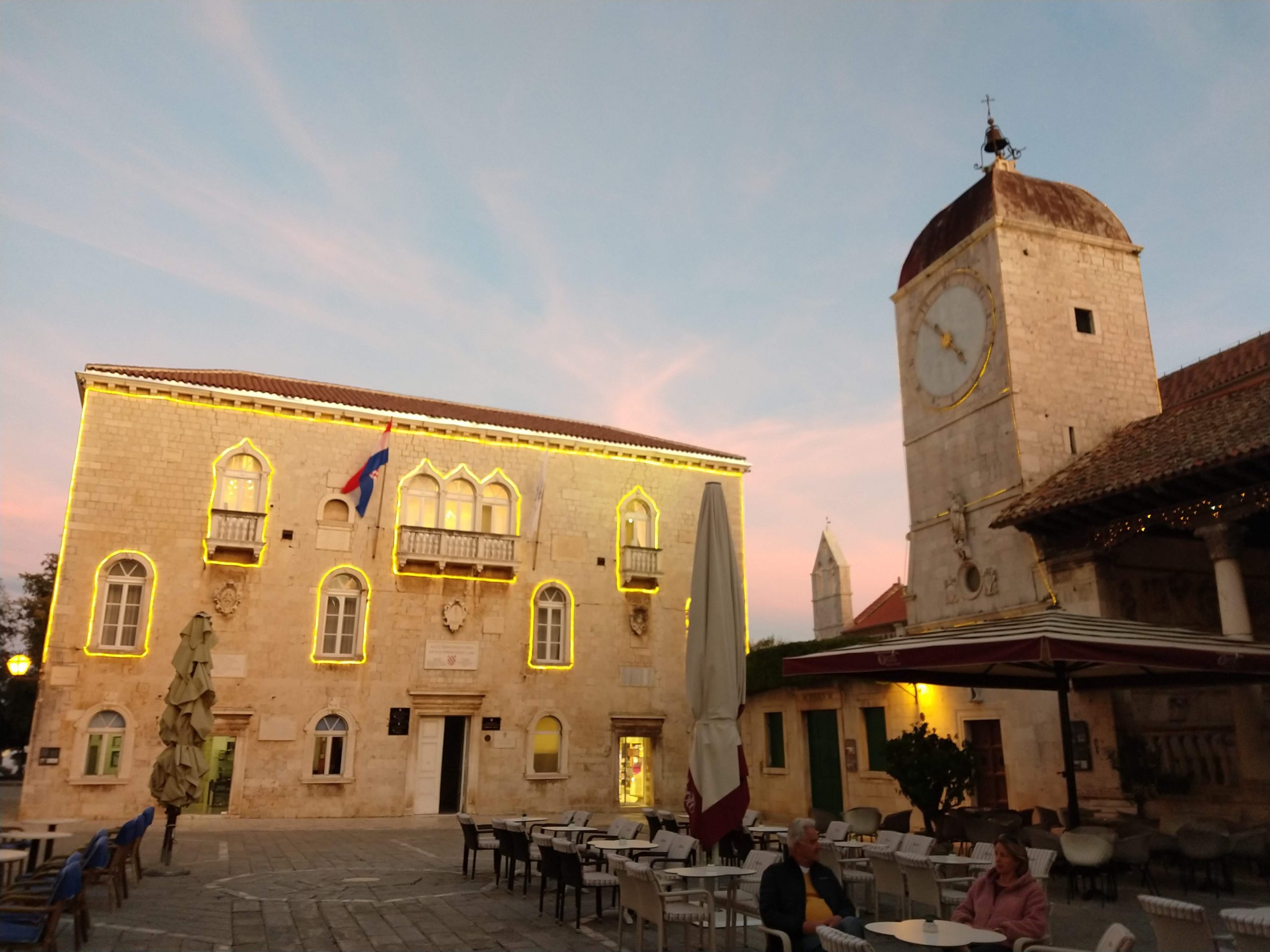 and we stop for one more look 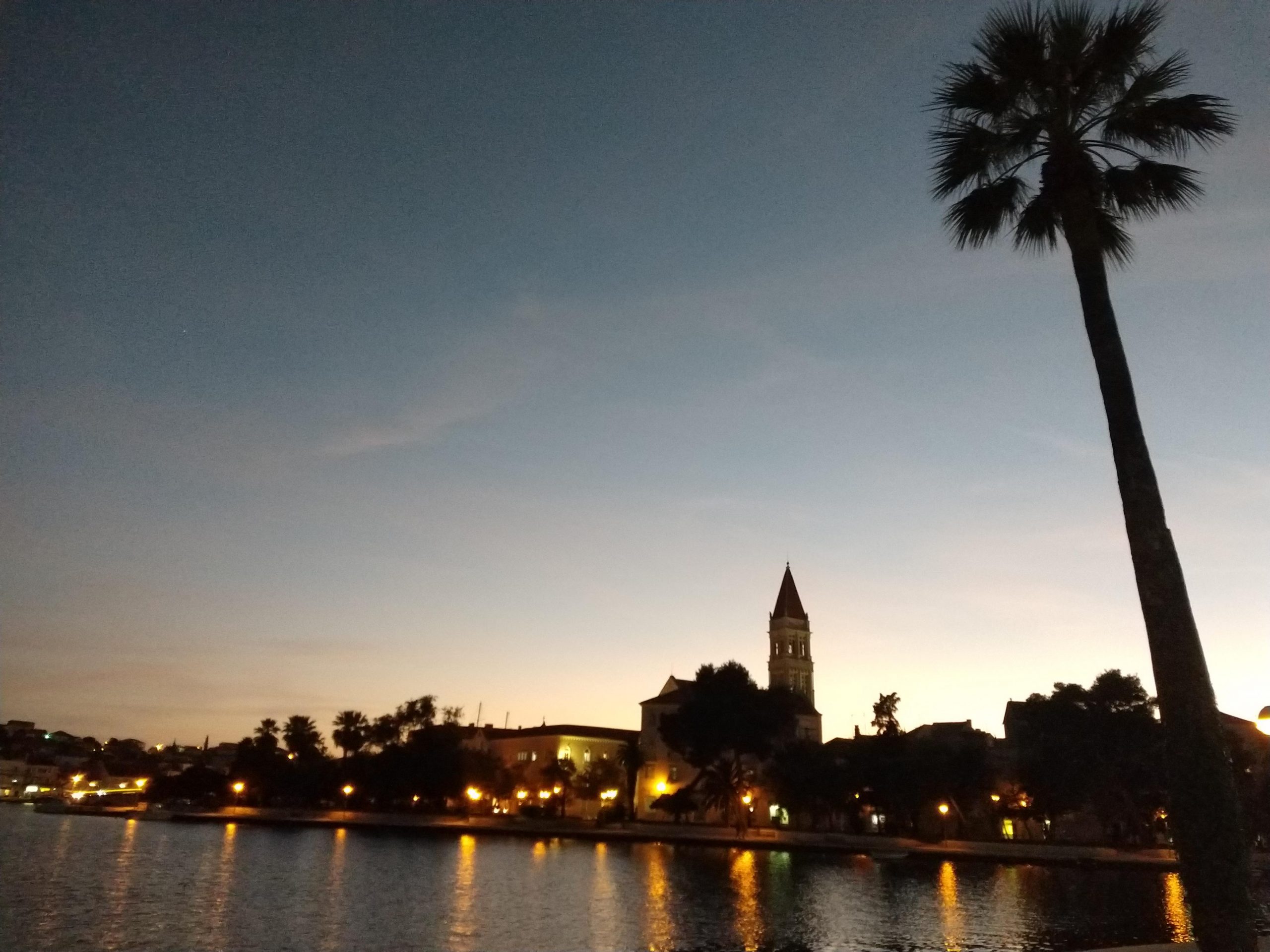 before driving back to Split. Yes, we filled the whole day with the delights of tiny Trogir! 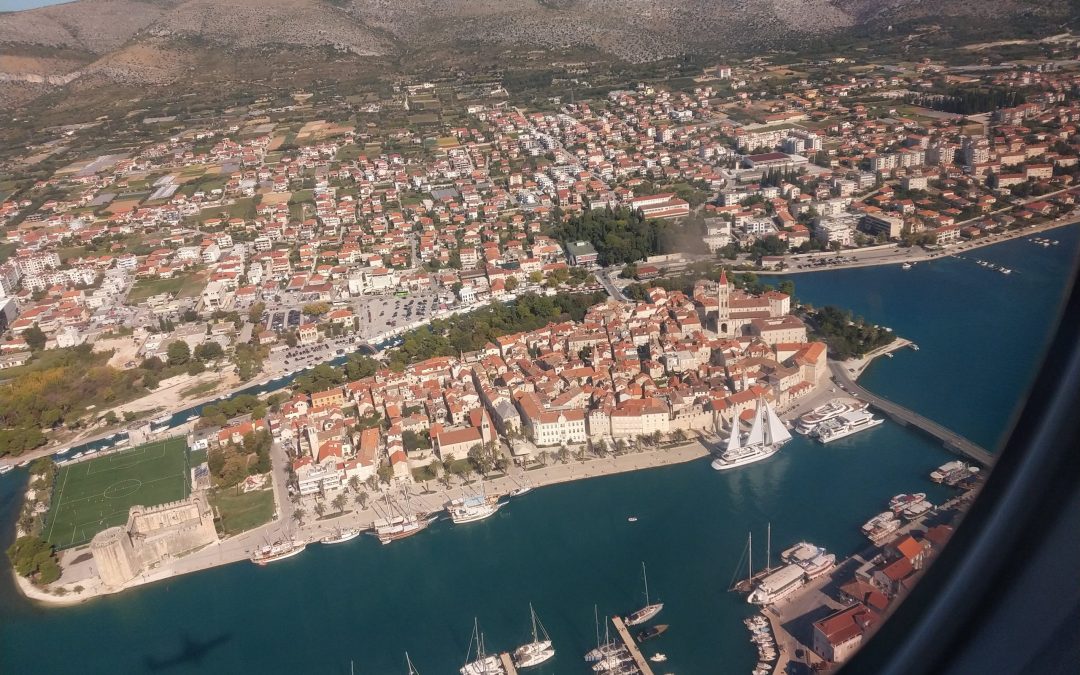 Plan A: Sell our US home in 2020, move to our much-loved apartment in Aix-en-Provence
Covid derailed that plan for sure – no Americans can enter France since March! So where to live now that all of our belongings are in storage after the sale of our home? We’ve got to live SOMEWHERE – but where?
Plan B: Fly to the ONE European country allowing Americans to enter – Croatia! 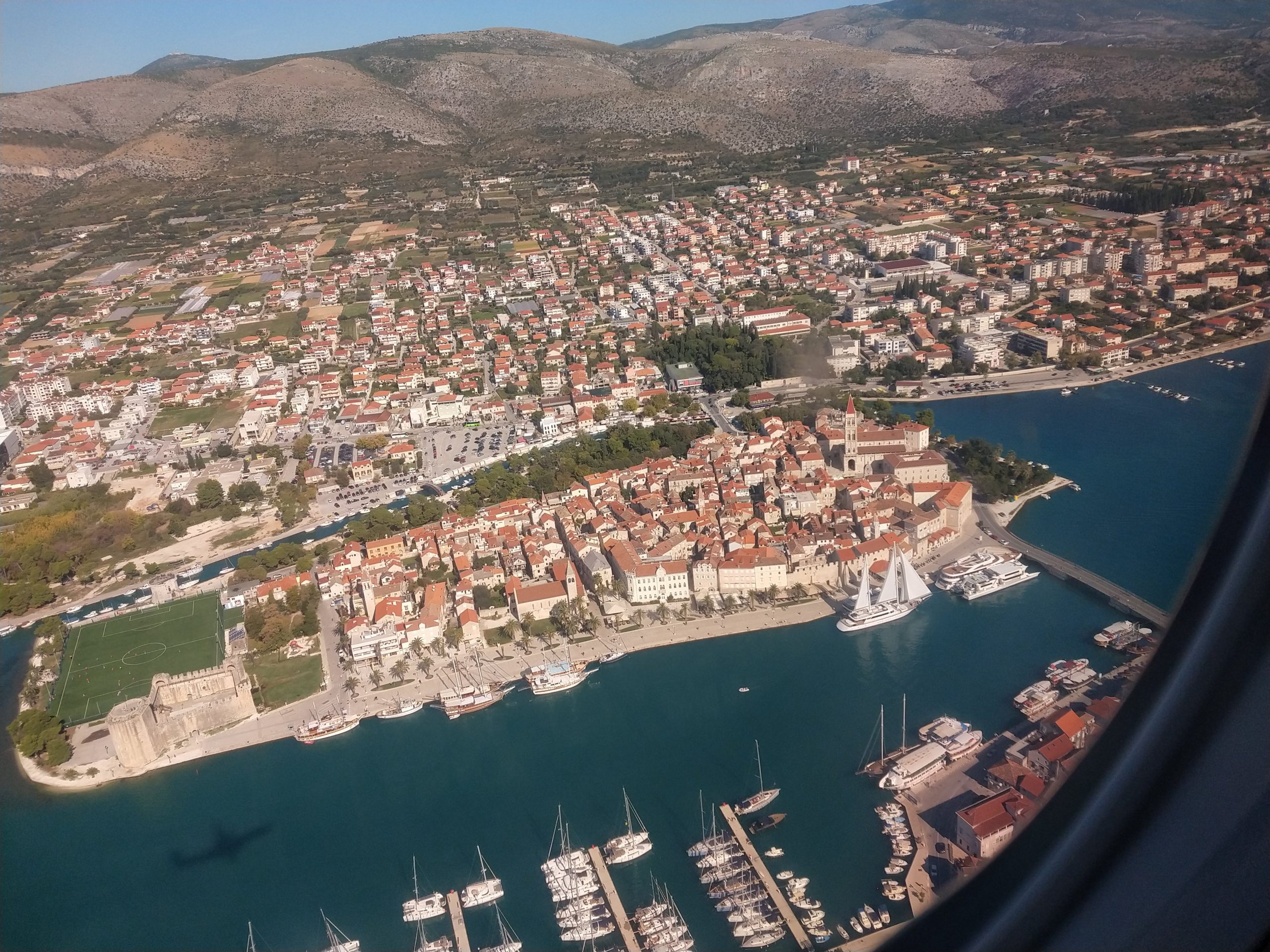 So here we are, in a wonderful 8th floor apartment in Split, chosen for its view of the sea as well as required comforts for an extended stay. Split is Croatia’s second largest city, after the capital, Zagreb, and is located on the gorgeous Dalmatian coast, facing Italy.
For those who may be interested in spending time in this beautiful country, here are the ABC’s:
There are specific requirements for entering Croatia as an American: proof of lodging, and a 14 day quarantine, unless you present a negative PCR test taken within 48 hours of landing in the country. Of course we chose the test route, although we continue keeping to ourselves, as we did when living in Virginia. Finding a facility that promises a 48 hour turn-around was a challenge – and since we were not symptomatic, but were getting the test for travel, costly as well! We chose My Doctor’s Pharmacy, not far from our northern Virginia home, and took our self-administered tests 2 days before our entry into Croatia, driving to the rear of the pharmacy and following the instructions of the pharmacist who handed us the tests.
Before traveling, we made sure to print out transit requirements for Germany, since that was our route – Washington-Munich-Split, in case we were asked to show permission to transit. We also printed out the Croatia entry requirements, and receipt and appointment verification for our PCR tests.
Our entry requirements were confirmed at check-in in Washington. Before landing in Germany entry forms were handed out to all to be completed – we asked if we needed them as we were transiting. The flight attendant did not know, and said to fill them out to be safe. As it turned out there was no need for the forms – we walked off the transatlantic flight and directly to our gate for the Split flight. No questions were asked as we boarded.
When we arrived in Split we went through passport control, and at that time were asked from where we originated, where we had been living, for the address of our lodging (although we had been told we would need a receipt proving payment for lodging, that was not requested), how long we were staying, and test results – well, the emailed results had not yet arrived! The kind and helpful agent asked for our phone numbers and emails, apologized and said we’d have to quarantine until we received the (negative!) results, and we said no problem. He gave us a phone number to call – a health agent for the Dalmatia region – with the results. Once the negative results were confirmed, we would be taken off of the list of people who would be checked on to make sure they are quarantining for the required 14 days.
We called an Uber to take us to the apartment, met our host, Boris, elevatored up to the 8th floor, and were immediately drawn to the view – 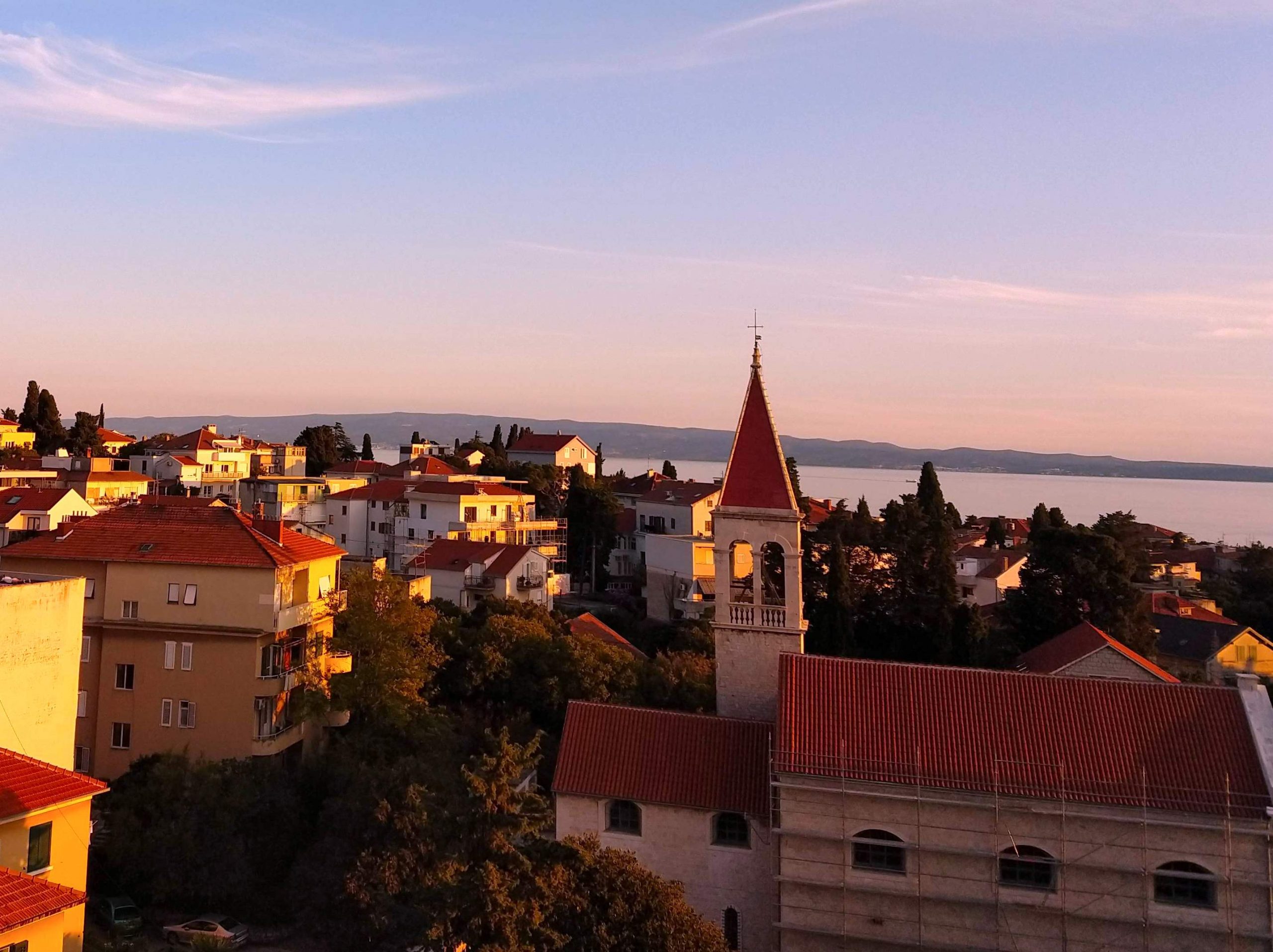 isn’t it spectacular? We certainly wouldn’t mind self-isolating here while waiting for our test results! We asked Boris if he would make that call for us when we received the results, and he did so when they arrived within an hour or two.
We were free! So walked downstairs to a nearby market, bought a few supplies, and made a pasta dinner to enjoy on the balcony, 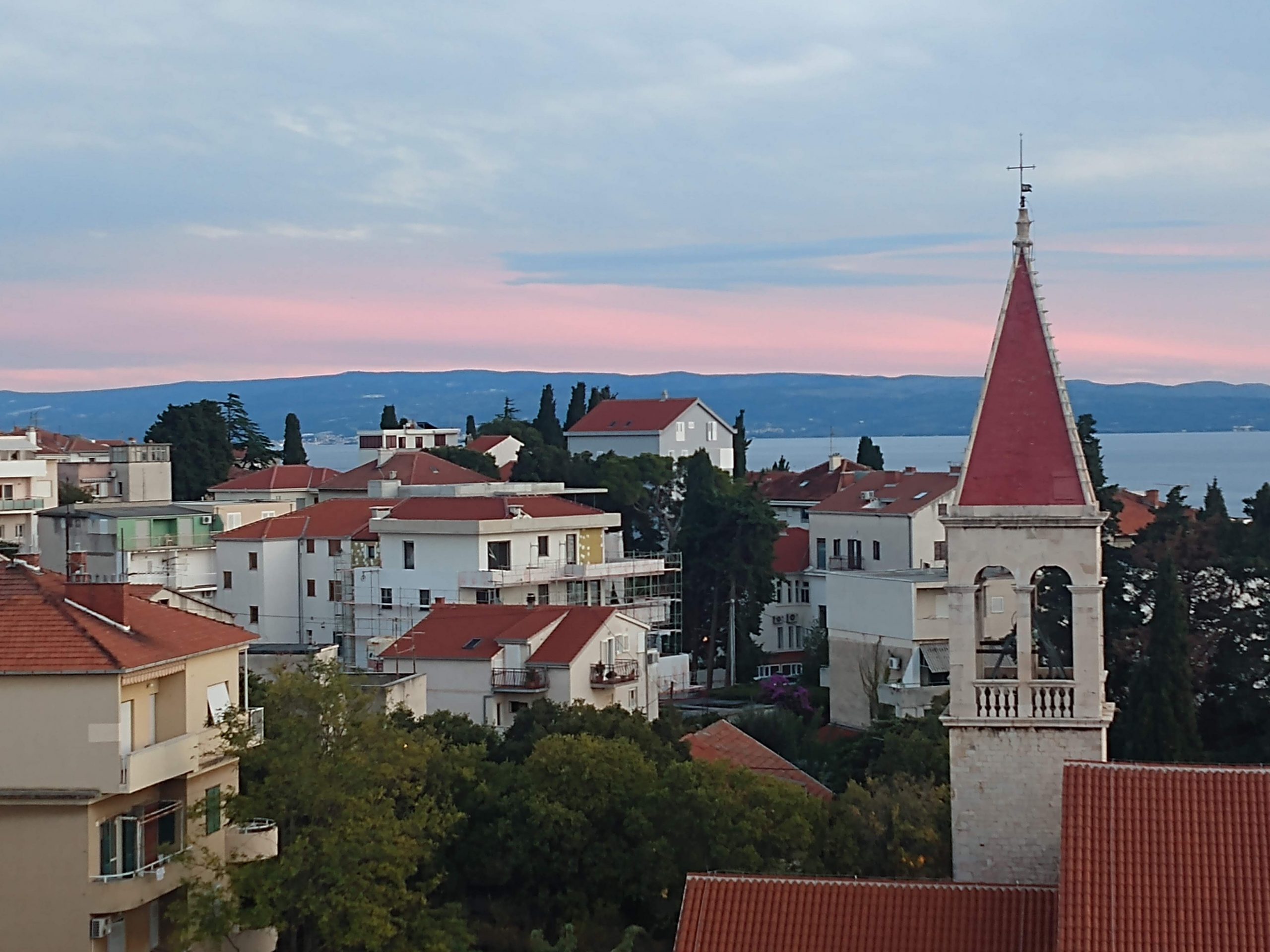 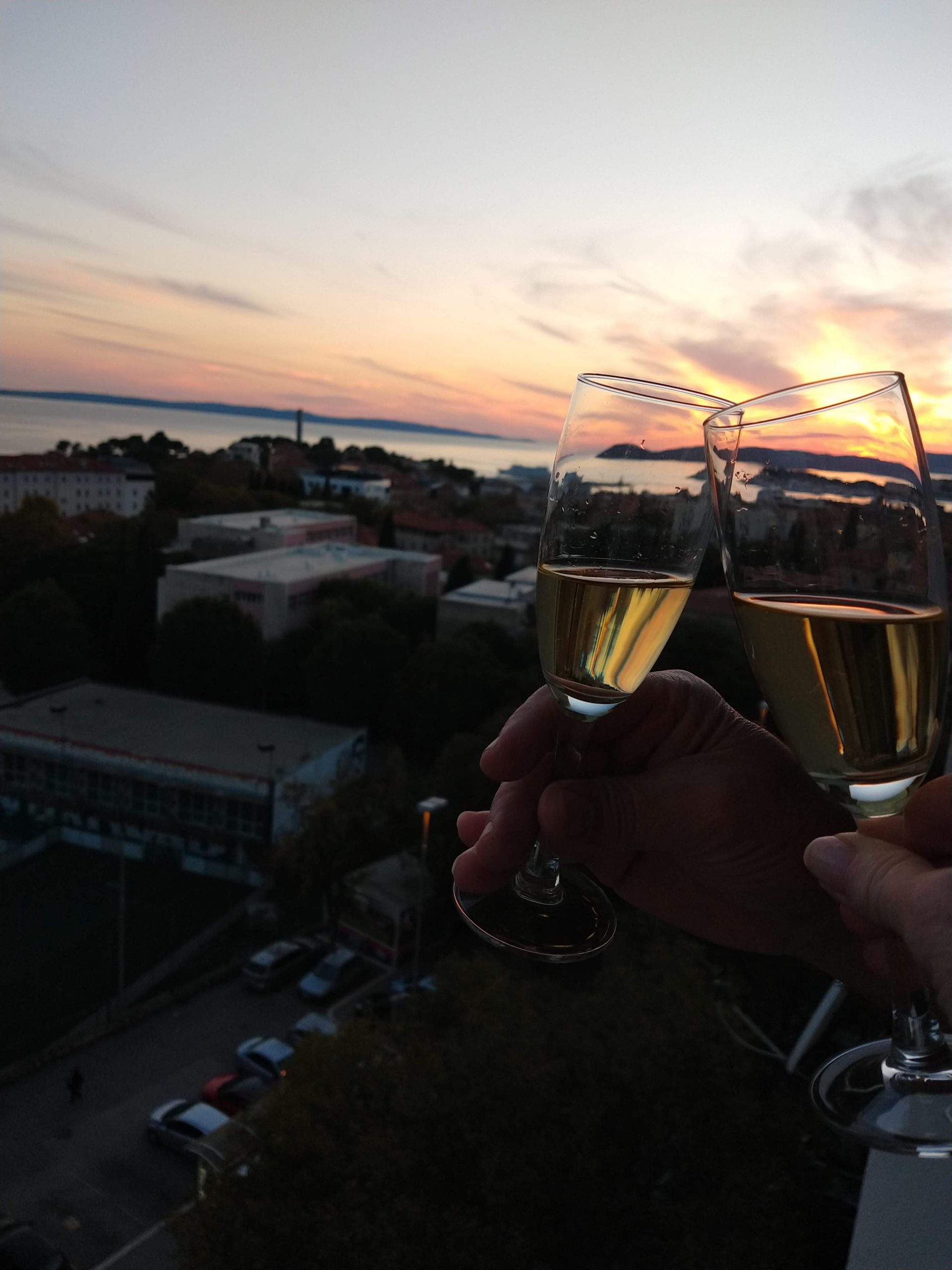 and our safe arrival – hooray for Plan B!
Coming up – the ancient center of Split, island visits, and more, as we revel in the beauty of daily life in Croatia.