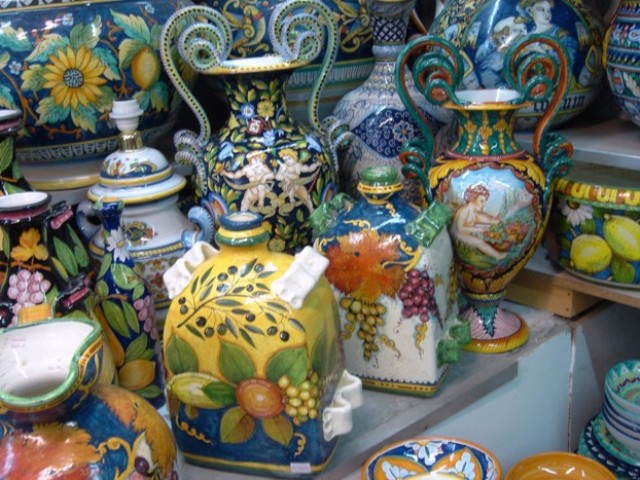 After that August interlude in France with our grandaughter, let’s return to Italy, picking up where we left off on the Amalfi Coast.
On this summer Sunday, a few of us want to fit in a morning hike 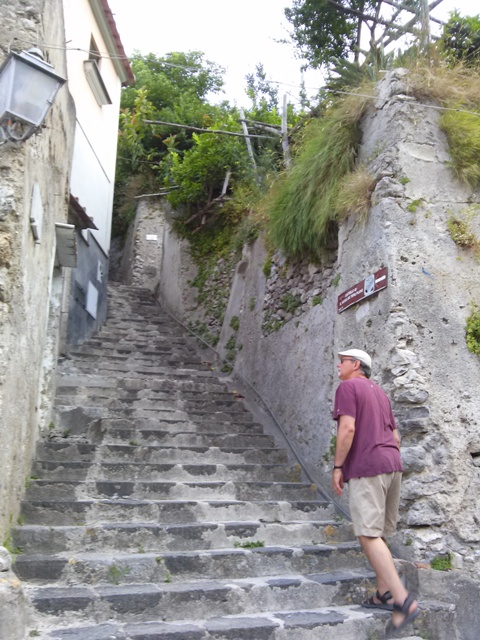 to the Castle of San Nicola de Thoro-Plano above Maiori. In reality the old ruins cannot be considered a castle in the literal sense, but a protected area consisting of a fortress built (beginning in the 800s!) as a bulwark and refuge for the population against the frequent attacks of the outlaws from Lombardy and later the Barbary pirates. 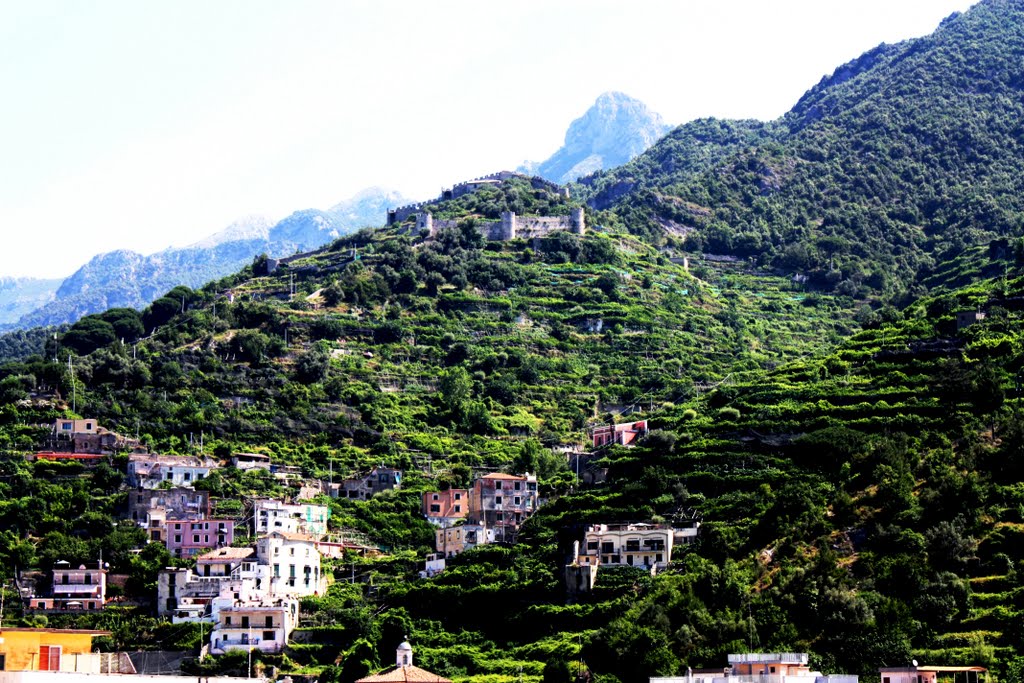 The three of us are joined by a couple of playful pups, 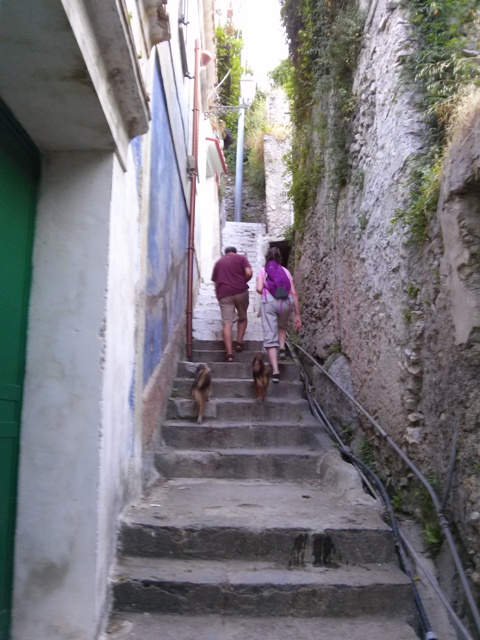 and as we pause for a look at the town and sea below, 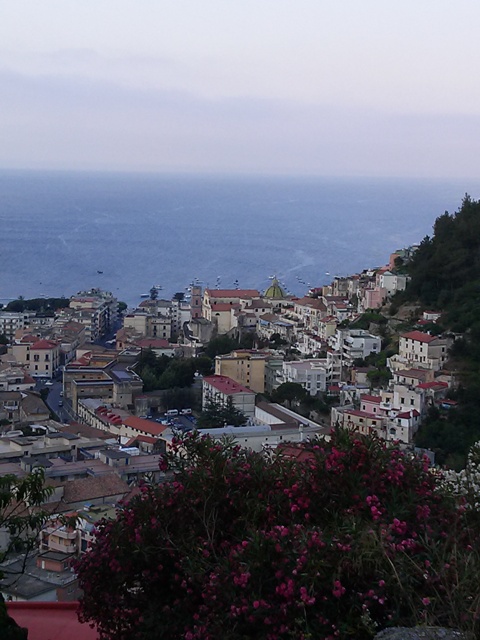 they rest for the final climb. 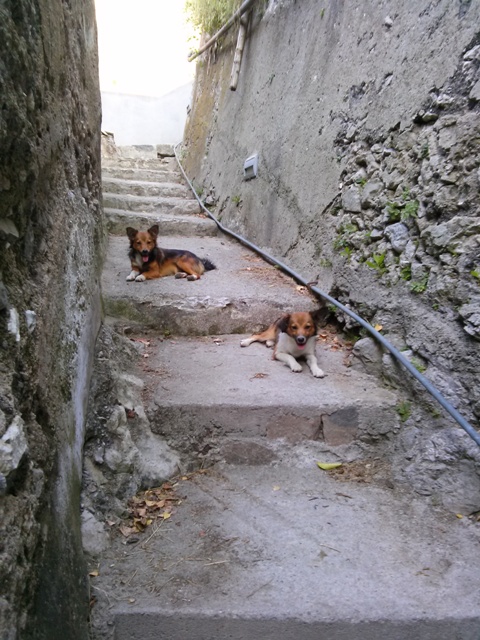 Inside the fortified perimeter there were once barracks and shelters able to house a large battalion and hundreds of citizens seeking shelter, but today just one man lives there  – here’s his mailbox. 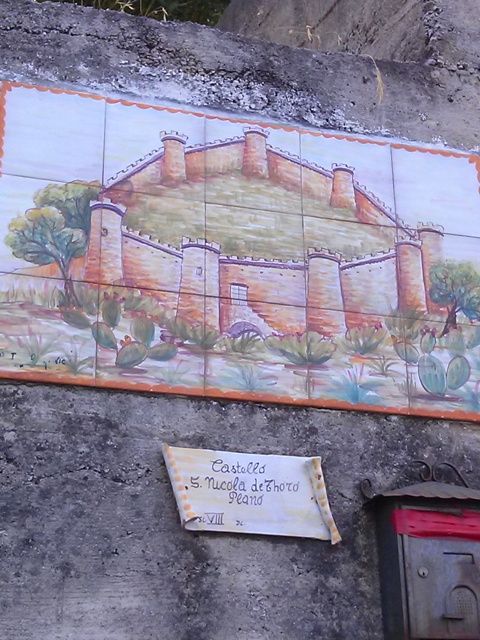 We pass him on his way down for morning coffee and newspaper. Wow – he must stay in shape with this at-least-once-a-day trek up and down!
Kirk and Jenny go all the way up, 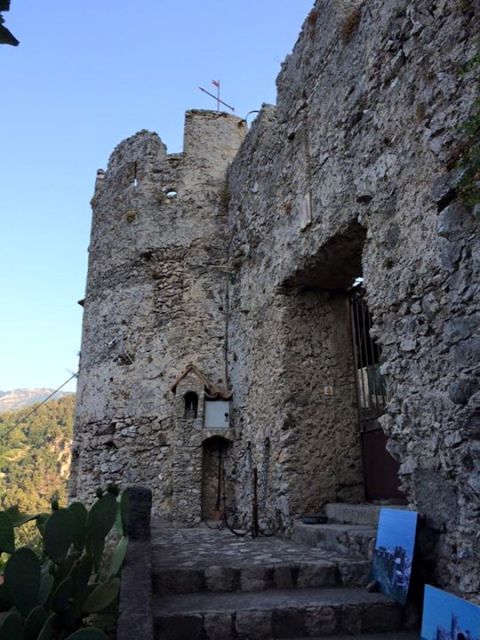 and walk around the fortress as far as there is a passable path. 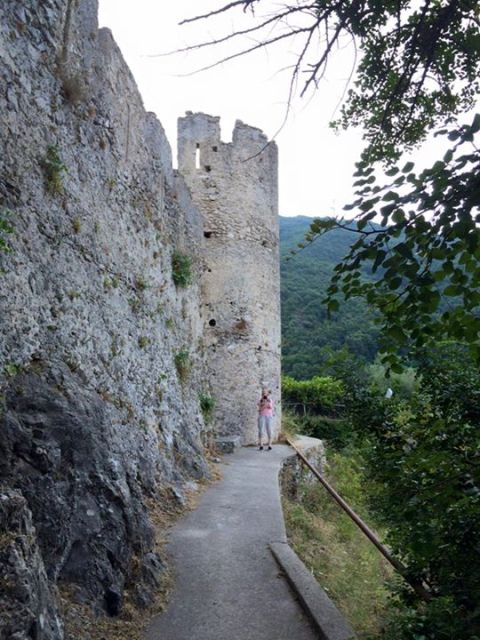 I chicken out on the last part of the hike, and enjoy the view, along with a cat taking a morning stretch. 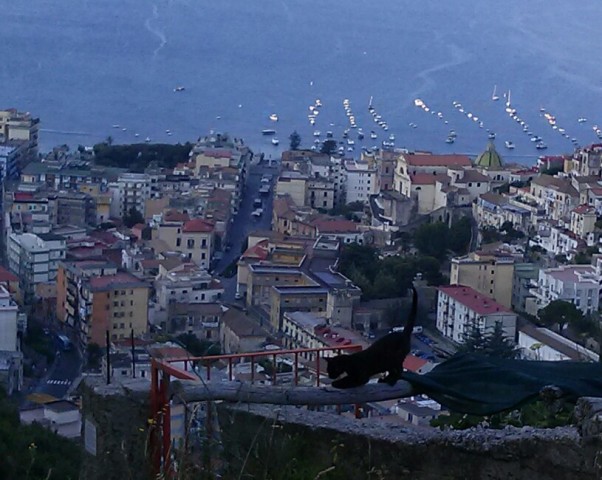 As I sit, a young teen comes up, unlocks the storage shed under the stretching cat, and hefts out several jugs of red wine, then takes them down, two at a time, multiple flights to a car parked below. 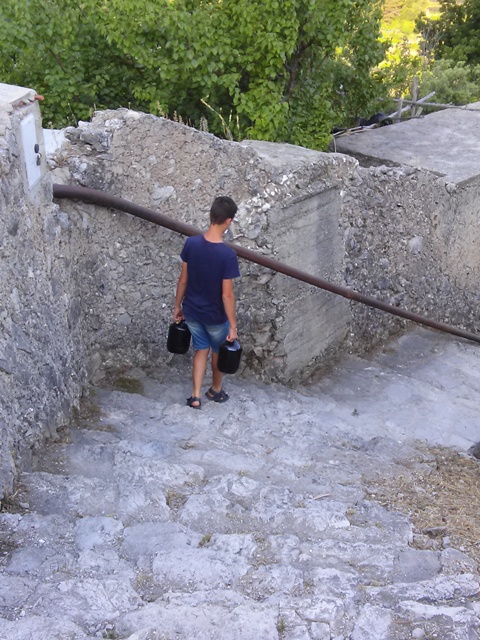 Soon Jenny and Kirk join me, and as we begin our descent, we’re stopped in our tracks as sunlight tinges the town below 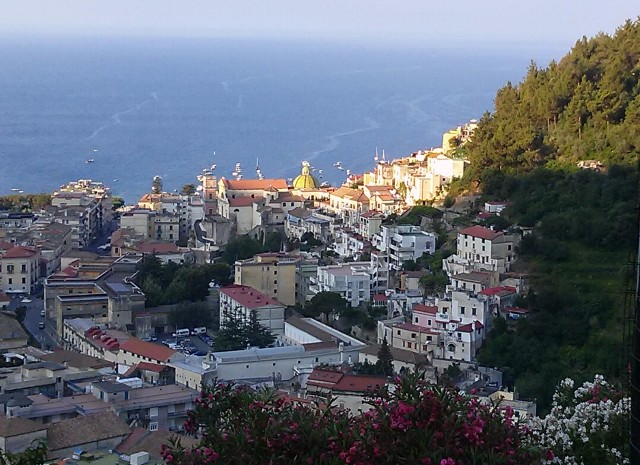 and Sunday bells ring out over the valley.
The descent goes more quickly, of course, than the ascent, and soon we’re back in Maiori, 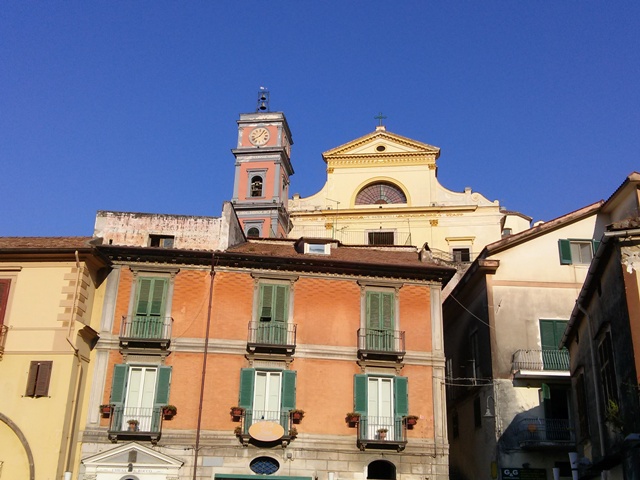 where it’s time to pile in the car for the winding drive to Vietri sul Mare, 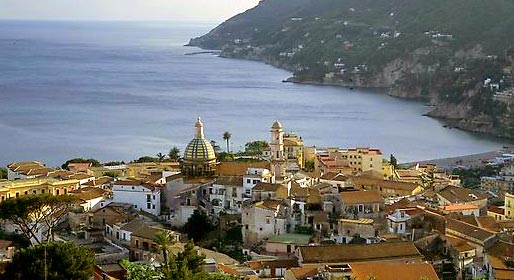 famous for ceramics since Roman times.

One artisan has designed a wall of tiles telling of the history of the village, pirate attacks and all. 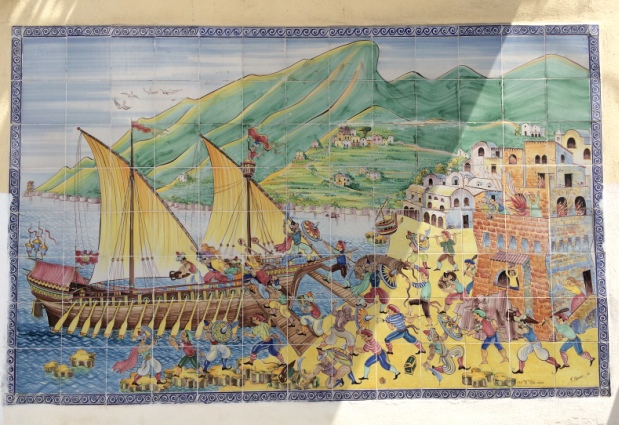 A bit of shopping, a bit of posing, 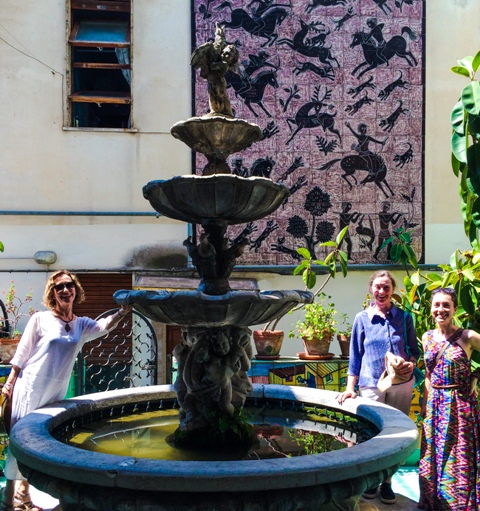 then back to Maiori for lunch by the sea. 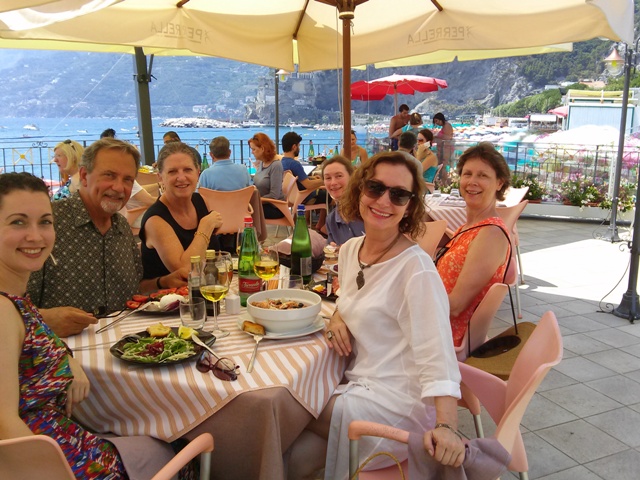 El Dorado has quickly become a favorite, and although I plan on a healthy salad for lunch, I can not resist the lemon ricotta ravioli. 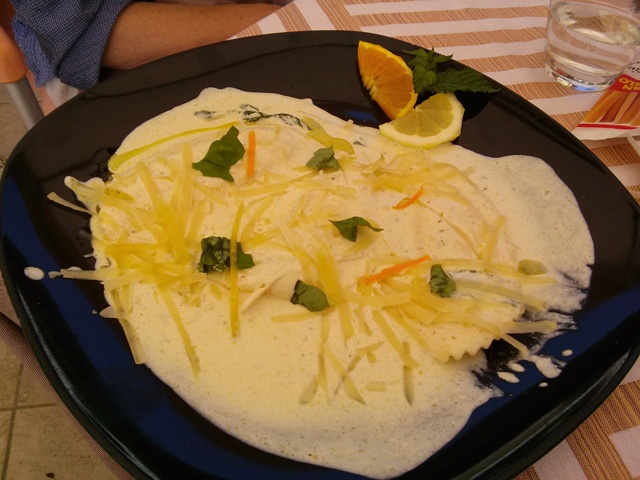 We’ll soon be leaving the coast, and where else would I find such luscious lemon pasta?!
The smoked swordfish and eggplant parmesan is also delicious – as is everything we order. 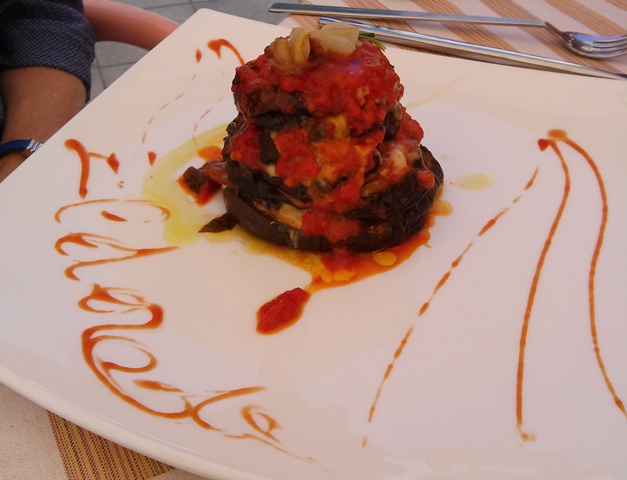 We’re celebrating today – it’s Olga’s birthday, and her daughter has traveled long and far to join us for a few days. More festivities this evening…to be continued-